In the early dawn hours of this last Saturday before Halloween in Savage, Minn., “Surf the Murph” trail racers were greeted by unseasonably warm temperatures–at least for us Minnesotans. Some of the costumed runners were even showing some leg, albeit fairly white leg. Who would have thunk it this time of year? 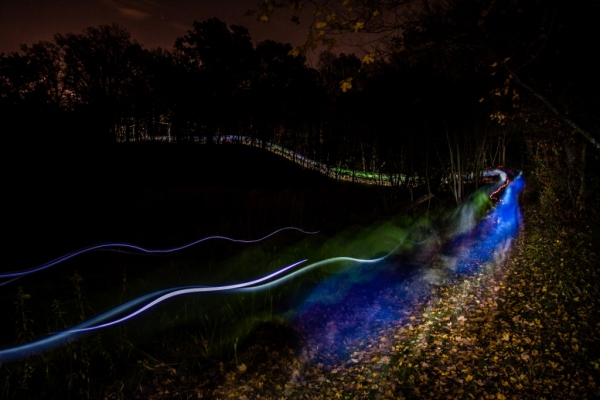 Racers creating a colorful display by surfing the course before dawn. Photo by Bryan Cochran

Not to be outdone by the runners, two Holstein cows and a puma presented the racers with their race supplies and left them to tidy up their outfits before commencing the parade of colorful lights up and down the still-dark trails of Murphy-Hanrehan park, just possibly resembling night surfing. 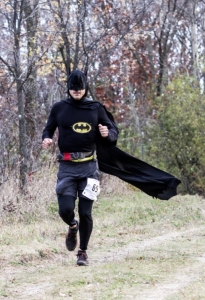 Batman (a.k.a. Christopher Lofgren) battling the course looking for the bad guys. Photo by Bryan Cochran

However, prior to race start, the Grim Reaper announced the disheartening news that Smurf Village had been destroyed by the little blue guys. Rest in Peace Smurf Village. (Actually, the park staff had told us the previous day that the trails informally known as Smurf Village could no longer be used for the race.) The abandonment of Smurf Village greatly saddened us all; nonetheless, we did not point fingers at the lone blue Smurf (a.k.a. Matthew Varner) in the crowd and ask him for his alibis.

How appropriate it is that the Grim Reaper (a.k.a. Bonnie Riley, Co-RD) started all the races: 50 mile, 50K, and 25K. There’s nothing like running an ultra to simulate dying a slow death. But rest assured, there were plenty of superheroes to save the day from the Grim Reaper, such as Batman (Christopher Lofgren) and Batwoman (Heather Schlagel), Spiderwoman (Heather Sailer), and the crowd favorite, Michelangelo of the Teenage Mutant Ninja Turtles (a.k.a. E. Paul Christians). 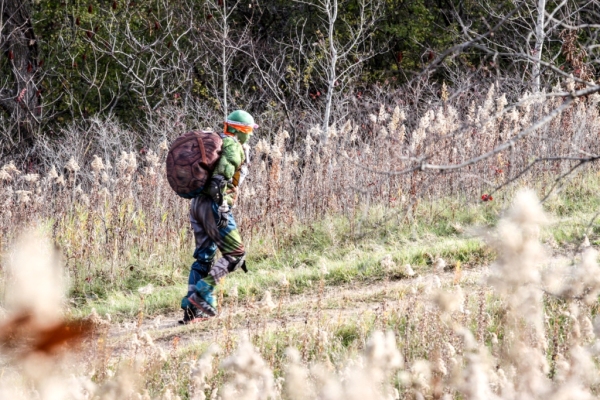 And save the day, they did. They bounded up and down among the high and low, surfed the dawn into the light, and some even into dusk on the variety of terrain this race has to offer: wide rolling ski trails covered in fallen leaves to the open expanse of the prairie to the wonderment of wooded singletrack. Consequently, the superheroes, and other costumed racers, were rewarded handsomely for their efforts in the form of gift certificates, swag, and the like regardless of their finishing places. 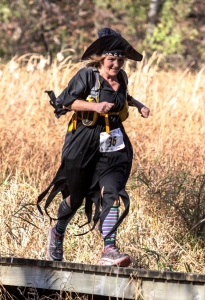 The Wicked Witch of the West (aka Karen Gall) is not so wicked when she is smiling. Photo by Bryan Cochran

A rare event occurred this year in that the first place finishers were also given part of the booty: Heriberto Vargas Olalde (1:59:19) and Sara Conrad (2:16:30) crossed the line first in the 25K, Brian Klug (4:44:23) and Erin Bell (5:59:13) were top finishers in the 50K, and Jeff Miller (7:28:16) and Alison Fraser (8:37:19) took the top spots in the 50 mile. However, in sticking with Surf the Murph tradition, in order to balance rewarding the quick-footed, the last place finishers in each race (who will all remain nameless, well, at least until you look at the results) were also given the same prize.

All racers, whether slow or fast, costumed or not, were again treated to branding their own finishing award with 50 mile, 50K, 25K, or in some cases branding a DNF on their award. If you can get off the starting line and start surfing in this race, you deserve an award. 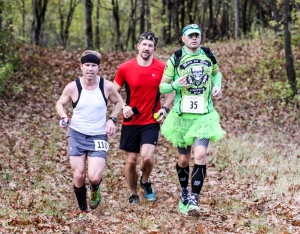 David Treichel (#110) questioning what superpower the guy with the green tutu (aka Derek Frank) is hiding. Photo by Bryan Cochran

In summarizing her race experience, Amanda Leightner reflected, “This was my first 50K, and it was such an amazing experience. I don’t think that I could have made a better choice in picking my first ultra. The whole course was very well-organized and your website had excellent and detailed information. The volunteers on the course were amazing and I loved that the whole thing had a ‘let’s have fun’ atmosphere. I can honestly say that it was one of the best orchestrated and enjoyable races that I have ever had, and I have been racing for seven years.”

We couldn’t of said it better ourselves. Thank you to all of our incredible organizers, volunteers and racers! See you all next year.

For more information on the “Surf the Murph” trail race, visit http://www.surfthemurph.org.