What’s the next best thing to having a personal masseuse? My answer would be having your own massaging tools. But the tricky part is figuring out which massage tools to buy. So consulting a review such as this is a good start.

I have been using the Moji 360 and Moji 360 mini massagers for a many weeks now while trying to recover from my usual training and racing. The Moji self-massagers separate themselves from other similar products in that the massagers contain many all-directional rotating steel spheres, some smaller and some larger in size.

Ask any engineer that works closely with metal and you’ll find out that steel is one of the hardest metals out there. But just don’t ask the engineer for any explanation, because you’ll find yourself lost in useless information (at least to your situation). I would know because, yes, I asked my husband, a mechanical design engineer, if steel is one of the hardest metals. I wanted “yes” or “no” for an answer and let’s just say I didn’t hear a “yes” or “no”, but many, many other words. However, I was able to decipher that steel, in general, is a very hard metal so I’ll stick to that simplistic answer. 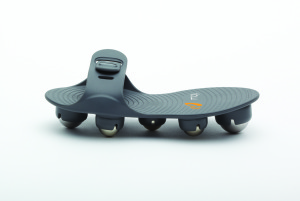 The advantage to using steel in a massage tool is that it allows you to apply more pressure with less effort than other materials found in other massage tools. This allows you to easily apply deep pressure to those sore muscles. In other words, you can really dig deep into your muscles.

I know many people like the feel-good, relaxing massages that practically put you to sleep. However, I prefer to rub out my sore muscles with some power. Steel is just the thing to do the trick. 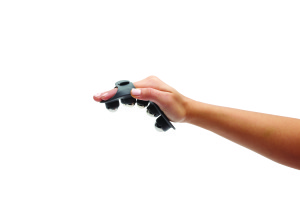 For hamstrings, I found it easiest to self-massage by putting the Moji 360 or the Moji 360 mini on a chair or stool and sitting down such that the massager is under my upper legs, so that the spheres are directly pushing into my hamstrings. For my hamstrings, I am not able to apply enough pressure at the necessary angles without this method.

For neck and lower back self-massage, the Moji 360 does a great job, but for other muscle groups on the upper body, reach for the mini as you can more easily apply the correct pressure. For muscles, say, on your left arm, you only have your right hand to work with so the mini is your only option since the Moji 360 requires use of both of your hands.

Bottom Line: When your kids ask you to use “those new massagers with the balls” on their muscles, you know it’s a good product. The Moji 360 and Moji 360 mini combine to effectively self-massage your entire body. In my opinion, the Moji 360 mini is the best deep tissue massage tool I’ve used thus far, thanks to the large steel ball that can be positioned right under the palm of your hand, enabling you to easily dig deep.

For more information, head to www.gomoji.com.