A race with 32 years of history hardly seems new, but 2014’s City of Lakes—the 33rd edition—qualifies fresh-as-a-daisy with its new half-marathon (USATF certified) distance and new name. Notably, the race is honored as the Minnesota Half Marathon Championships. This new version also becomes a component of the USATF Minnesota Team Circuit competition that includes Grandma’s Marathon, the Medtronic TC 10 Mile, MDRA Victory 10K and the Get in Gear 10K. Along with the distance change from its 25 km heritage, reflecting demographics and popularity of the half, novel considerations come into focus. 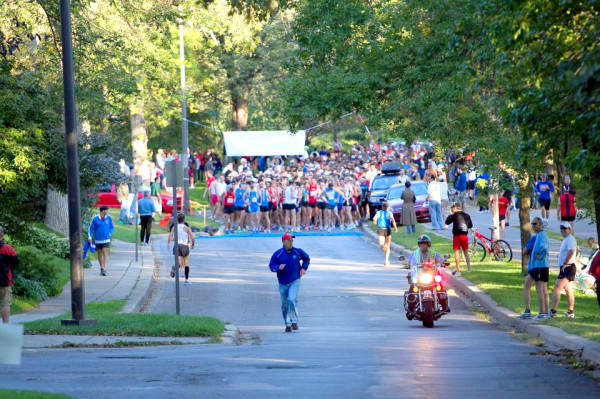 History: Jeff Winters running up to start the City of Lakes while admiring the motorcycle

This race brings out highly tuned athletes, but any runner can enjoy the event.

First, the records of old are now sealed. For example, the event’s 2013 record (along with the Minnesota state record) for 51-year-old men, clocked by Run N Fun’s Patrick Billig in 1:31:16 will stand the test of time. His time reset Paul Brown’s 1:33:36 from 2008. The state records may change as the Ron Daws 25K earns the new première event for this distance and finds top racers entering, but the City of Lakes records for the 25 km is set and done as are all the COL records. If you own one, congratulations . . . it will outlast you.

Secondly, new event records will be established starting in this race. Maybe new state records, maybe not, but most assuredly the winner’s times will constitute themselves as the Jeff Winter City of Lakes’ new standards. Plenty of these new marks, even all of them, may be broken over the years, but the first record holder’s spot will be held for all time in history. For those who have the shot at setting one, make sure you toe that start line Sunday morning September 7 (8 a.m. on-the-dot!) to capture yours. Plus, there are cash prizes to pocket both in overall classes and in Masters’ classes. Set a Minnesota single-age record, tally $100; let the party begin.

Even the race packet has a new pickup location; Running Room has a brand new address in the Uptown area of Minneapolis: 1433 West Lake Street. Can’t make it? The remaining ones will be available at the race starting at 6:30 a.m. 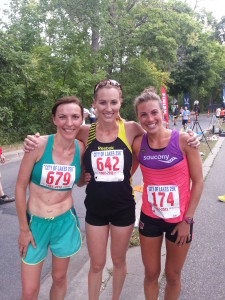 Carrie Tollefson (center) with Michelle Frey, winner (r) and unidentified No. 679. If you know her name, send it to me.

With the half marathon a whole new race course unfolds. Yes, the start line remains on the same side of Harriet though earlier, just past the tennis court area now (Beard’s Plaisance). Yes, the new race cruises same Lake Harriett and Lake Calhoun, but a very interesting change shows in the mileage markers. Consider this: Leaving Lake Harriett for the first time, crossing William Berry Parkway to Lake Calhoun, one approaches 36th Street, the intersection for Lakewood Cemetery, considered one of the more beautiful cemeteries in this country. Olympic Marathoner Ron Daws is interred on the hill overlooking Lake Calhoun. The race date is within ten days of the 144th year of the original dedication of Lakewood. One has to ignore the advice in the movie “All My Friends Are Funeral Singers” to not breathe when passing any cemetery; that is difficult for a racing runner.

Just past that mark a runner has covered 3.1 miles (the 5 km split-time will be available) leaving an even ten to go. Turn it on! The next lap you come by that (approximate) spot, there will be just 3.1 miles remaining to the finish line. Call it 5K by 5K. As far as the race course goes, that will rank as the single most important intersection in the competition. 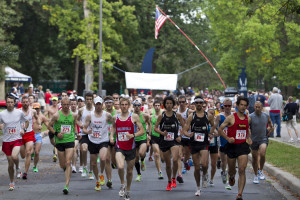 The 1.1 mile-to-go sign (though the course markings are even miles) sits across Lake Calhoun on the other side of 36th, just at the “crook” in the street makes itself known. Twelve miles done, 1.1 to go . . . get a jump on the person in front or the pack around you waiting for that mile-marker to make their move.

The finish is much different, too. Instead of a long flat stretch to the line rounding Harriett for the final time, an uphill starts the finish on William Berry Parkway leaving Calhoun then changes to a wonderfully fast downhill reaching chute glory just past the entrance to the major parking area for the band shell, docks, and concessions. That marks the finish, sure to make for some interesting finishes (pass city!) not only at the front but also within the ranks of the pack. 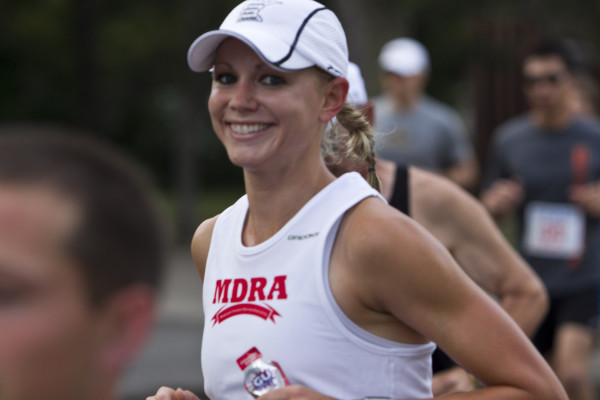 The half marathon distance provides a benefit for those who want to complete a marathon in training exactly four weeks before the Twin Cities Marathon travels a good portion of this same course. Finish the race, collect your awards, put them away, take off your race number, stroll down to the start, and do it all over on your own. In ultra distance language, that is a doing a double. The new course offers this 13.1 miles at anytime of the year to practice a half, a marathon (or longer!) should you want . . . at no extra charge. 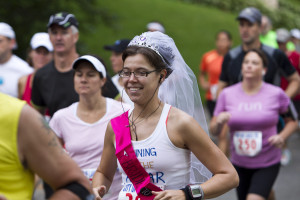 The City of Lakes has a colorful history that Jeff Winter (1943-2012) covered in a riveting 2003 article. Read it or reread it; this is a good time to do so. Consider it an honor for the Jeff Winter City of Lakes Half Marathon, most assuredly a Minnesota road racing tradition. Click here for a map of the course.