During summer months The Takshanuk Trail provides guests with a “bird’s eye view” of Lutak Inlet and the northern tip of the Inside Passage. 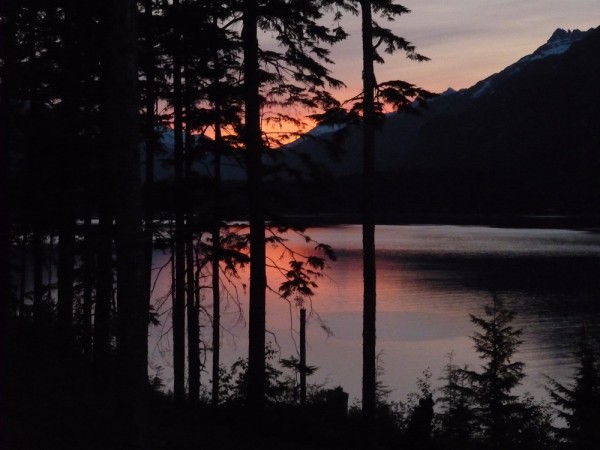 Wintertime seems as though it’s another world on the trail. The area receives harsh winter storms that produce heavy snows and high winds. These storms last for days and can leave behind massive amounts of snow in their wake. The winds can be relentless and brutal, blowing for weeks without a pause.

When a calm day arises, it’s time to get outside and play. There was a day in February 2012 that all storms had stopped and the temperature rose to a balmy 40 degrees by late morning.

My friend Barb (owner of the trail) and I decided to hike to the lodge to see what it looked like under a heavy snowpack. 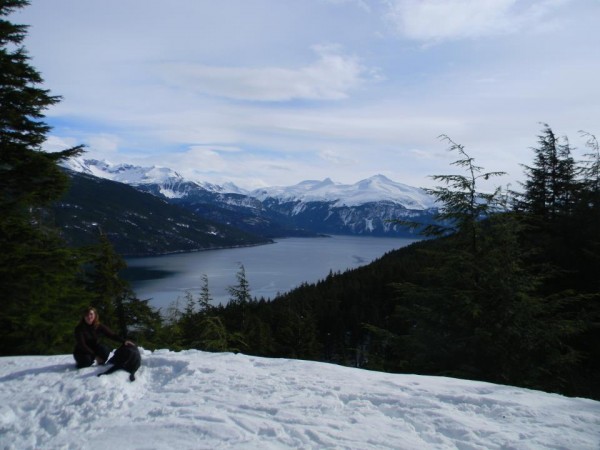 View from the Lodge
by Barb

Mount Ripinsky, a part of the Takshanuk Mountain Range is a favorite amongst the locals and many enjoy snowshoe trips up the mountain. The Takshanuk Trail ascends up the north face of the range; winding through coastal rainforest from 0 feet to 1,500 feet above sea level.

The trail begins ascending immediately, and with 19 steep switchbacks it rapidly picks up height until it reaches the lodge at 1,200 feet. Leaving the lodge, the trail winds another 300 feet or so through the trees and opens up into alpine tundra and spectacular views.

As we prepared for the hike, we discussed wearing snowshoes or hiking it in our boots. That was the big question! More than 30 feet of snow had fallen on the area during the winter, and it seemed that with the recent cold weather it would be solid enough to walk on. We decided against the snowshoes and began our climb. This was the wrong decision and soon enough we would realize it.

After a couple of switchbacks I noticed my legs slowly beginning to warm up. By the time we were rounding the third and fourth switchbacks the slow onset of burning muscle could be felt.

The frozen crust on the snow that keeps us from post holing is beginning to soften and while we are moving along at an easy pace, we are occasionally breaking through. 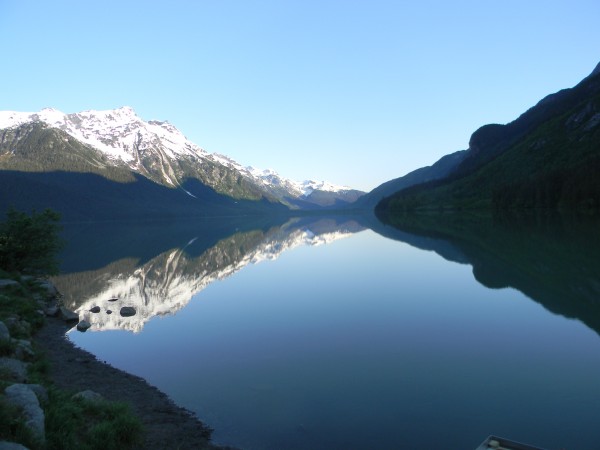 Rounding the seventh switchback my quads are burning and need a break; however sitting down is out of the question, it only makes it harder to get going again. We take only a minute to catch our breath and we’re off again.

At the 12th switchback we stopped to take another short break and enjoy the first of many incredible views.

By now the hike up seems to be getting easier, my legs are feeling like rubber bands and simply snapping into place with each step. (Are you feeling it with me?)

After a good hard push up the mountain we finally arrived at switchback 19. I could see the backside of the lodge, or should I say the mounds of snow that covered it.

The heavy snow had completely consumed the lodge, but walking around to the front  we were 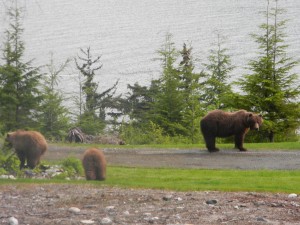 able to look “down” onto the door from a gaping hole the wind had carved out. From where we were standing there was approximately a 12-foot jump. The temptation to stand on the deck was too much for Barb; she found an area that looked like it could be maneuvered with some ease and quickly took the initiative to crawl down.Looking across the Lynn Canal are the beautiful snow-capped Coast Mountains that reign over the Inside Passage and south through British Columbia Canada. In the summer you can look down on the water and watch whales swimming into Lutak Inlet after the runs of salmon that are en route to the Chilkoot River to spawn.

When the excitement had subsided Barb pulled out a couple of hard-boiled eggs and granola bars from her day pack and we stood in front of the lodge and re-fueled our bodies for the trip down. 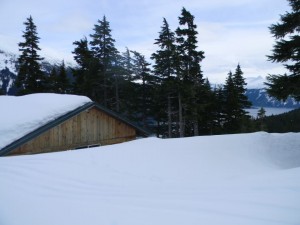 You know how sometimes, no matter how steep or hard it is going down, it’s just easier. Well I was glad to be heading down, at that point though I didn’t realize how much post holing we were about to embark on.  The day was warming and the thick layer of snow was quickly deteriorating. We made our way quickly for the first few hundred yards before reaching the warmer section of the trail. Breaking through was inevitable and soon we were post-holing every few steps.It wasn’t long until the old game of “try anything” came into play. I tried walking slow, carefully placing my feet on the snow. And, just when I thought I’d gotten away with a step, down! All the way to my thigh! After gathering myself, I’d pull my leg from the snow, straightened out and began the process over yet again. We practiced this step over and over again until we reached the bottom.Needless to say, things would have been much easier had we taken our snowshoes.