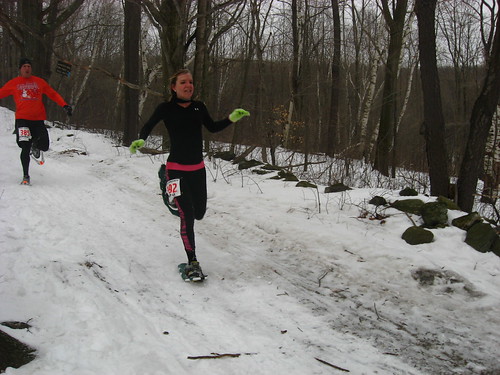 Saturday morning’s Moby Dick snowshoe race at the Mount Greylock State Reservation was the antepenultimate in this season’s Western Massachusetts Athletic Club (WMAC)/Dion race series. Having never attended a snowshoe race, I did not know quite what to expect. I was a competitive cross-country runner in high school and was briefly a member of a college team before realizing that the competition took away from the running for me. The way in which I have discovered and taken to snowshoe trekking in my mid-30s is as absolutely non-competitive as most people can probably imagine. I was left wondering if perhaps snowshoe racing might split the difference.

Race registration was underway when I arrived at the just reopened and still under renovation Mount Greylock Visitor Center shortly before 0900. I met race director Ed Alibozek face-to-face for the first time at the registration table and he hooked me up with a pair of Dion snowshoes to strap on while covering the goings-on. Sweet! 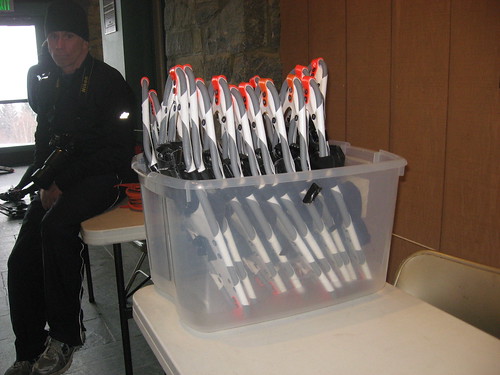 Dion Snowshoes are made available as $5 rentals at all WMAC/Dion series events. 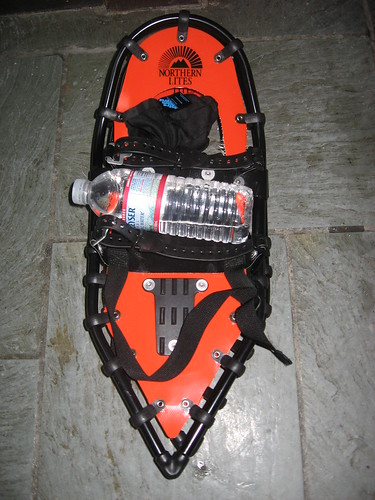 I made my way out of the Visitor Center and across the parking lot towards the starting line. Judging by clothing and gear, there was a notable road runner and mountain biker presence amongst the participants. Along the way a first time snowshoe racer was heard to say, “Even more laid back than a traditional trail race! Who knew such a thing was possible!” His initial impression seemed pretty dead-on when the 56 registered racers were easily enticed into performing a pre-race Harlem Shake.

The atmosphere may have been laid back but the course was not. The participants found wet and increasingly deep “unpackable” snow as they gained 900 feet in just over three miles from the Visitor Center parking lot up to Rounds Rock before beginning their descent. Easthampton resident Ross Krause was the first male and overall finisher of the 7.3 mile course in a time of 1:14:50. Williams College student Blair Robinson was the first female and eighth overall finisher with a time of 1:33:55. First time snowshoe racer and long time trail runner Bryan Stapleton—who had made the drive to Berkshire Country from Providence, Rhode Island—characterized the race as “quite a bit more difficult than trail running” but certainly enjoyable. Eighty-three year old Marlborough, Massachusetts, resident Rich Busa described the course conditions as “really hard.” And with eight Vermont 100 Mile Endurance Run finishes under his belt he certainly has background for judgement! 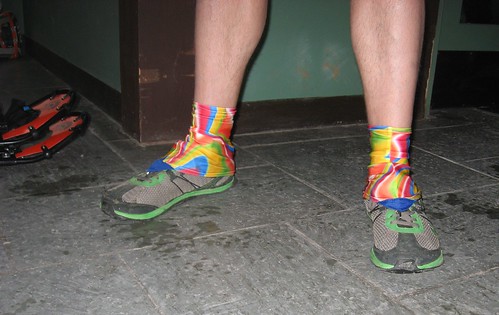 Trail runners and short gaiters round out the snowshoe racing footwear ensemble. 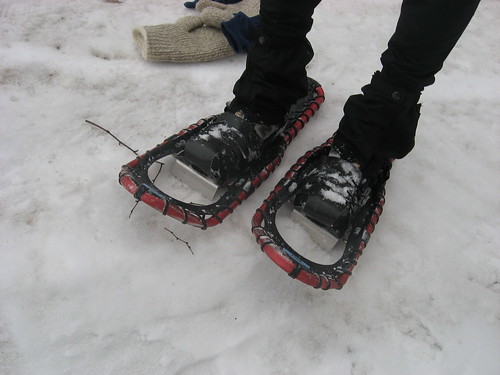 A pair of first run Sherpas!

But while times were recorded and series points were awarded, it was clear that competition was not the emphasis of the races in this series. Race director Ed Alibozek characterized the WMAC/Dion series as an opportunity for the athletically inclined to find enjoyment via time spent in the woods and interacting with a community of regular participants. “We think of the racers as links in a chain,” Alibozek said. “The last is as important as the first.” 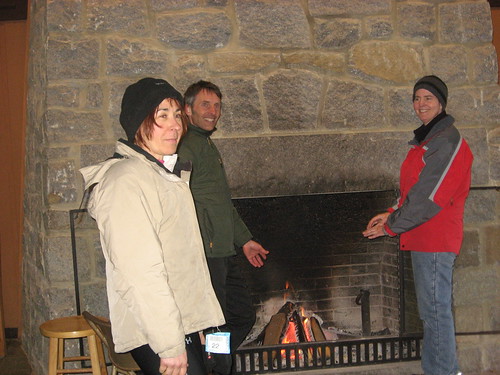 Northampton resident Laurel Shortell typified this spirit. She said that “[t]oday, I just had fun!” and that it was “good just to see nice people” at the race, as always. In addition, she had achieved a personal milestone with the completion of her 150th consecutive scheduled WMAC/Dion event since taking up snowshoe racing twelve seasons ago.

Now in its eighteenth season, the WMAC/Dion series is the nation’s longest running snowshoe racing series. Ed noted that when the size of the core group of regular participants in the series races began to near 100 individuals that additional snowshoe racing series began to appear in the Northeast. He viewed this not as a failure of the WMAC to continue to grow the series. Rather, he felt that it was difficult to maintain a face-to-face community at larger numbers of participants and that the creation of the additional series was a natural fissioning allowing for a sense of community to remain intact all around. Laurel echoed Ed’s sentiment in regards to the importance of community, stating that she felt that a healthy sense of community was a far better metric for the health of the WMAC/Dion series than was number of individual participants. Ed went on to state that any hypothetical end of the racing series mattered less to him than a loss of the community which the series has and continues to foster.