In the days and weeks leading up to the 2013 edition of the Phillips Flurry 5K and 10K snowshoe race, snow around northcentral Wisconsin was scarce–leading to a cancellation of the very popular Perkinstown Snowshoe race a week prior to Phillips.  Race director Kristi Speer asserted through her race website (www.phillipsflurry.com) and through race-broadcast Facebook updates that the Phillips Flurry would still go on, whether as a trail race (if ground cover was still mostly bare) or if by some traditional winter magic (a large dumping of snow) it would allow it be a snowshoe race as intended.  About a week before the race, a couple of inches of snow fell and stayed thanks to below-zero temperatures and then just a day before the race, another few more inches blanketed the landscape and the fresh powdery snow was a welcome sight to Speer and snowshoe enthusiasts alike (photos courtesy Adam Speer). 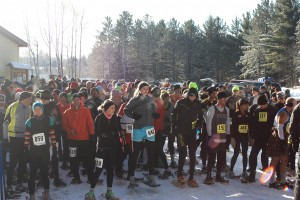 Racers awaiting the start of the Phillips Flurry

The course was well-groomed on its ski trails and stomped down sufficiently on its single-track sections, and this led to some fast overall times, the quickest in the race’s three-year existence.  Thankfully, the temperature warmed up to eight degrees by racetime, avoiding the -20F windchill temperatures that this area saw just a few days prior to Saturday, January 26.  The wind was still, but air movement would have been neglected anyways due to the course winding on the rolling hills through the dense woods of the Phillips School Forest.  More than 150 racers lined up for the 10 a.m. start time, with 132 (55 men and 77 women) participating in the 5-kilometer and also 26 (19 men and seven women) doing battle in the 10-kilometer race. 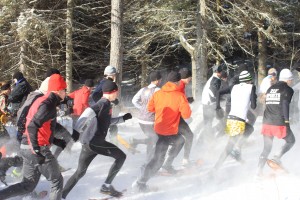 Since the 10-kilometer was a qualifier for the National Snowshoe Championships in Bend, Oregon (March 15–17, 2013), this brought out some worthy competition and some unbelievable times being run on the course.  Westboro’s Jeffrey Quednow, 21, smoked the competition, running a new course record of 44:07.  He has made big strides over the last few years, improving by a significant margin each year over his competition, making him nearly unbeatable these days in the snowshoe circuit.  He is currently running indoor track for University of Wisconsin – Eau Claire, and had an open weekend in his schedule that allowed him to do this snowshoe race.

Quednow himself can’t believe how well he is doing, “I’m surprised I ran so well today – I took the lead (over all 5K and 10K racers) just before the single-track section began (which was about two-thirds of a mile into the race).  I opened up a lead from there and second place was around thirty seconds back for a good portion of the race – I was able to extend it then during the last couple of miles before the finish.”  Despite doing a tough track workout the day before, Quednow was still sharp at Phillips.  He doesn’t expect to do more than one or two more races this season due to his indoor track schedule – that fast collegiate training will only continue to serve him well against his snowshoe competition. 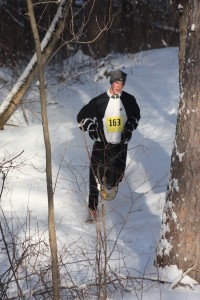 Understanding how dominant Quednow now is knowing by how much he beat a former National Snowshoe team member (placing top five in the nation), in the form of St. Paul’s Kelly Mortensen, 41.  Mortensen ran 45:16, a full 1:09 behind Quednow.  Last year Mortensen placed seventh overall at Nationals in Frisco, Colorado, so he is definitely some heavy competition to deal with – this happened to be Mortensen’s first snowshoe race this year and he feels it may not be likely that he will be able to make the trip to Nationals this year, unfortunately.

A little over three minutes behind Mortensen was Phillips local Jordan Neeck, 23, improving in his own right over the last couple of years to take third overall in the 10k.  Both Quednow and Neeck were several minutes faster than their times last year, on the same course.  Neeck’s time was an impressive 48:27, holding off fourth-place (Kronenwetter’s) Kris Borchardt who just broke the 50-minute barrier with a time of 49:54, making a final push to accomplish that goal.  Another three minutes behind Borchardt was Medford’s Jason Ruesch, 40, who rounded out the top five in 52:55.  The proud father of Jeffrey, Westboro’s Mike Quednow, 49, came in shortly behind Ruesch with a time of 53:19 (over nine minutes behind his son). 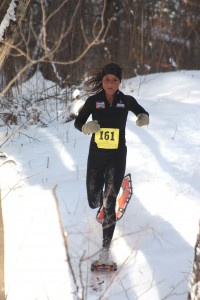 In the women’s 10-kilometer, Green Bay’s Jennifer Chaudoir, 38, topped all of her competition in winning with a time of 55:38 (ninth overall, including men).  But Phillips local Melissa Tekippe, 20, didn’t make it easy for her, as she tailed her throughout and only finished 34 seconds behind in 56:12 (second place for women, 11th overall).  They both were over five minutes ahead of the third-place women’s finisher (17th overall), but this was Phillips’ all-star and race director Kristi Speer, 32, enjoying her race course in 1:01:24, giving the courtesy of not crushing the competition at her own race.

Speer went into detail on the specifics of her event, “We had around 90 people pre-registered, and another 75 people register the morning of the race.  Our goal was to break 200 participants, but with the uncertain weather and snow conditions, many people made other arrangements for the day, or were home sick.  But overall, considering we only received snow about 48 hours before the race, we were very pleased with how quickly word spread that we did have snow, and how many people came out to race last-minute.”

“The unusual winter weather definitely made planning for the race more complex.  When all the snow melted two weeks before the race, we switched gears and decided to host the Flurry as a trail run.  Then we received a couple inches of snow a week before the race, which made us lean back towards returning it to a snowshoe race.  Thankfully, four to five inches of snow fell on the course Thursday before the race, which allowed us to make the final (obvious) decision of making snowshoes required to participate in the race (and very meaningful since the race was a USSSA Qualifier).  In the 10K, we had eight men and five women qualify for the USSSA National race, along with two juniors qualifying in the 5k race.”

The 10-kilometer course was primarily two loops of the 5-kilometer course, except for an alternate path for about a mile that was exclusive for just the 10K racers.  On the second loop for the 10K, instead of the course being chewed up and softer and therefore more difficult to run on, it was slightly more packed down and little easier for the second go-around.  On the single-track through the woods, where the snowfall was a little shallower, the leaves and sticks from underneath could be seen churned up on the second loop, but it was still very traversable.  The solo section for 10k racers only had some additional hills and was a little softer in footing but nothing too challenging, and the new scenery was a welcome addition to the race experience.  Overall, there was approximately 400 to 500 feet of ascent on the 10-kilometer course and less than half of that for the shorter event. 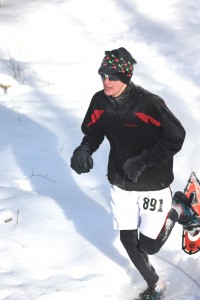 The men’s 5-kilometer race saw its own stellar performance from Marathon’s Andrew Studinski, 17, setting his own course record of 23:05 in the shorter race.  He beat his twin brother, Steven, by over two minutes as Steven placed second overall with a time of 25:27.  He had a close encounter with Stoddard’s Paul Schmitt, 15, though, as Stoddard battled him to the finish to end up just one second behind him in 25:28, in third place.  Phillips’ Kyle Lochner, 16, was among the cluster to also break 26 minutes, closing with a time of 25:47.  Medford’s Davey Sapinski, 38, was only another 9 seconds behind Lochner, as he was part of the aforementioned pack and finished fifth overall in 25:56.  Hometown favorite Kyle Schmidt, 38, mainly just skate-skiing this winter, did respectable on his first time on snowshoes this winter in taking sixth overall in 26:15.

Medford’s Michayla Heil, 20, used to the accolades of snowshoe racing, added another trophy to her collection as she was the female overall winner in 29:13 (ninth overall including men).  She had several competitors hot on her trail though, with Phillips’ Ellie Lochner, 15, only 12 seconds behind her in 29:25 (second for women, 10th overall) and Medford’s Michelle Brost, 43, just two seconds behind Lochner in 29:27 (third for women, 11th overall).  Phillips’ Lesley Reynolds, 36, was only another minute behind, in 30:21 (fourth for women, 16th overall).  No stranger to winning races is Phillips’ Bonnie Nutt, 17, who rounded out the top five for the women (18th overall) in the 5-kilometer race, completing the course in 30:44. 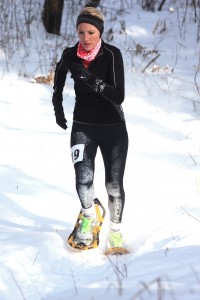 A number of participants joined up to do battle in the team division, with team names such as Pinnochio Mixed, Marquip Corporate, and Orange Angels Women partaking in the friendly competition.  Besides having an award for the team with the best overall time, an additional prize was given to the team with the most members on it.  There were 24 participants altogether that joined up on one of those three teams.

The awards ceremony was accompanied by a great door prizes’ affair that was coordinated through The Crazy Loon (a local outdoor sporting goods store in town).  Some of the larger prizes included Fischer cross-country skis (complete with bindings), Redfeather snowshoes, Keen bags, headlamps, free entries to other snowshoe races, free magazine subscriptions, hats, gloves and more.  Also, the winner in each age group received a pair of WigWam or Smartwool socks with their award item.

The four overall winners received the original Phillips Flurry trademark trophies, which were the snowflake “mascot” sculpted in metal wearing snowshoes attached to a crosscut of birch wood.  The top three racers in each age group also received these crosscuts of birch wood, in the form of being the faces of medals with the race logo being burned into the wood.  These were very original and unrivaled ideas for awards, and those that received these creative trophies and medals will always remember where they earned them. 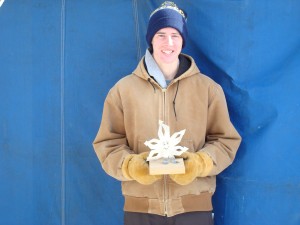 Additional information and results of this race is available at http://www.phillipsflurry.com.