What do race directors do when the demand for loaner snowshoes overwhelms supply and more are needed PDQ? Get ‘em, just what the ever popular snowshoer, Robert Bolton, did on the spur of the moment. 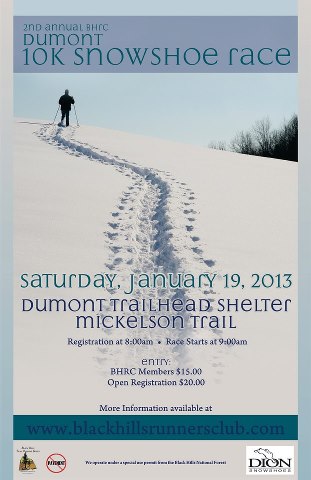 Generously, Dion Snowshoes lent the race a big supply, but as snowshoeing gains momentum in the Black Hills of South Dakota, the availability was way short. So to the rescue comes Dana Garry, Trails Manager for the Black Hills Trail Office for the state, with another boat load (or should it be sled full?) of snowshoes for the unshod.

This event in its sophomore edition continues growth with additional management (meaning work) provided by the Black Hills Runners Club and President, Emily Schulz-Wheeler . . . and a slight advantage their metropolitan neighbors in Minnesota don’t have: snow.

Bolton ordered up perfect conditions for the Black Hills: 30° F, “and we got bright sunshine and windy.” The layout for the 5 km and 10 km events are both out and back. (see short video of start below)

Race Start: Watch the Leader Take Off! Guess Who!

Racing away with the overall victory, Ryan Phillips crossed in a resounding 43:10. “Fun race,” he noted. “Thanks to Bob for introducing many of us to this great sport . . . I’m hooked.” Phillips is a definite powerhouse, a former cross-country star at Dakota State University before graduating in 1993. The 10 km distances are a kind of fun for him now as he is wrapped in the big ultra trail distances like the Black Hills 100 Mile where he directs the event.

The Black Hills 100, with its challenging climbs and summer temperatures, forces competitors to come to grips with the challenge . . . or drop. The race is recognized as one of the only five in the country to be included in the Gnarly Bandit Ultra Trail Series. His work is as a media product specialist for Technology & Innovations in Education, Rapid City. Early buzz is he may challenge at the USSSA Dion Snowshoe Nationals March 15-17, 2013, Bend, Ore.

The real race was behind him as Nathan More, Chisdim McDonald and Brennen Javorsky battled for the remaining two medal slots; at the flag, the order of finish remained like the above. T. J. Loftus nailed a sub-60 minute finish.

Then in the women’s race, Lisa Gustin won the class and sixth overall at just three ticks over one hour. Gustin is a tough competitor as a member of Team South Dakota mountain bikes. Along with Gary Haven (below), Andrew Busse and Eric Hansen, the quartet completed the Primal Quest Badlands tough endurance event in 2009. This event required 10 days and 600 miles of biking, running, hiking, spelunking, climbing, swimming and for good measure, a paddle race.

Krista Birkelo captured the silver and the tenth slot overall. A special shout-out for president Wheeler nailing the third medal for the class.

Also of special note, the oldest snowshoer, Haven in the 60-69 class, took seventh overall (“Hardest thing I’ve done in a while” he quipped) while eighth went to the youngest, Junior competitor Jared Loftus.

There were nearly equal numbers for both genders in this Dion Snowshoes USSSA Qualifier Race, a rarity in the sport.

Shane Steinhauer in the 20-29 bracket edged Dan Bjerkle (60-69), by little more than 30 seconds to win the 5 km gold while Tamie McMeekin won the her class and the bronze overall. She just stayed in front of Katie Lindum who finished a mere 15 seconds behind for silver.

Third place for the men’s class and the women’s class found Mike McMeekin and Tania Turpin capturing those honors.

The race for the medals took precedent, but the real awards were Peggy Bolton’s homemade cookies and muffins with hot cocoa to warm the body and recover simultaneously while savoring the race the on the historic Mickelson Trail.