The Taconic Mountains of New York, Connecticut, Massachusetts, and Vermont are rarely distinguished from the neighboring Litchfield Hills/Berkshire Hills/Green Mountains system to their east. A number of specialist articles exist regarding the complex geological history of the Taconics, but no popular thumbnail sketch appears to be available to snowshoers and hikers. This piece intends to serve as a start towards just that sort of resource.

No consensus appears to exist regarding the start and end points of the Taconics. Bear Mountain in Northwestern Connecticut, however, is a convenient if arbitrary place to start.

Bear Mountain in Litchfield County, Connecticut, constitutes the highest summit in the Nutmeg State at 2,323′. The hike to the summit is a popular one and introduces two recurring themes for outdoor ventures in the Taconics: the presence of the Appalachian Trail and of expansive views. 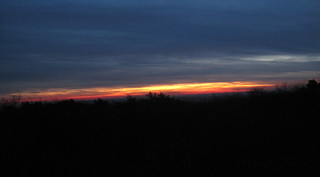 Last light from the tower base atop Bear Mountain.

The view from the summit of Bear Mountain is improved even more by scurrying up the pile of stones remaining from the base of a dilapidated tower located there.

By a quirk of political geography, the summit of Bear Mountain is Connecticut’s highest summit but not its highest point. That distinction belongs to a point at 2,379′ on the southern point of Mount Frissell, a mountain which finds its summit across the state line in Massachusetts.

Access the summit of Mount Frissell via the eponymous trail. Park to the east of Mount Washington Road/East Street just south of the state line at 42.04937, -73.46695.

Mount Everett in Berkshire County, Massachusetts, constitutes a prominent plateau with a summit height of 2,602′. 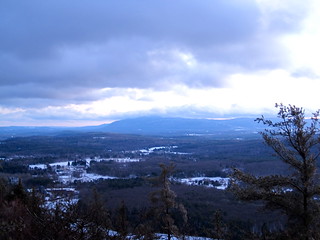 Mount Everett seen from Flag Rock a dozen miles away.

The windswept summit is the home of big views and small trees in the form of a krummholz ecosystem. One option for access to the summit is to turn off East Street, park at 42.10344, -73.45337, and do a relatively easy road walk, catching the Guilder Pond loop trail along the way. Two options present themselves for those traveling up or down Massachusetts Route 41, both of which connect to the AT on its way to the summit of Everett. One is to drive through the campus of Berkshire School and park at 42.11740, -73.41872 to travel the Elbow Trail. The other is to the south via the Race Brook Falls Trail; parking is at 42.08904, -73.41140. 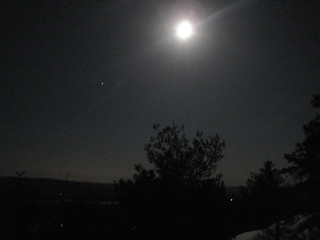 Alander Mountain finds its 2,231′ summit a quarter-mile or so east of the New York/Massachusetts border and provides a great look at the dissected plateau of the Catskills on clear days. Parking for the Alander Moutain Trail is available at the Mount Washington State Forest headquarters at 42.08621, -73.46223. Along the way you will have the option of hooking up with either the Ashley Hill or South Taconic trails heading south to Mount Frissell. The South Taconic Trail also heads north to the highest waterfall in Massachusetts, Bash Bish Falls.

Tucked away into the area where Connecticut, New York, and Massachusetts border one another, the ridges of the Southern Taconics put eight-to-twelve weeks of snowpack within daytripping range of millions of Americans. Be be aware that what the Southern Taconics lack in tall they make up for in steep, so don’t let their modest elevation fool you into thinking they necessarily make for an easy day out! Show up at the trailhead as well prepared as you would for a day in the Catskills or Shawangunks to make sure you leave happy.

Acme Mapper data annotated with parking locations referenced in the main body of the text above.