On the last weekend of October, for the past 15 years, winter camping enthusiasts have come together to celebrate the sport, learn new skills and techniques, and have a bit of fun at the Winter Camping Symposium.

Originally, known as the “Traditional Winter Camping Symposium”, the conference was the brainchild of Duane Lottig, the founder, designer and manufacturer of Snowtrekker Winter Tents. For a number of years it was held near Chippewa Falls, Wis., Ely, Minn., and after two years in Delano, west of Minneapolis, Minn., the event found a permanent home at Camp Miller 4-H Camp, near Sturgeon Lake, Minn., a small community about 40 miles south of Duluth.

Partial shot of the Tent Village, a favorite feature of each year’s Symposium.

Although not exclusively a “snowshoeing” event, snowshoes, particularly traditional, wood framed models, get more than their fair share of attention at the Symposium. Many years there is a polyurethane dipping tank to coat wood and babiche (rawhide) ‘shoes, and workshops on building your own snowshoes, as well as sessions about how to most effectively use them.

Although Duane has turned over the running of the symposium to younger enthusiasts, he and his wife Margo are still an important part of the activities, starting with the “tent village” that features as many as 50 Snowtrekkers and other winter camping abodes. Central to that is Duane’s display of the newest and improved models of the Snowtrekker line, and the “Tent Village Tour” is a popular part of each year’s conference. 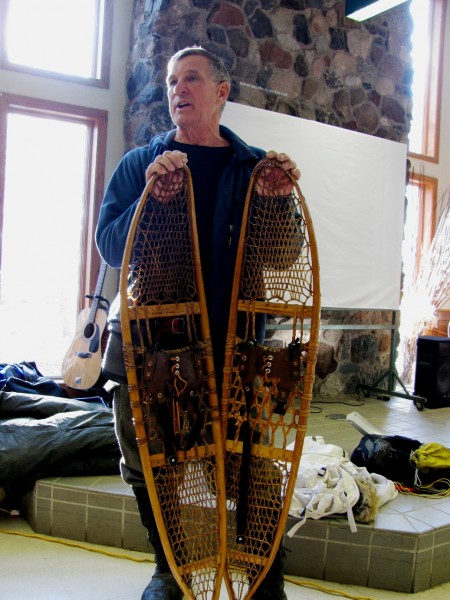 For those who are not familiar with the Snowtrekker, it is a “hot tent”; a canvas, self-supporting, modified “A-frame” tent with a small wood stove inside the shelter for heat. It can be 20 to 30 degrees (Fahrenheit) below zero outside of the tent, and as warm as 80 degrees inside. It is a style of camping that has gained increased popularity in recent years in the Midwest and Canada, in part due to the efforts of Snowtrekker Tents, their sister winter apparel maker, Empire Wool and Canvas Company, and also the books, “The Snow Walker’s Companion” and “The Winter Wilderness Companion” by Garrett and Alexandra Conover, licensed guides from northern Maine. In fact, the Conover’s books have probably served as the biggest inspiration for the growth of traditional winter camping, and they were featured speakers several times during the early years of the Symposium. Other featured speakers over the years have included polar explorers, winter ecologists, temperature and climate change experts, wilderness managers and rangers.

The event bills itself as “a celebration of all things winter”. Although you will find an occasional nylon, “cold tent” among the village of Snowtrekkers, the primary emphasis of the symposium is still geared towards the traditional style of winter travel in the northern US and Canada; backcountry touring skis, snowshoes, and sometimes dogsleds. Metal-framed snowshoes, if present, are usually serving as a back-up to wood frames.

There are often full-day workshops on building your own snowshoes, either with leather or nylon webbing. Many of the attendees and presenters come from Canada, including the moderators of the Winter Trekking website and forums (http://wintertrekking.com). Other workshops and seminars include topics such as knife use and making your own knife, selecting, packing and hauling your equipment and how to build a toboggan to do so, backcountry cooking, with a cook-off of the best recipes, traveling and working with northern Native peoples, wilderness first aid and survival, mushing and special places worth visiting in the winter. 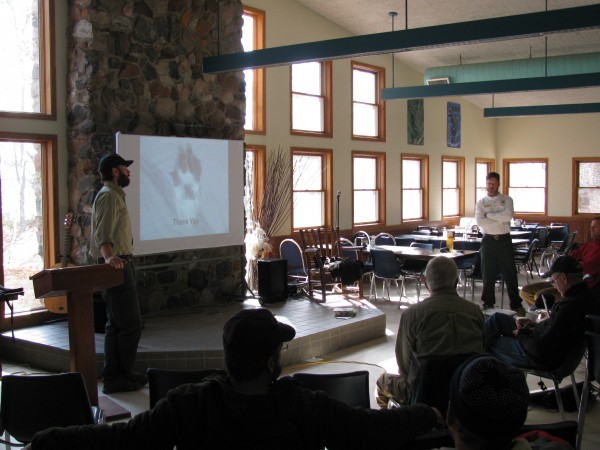 The evening presentations are dedicated to the featured speakers of that year. This year it was “Living with the Dog Rib Dene” with Kierran Moore, and “The Last Generation” (of traditional Native First Nation culture) by Kevin Slater. After the final Saturday speaker, it’s time to party! Bluegrass music, dancing, beer and camaraderie that lasts into the wee hours of the morning. (Or at least so I am told; I went back to my room about 11:00)

The Winter Camping Symposium has become a tradition among Midwestern and Canadian winter travelers. Planning for next year’s Symposium is already underway, scheduled for October 25-27, 2013, once again at Camp Miller YMCA Camp, outside Sturgeon Lake, Minn. You can find out more information as it becomes available on the event website, http://www.wintercampingsymposium.com and their Facebook page.

In addition, WCS attendees hold other events during the winter, which are directly related to the Symposium, such as Duane Lottig’s “Welcome to Winter” festival in Snowtrekker Tent’s hometown, Solon Springs, WI, on the first weekend of December, The Winter Camping Rendezvous, (http://www.wintercampingrendezvous.com)  near Birchwood, Wisconsin in February, and the Winter Family Fun Day at Lake Maria State Park near Monticello, Minn., on January 25th and 26th, 2013. (http://www.wintersnowtrails.org/)

Finally, I would be severely remiss if I did not include for you the very excellent recipe that won this year’s Winter Camping Symposium Annual Cook-Off. It was a hard choice, because there was some very great food to be tasted, but the winner was “REALLY Good Stew” prepared by Rhonda Reynolds. 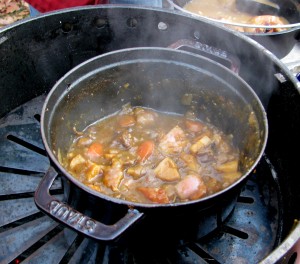 Brown meat (sprinkled with salt and pepper) on all sides in olive oil. Remove the meat from the dutch oven but leave the oil. Add the chopped onions and brown (add more oil if you need to); add the other vegetables and sprinkle with the spices except for the rosemary, and sauté for about five minutes. Add the browned meat back to the pan; add the apple juice, maple syrup and enough water to cover everything. Cook on low for about one hour or until the carrots and parsnips are almost done. Then add the chopped apples and rosemary and cook until done. Do add more water if it cooks down too much. If it is too watery, make a flour/water paste and add that at the end to the bubbling water to thicken.

We have also made dumplings and put those on top of the stew for about 10 minutes just at the end. Any cookbook will have a recipe for those or Bisquick also works. Be sure to adjust the seasonings as you go…the amounts are more like a suggestion.