Cou● lee (noun) 1. A deep ravine or gulch, usually dry (haha on that!) that has been formed by running water

In the Zumbro Bottoms area of south-east Minnesota, several trails have “Coulee” in their name, and rightly so. Journeys up and down countless coulees essentially define the running of the Zumbro Endurance Runs staged April 13-14. As a competitor, your choice of 50 miles or 100 miles is a choice between 14,000 ft or 28,000 ft elevation change. If that doesn’t convince you, then maybe the loose, very sandy, rocky terrain will? Or the midnight start for the 50 miler? Whatever your motivation, the race is not for the weak-minded. 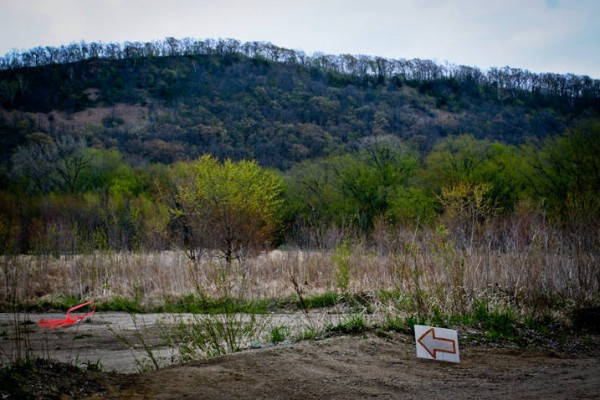 The Zumbro 100 endurance run is the first challenge in the 2012 Wilderness Athlete Gnarly Bandit Ultra Trail Series, offered by Upper Midwest Trail Runners. All athletes who complete all of the five races receive an equal portion of the $600 bounty put up by Wilderness Athlete Performance Products, as well as a coveted work of art by Rock Steady Racing’s own John Storkamp. Rock Steady Racing directs two of the races in the series, Zumbro 100 mile being one of them and the Sawtooth 100 mile being the other. 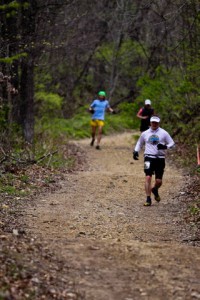 Days before the start of the Zumbro races, weather seemed to be the daunting subject at hand. Could it be that the race was starting on Friday the 13th or that it was just mid-April in Minnesota? All of us natives know that mid-April weather is questionable, but more likely to bring freezing rain than a sunny 70˚. The forecasters were all saying that it was going to rain the entire weekend. In truth, the weather bounced between strong gusty winds, pouring rain, and a sunny 70˚. The weather conditions proved only to be a small nuisance for the runners, compared to the course (a 16.7-mile loop – yes, that’s six loops to finish the 100 miles) and the body’s ability to withstand hours of self-punishment.

All ultrarunners know that there is a fine line between self-punishment and inner enlightenment. And we all also know that the enlightenment can come at a time of self-punishment; they are not necessarily independent from each other. Additionally, you cannot really understand an experience until you discover what is behind the smiling faces of finishers crossing the line. Below are some memorable moments from the 100-mile finishers who are still in the running to finish the series. Some memories are more enlightening and others are crossing the fine line into self-punishment. It’s a short run between pain and glory.

“At packet pick, John [race director] had hung up a Zumbro 100 banner, signed by people who finished the 100. There were signatures of many people that I very much admire. I wanted to have my name on that banner next to one of John Taylor’s or Daryl Saari’s many signatures. I kept thinking about that banner when I was bonking or hurting. Several times the thought pushed me to keep going. I just made it in time. I think I finished 1-2 minutes before cutoff. All I wanted to do was sign that banner.” Rick Bothwell

“I was sliding on a steep slope in the mud, catching myself with one hand before my butt hit. One hand is holding my body up in the mud, the other hand has my flashlight, and all I can think is ‘Oh great, now what do I do?’ and I start laughing. After some thought, I was able to swing around get up without the muddy butt.” John Taylor

“We had thunderstorms, hills of crazy rocks to climb up and down, gotta love Ant Hill, sandy beaches, sun, heat and breathtaking views; the joy of seeing my hubby and kiddos at the end. There are no words. I am humbled.” Arika Hage 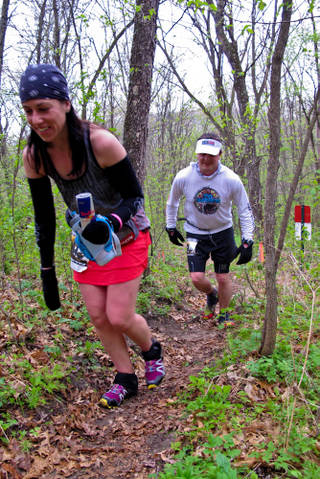 “The race directors really do things right, even when they have to invent trails where there were none before.” Brian Woods

“The people moments are the best! I like running with friends while joking, laughing, pushing, struggling, just hanging out; the great welcome you get every time you run into an aid station and the cheers as you leave. Oh . . . who can forget the sand? I think I dumped out a half-cup at aid station 3 on the first three loops.” Wayne Nelson

Oh, and you ask, who won the race? Oh yes, I’m getting to that; just have a little ultrarunning patience. But as for this gnarly adventure, the Wilderness Athlete Gnarly Bandit Ultra Trail Series, the Zumbro 100 mile seized a deep slice of the competitors. The Gnarly Bandit himself captured 14 athletes, some of which didn’t even start the race. Maybe they heard the word “coulee” one too many times? 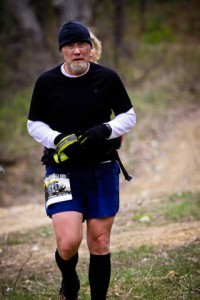 Daryl Saari ahead of Women’s winner Susan Donnelly on some of the best footing on the course: grass! 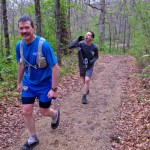 The Gnarly Bandit tacked a message on a stump near the finish banner. He scribbled, “See y’all at the next dastardly challenge, the Kettle Moraine 100 mile/100 km, at the beginning of June in Wisconsin.” Wonder what gnarly surprises await there . . . .

Remaining events not mentioned above: The Black Hills 100 and the series finale Wild Duluth 100Km

Photography provided by Molly Cochran and processed by Bryan Cochran of Bryan Cochran Photography, a widely known and respected outdoors and race photographer in the Midwest. Bryan’s work is published in Snowshoe Magazine, UltraRunning Magazine, and other magazines and newspapers.