Chalk another win up for Toronto’s Trevor Thom.

For the second time in two weeks, the veteran racer let his feet do the talking for him at a snowshoe race in Ontario’s Blue Mountains.

This time Thom took the top spot at the 5K portion of Switchback Challenge sponsored by the Craigleith Ski Club just outside of Collingwood, Ontario. 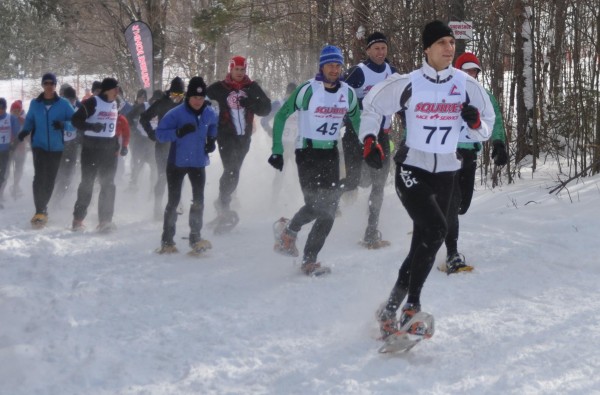 In fact, the race was almost a photo finish of the 5K Yeti race the week before where Thom won the with fellow Torontonian Christy Barber hot on his heels.

Thom said he’s a veteran race runner who participates in marathons and half-marathons frequently during the year.

In the punishing 10K race, Collingwood’s Luka Senk – a well-known Iron Man and Triathlete competitor – took the top spot in 57:02.9.

To the casual observer, the Switchback Challenge is not be for the faint of heart — or breath. It’s the seventh year for the race.

“Of note, the races (5k and 10K) include a climb up the Niagara escarpment comprising 1.1Km in length and an average 10 per cent grade,” said Caswell. “Conditions were cold but sunny, with fresh snow of ½ foot (several feet with drifting in certain areas). It made for a tougher day than past years and resultant times were slower as a result.”

Former organizer and race founder Hugh Fallon said in an earlier interview that “Jutta Witt — my partner in crime — and I questioned Craigleith about some changes that were made to an established snowshoeing area at the north end of our club where the well known Switchback Trail is located,” explained Fallon. “We asked who was in charge of snowshoeing at the club, and they said ‘I guess you are.” 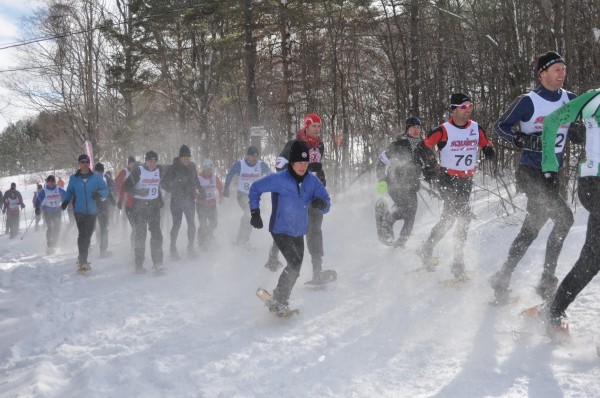 “I can’t take credit for the race idea, that was all Jutta,” he said. “She originally thought we should have a marathon, but after realizing that was way too long, we settled on the 5K-10K format, which is consistent with a lot of other snowshoe events in Canada and the USA.

“We realized that to have a race we would have to measure the trails, so without a reliable GPS, we took out a wheel and walked all the trails from the south end of Craigleith, all the way over to the top of Georgian Peaks, recording distances as we went. From there, we combined different sections of trail and formed the 5K and 10K courses.”

““The 10K course is a bear, but gets high marks from the experienced runners in the group as a real challenge,” he said.