An overnight five-inch snow fall coated the grounds, trees and trails in the Winona State Forest creating picturesque wintry conditions awarding the snowshoers ready to attack this challenging layout. Race Director, Matt Westerlund, could not have been happier as warm temperatures and rain had created some havoc in the park, but new snow cover covers all ills. Westerlund wrote this report on the championship day: 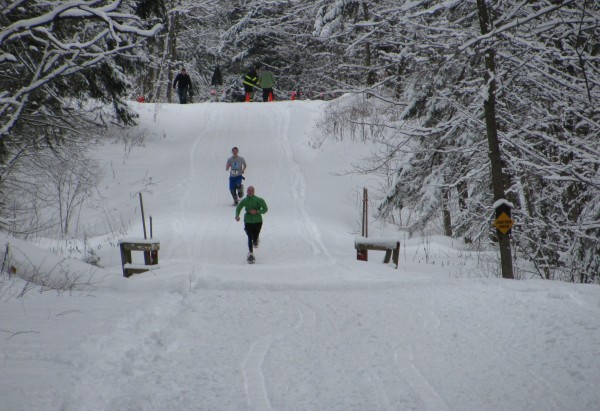 On Sunday, February 19, snowshoe racers from across the Empire State came together for a race some would consider one of the most adventurous courses ever seen.

Mother Nature certainly helped out as well. With five inches of new snow that fell the day before, mostly sunny skies, and temperatures around 30, you couldn’t have asked for anything better. We had about a 6 inch base in the forest prior to the new snowfall, but new powder made the course that much better.

Earl Steinbrecher won the 10km course race, which was nearly 11 km, about 30 seconds in front of his good friend Eric Sambolec.  Steinbrecher admits “I wasn’t even planning on going.  I hadn’t been on snowshoes all year. I didn’t think there was going to be enough snow.  I had no expectations whatsoever. The course was like a hard trail race…very challenging…all that uneven terrain. I just felt good today.”  Steinbrecher says. Local snowshoe racer Kenny Burd rounded out the top three only a minute behind the first place finisher. 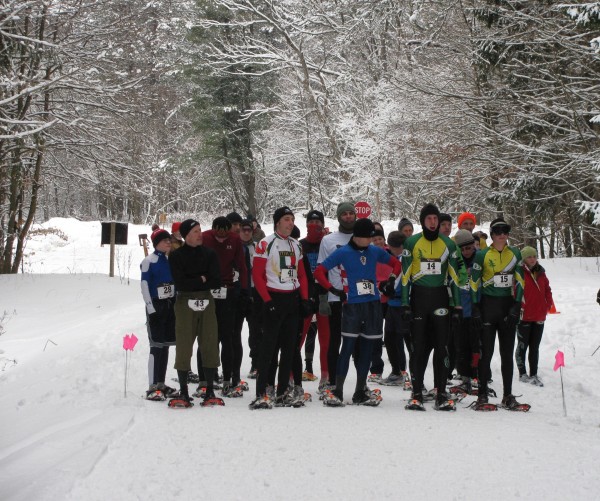 Empire State Championship 10km Racers just prior to the start

In the 5km course, Ben Harper continued his winning ways and became Empire State Snowshoe Champion for the 2nd year in a row. According to Harper, “the course was awesome and conditions were just perfect for a snowshoe race.  The course had a great variety of terrain, with steep inclines, and of course declines, some obstacles such as downed trees and stream crossing that had to be jumped over, single track winding through the woods and more open trails.  It was just the right mix of obstacles, not too technical but yet challenging.

Westerlund concedes – this type of race course isn’t for everyone. “I design a course based on what I believe the sport of snowshoe racing should be”.   Third place winner Burd, feels a similar way.  “Today’s race is what snowshoeing is all about! The course was long, wet, cold, hilly, while also meandering through the most beautiful wooded areas in the East.  Local athlete, and Cross Country coach from the local high school, Jim Pelton brought out some of his cross-country athletes to the race.  “The course was as challenging as I would have wanted”, says Pelton.  “I like the idea of mostly single track and then finishing on a little wider trail. I had a good time even though my lungs felt like they couldn’t provide me with enough air and my legs were on fire and felt as though they could be burning the trail down to dirt.  Pelton’s top runner for the Sandy Creek Cross Country Team Cody Donahue  placed 2nd in the 5km, coming in only a few seconds behind Harper. Harper says “I felt him behind me most of the way”.  At the finish, Donahue laid himself out in the snow, smiled, and said “That hill was really hard”. 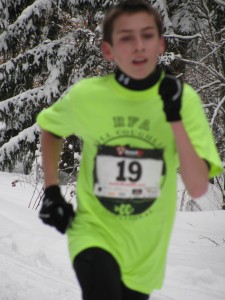 Ryan DeLola, 13, has a big future in snowshoe racing along with 10 other teens (including Connor Kerr, 9!)

Jim Tucker, president of the Empire State Snowshoe Racing Association, and coach of Paul Smith’s college snowshoe team, agrees that the event went off really well.  ESSRA sponsored the race, and brought an abundance of trophies and medals for winners.  These championship events couldn’t go off as successfully without ESSRA’s support. I am grateful we have this organization supporting the sport here in New York.

The layout is designed with the 5 km distance providing a good-but-not-overbearing challenge, and then the 10 km beast utilizing the most difficult of trails his devious mind can find. “The 10km distance was carefully designed to be the most difficult I could possibly create in this forest. There will be new single-track trails, climbs and crawls along with regular single track and groomed trails otherwise.” In other words, a healthy mix to keep a competitor entertained . . . or as Westerlund exhorts, “Embrace the challenge!”

Unreported were how many of the possible obstacles the race warns of were encountered: logs, boulders, open water, downed trees, snowmobilers, skiers, and wild animals. 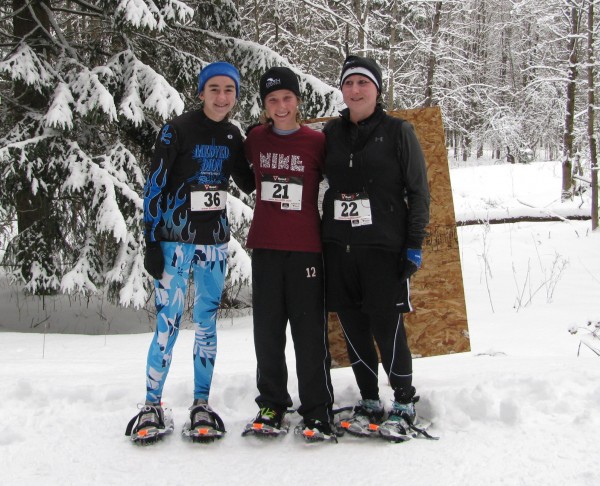 Winona Forest is one of the snowiest places east of the Rockies with an average snow fall of 200-plus inches per year. In winter, the prevailing westerly winds move cold winter air over the warm water of Lake Ontario producing massive lake effect snow fall on the Winona Forest in the Tug Hill area.Winona Forest, located on the Southern boundary of  northern Oswego country in Northern New York, is a 9,233-acre state forest that offers many recreational opportunities.”

The first 70 participants received a commemorative Championship Mug. Plan to use them in the after party where delicious food for participants is complimentary along with. grilled hot dogs, and a crock of a special creation.

This is an old-school race, a refreshing throw back to older days, so physical awards for finishing don’t exist. What does exist is Westerlund’s comment that, “You are all winners at this race.”