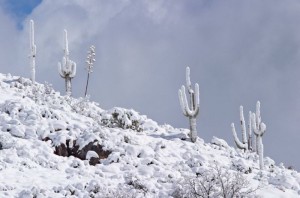 Though not in Flagstaff, a snow covered Saguaro is wintry beauty

It all started back in a not-unsimilar year when the snow was sparse. Yet Coach Steve Ilg, called “a multisport mutant . . . America’s outdoor athlete” by Outside Magazine, gutted out a finish sporting snowshoes. The race’s future was forever enshrined in the annals of feats unknown, a candidate for the Ripley’s Believe It or Not! Museum.

The lively 10 km field dashed off the line chasing Jared Scott’s University of Colorado cross-country experience to a 1:04 win on these challenging trails featuring sustained climbing and technical downhill terrain. Scott, a member of the 2004 NCAA National Team Championship, is an avid trail runner. He has placed in the USATF Mountain Trail Championships and won the 2008 Salomon Flagstaff Mountain Trophy Series Champion. 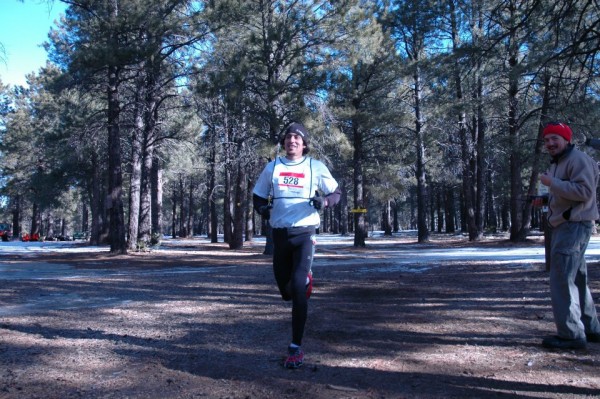 In fact enjoying these mountains is so prevalent here that the city has its own Flagstaff Running Team featuring similarly gifted athletes. That Scott loves trails and mountains corroborates his MS degree in forestry at Northern Arizona University.

Stone, a mother of two and 2008 Olympic Marathon Trials qualifier, remains an active trail racer. She completed the 2012 Xterra White Tanks 20 K Trail Run with a second overall in the women’s class and won the women’s October, 2011 Xterra Estrella Mountain 20 Km Trail Run in Goodyear, finishing in the top 10 overall. 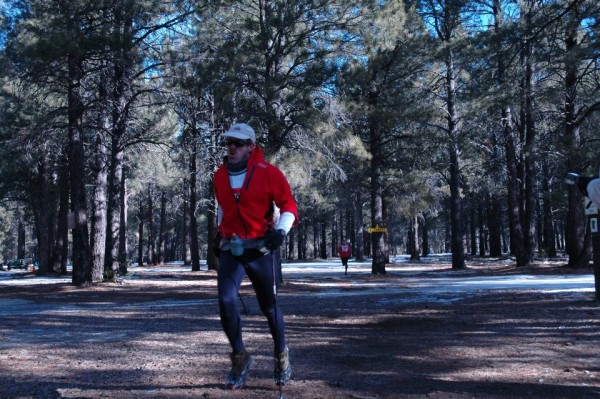 Thurston scorched the Flagstaff 50 Km in 3:38 silver run in 2010 and claimed his Boston finish in 2011. That he is a trail runner is confirmed with a running of the Gaspin’ in the Aspen 15 Km.

The margin at the Snow-or-No finish was a slim six-seconds as Thurston held off Stone to the banner.

The companion 5 km race on rolling terrain and trails found Aaron Ells breaking 30 minutes by a hefty 3.5 minutes. 54-year-old Matt Ryan finished with the silver, just missing the 30-minute break by 11 ticks. Stephanie Kunze edged Katie Proctor for the women’s gold at the clock by one second. 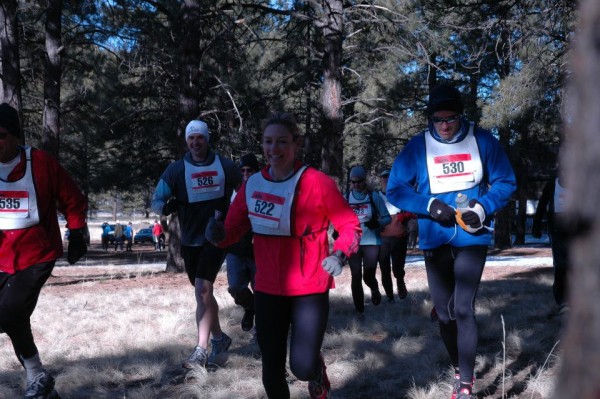 Kahtoola’s Micro-spikes were the word of the day as their RNR22 Lightweight Running Snowshoes found themselves relegated to the sideline since there was little snow and . . . and Coach Ilg wasn’t there to tackle the trail in snowshoes, snow-or-no.

Photos posted on Facebook courtesy of Friends of Flagstaff

Write phillip@ultrasuperior.com and reference this article in the title.