Hot snowshoe racing is already a hallmark at the Phillips Flurry Phillips, Wisconsin, in only its second year. Jake Rhyner zipped the snow-packed course in a dominating 44:36, nearly three minutes quicker than Brent Kann’s inaugural race victory in 2011. “Conditions were perfect for snowshoe racing,” noted Race Director (and racer, too) Kristi Speer: 20 degrees, 3″ of fresh snow topping a groomed course, clear skies and no wind. 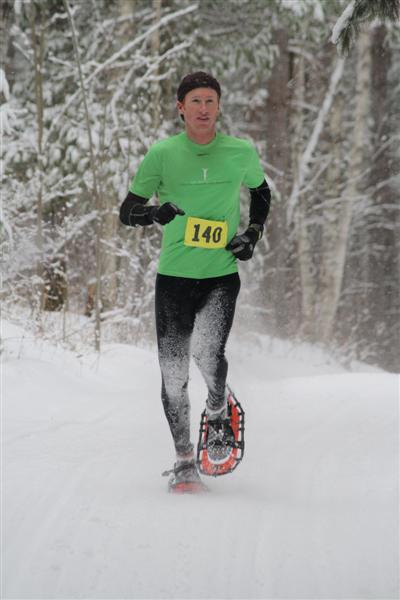 Phillips is a 90-minute drive in a southeasterly direction from Lakewoods Lodge, Cable, the site of the 2011 USSSA National Championships.

Sheboygan’s Rhyner earlier in the season busted Perkie’s chops at the nearby—relatively—Perkinstown Snowshoe Race resetting their 5 km record and now adds the longer Flurry to his résumé.

In 2011 he won highly competitive the Clermont Draft Legal Challenge Triathlon, Fl, by smartly challenging for each segment of the 750m swim, 20 km bike and 5 km run, though winning none. His combined times edged gold by just five ticks on the clock. In a TeamUSA.org report, Rhyner showed his leadership abilities: “If we didn’t work so well together (on the bike), there’s no way I would have won. I kept telling them, ‘if we work together, we can reel them in, so keep at it.’ Everyone was taking their turn pulling, and it worked out well.”

The Wisconsin-LaCrosse runner won the 2011 Green Bay Triathlon Sprint Course, and won the run at the 2011 Life Time Chicago Tri, finishing sixth overall just 90 seconds behind the overall winner. Perfect training for a snowshoe racer! Rhyner handles pressure well, it seems, making him a perfect professional health coach. He told me, “Phillips Flurry was a great course with good combo of packed and singletrack.”

Popular snowshoer, Jeff Quednow, always a threat at the front captured the silver in 47:46 almost identical to his second-place time in 2011. Quednow raced the 6-mile event at Perkinstown (won by USSSA multi-year champion Greg Hexum), finishing on the podium.

Hometown favorite, Jordan Neeck, slid in four minutes later at the Flurry for the bronze overall.

One of the dominate women racers of many in the area, Kristi Speer, won her home course just 38 seconds over one-hour followed moments later by Medford’s Michell Brost as first women’s master. The duo finished one-two at Perkinstown as Brost pressured Speer to the finish, losing by 19 ticks. 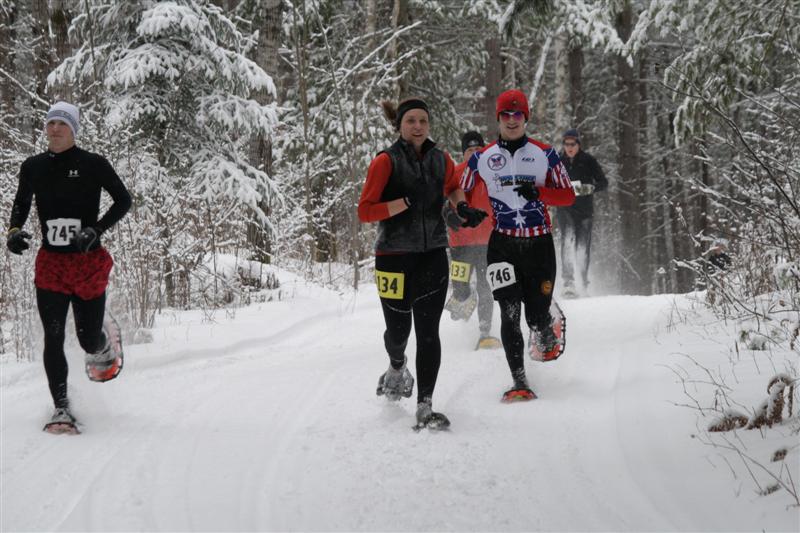 Speer is active racing regional snowshoe racers along with the Syracuse and Cable USSSA National Championships. She also cross-trains with tri-races.

Special note in the 10 km finishes for D. Meck for winning the 70 class and the oldest competitor in this distance.

The 5 km event is hugely popular here as 138 of the 157 racers chose this distance only to see the speedsters obliterate Kris Borchardt’s inaugural year course record of 26:06. The 16-year-old Andrew Studinski of Marathon City (near Wausau) flew through the snow like a plow on a Range Rover, nailing a 24:19. A high school cross-country racer, Studinski along with brother Steve, below, have competed as runners for years. 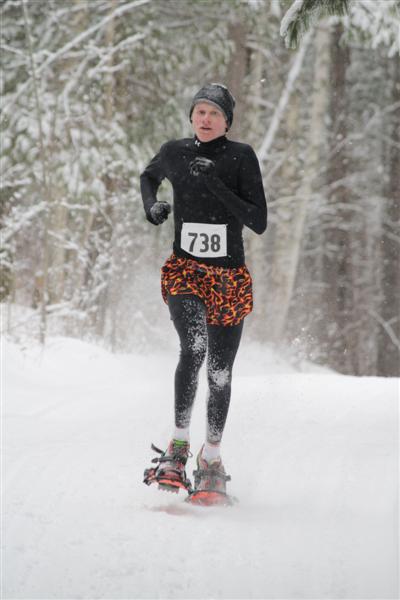 Phillips’ Kyle Schmidt won the 30+ class and overall silver with his 25:31 while Borchardt beat his own record in 25:54 (“I fell apart the second mile and lost a lot of ground on the uphills.”)
Within the next 59 seconds Mike Quednow, Larry Buerger, and Steve Studinski tripped the timer. 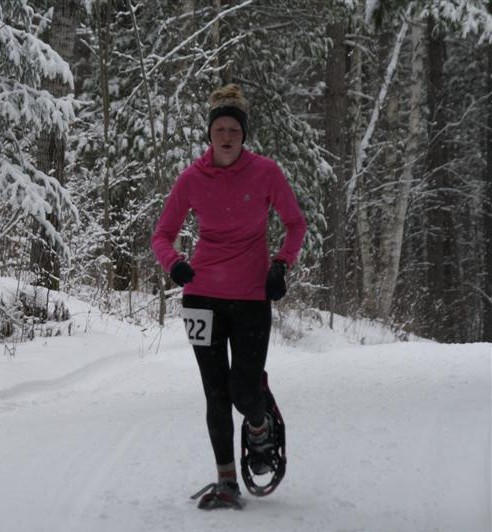 Tekippe took third in a highly contested women’s race at 2012 Perkinstown in 29:14. At the 2011 USSSA Nationals, she battled for a sixth overall in the Junior class.

Special note to the always-cheerful USSSA medalist, Roddie Larsen, 74, in her under-one-hour finish. Linda McReynolds nailed a finish in the 70+ group, too at 1:11. Dick Kloepfer, 75, medaled a strong 47:26 at the banner.

On the other end of the spectrum, future USSSA champions such as six-year-old Allison Crabtree, Kennan, gave a gold performance in 1:23 while Mathias Hoogland, Catawba, showed strong skills in his 1:19 work.

Winter in Phillips creates some of the top snowshoe qualifying in the country . . . and chili covered with plenty of toppings, like cheese. Borchardt noted in the after-race, “We were in a heated tent that had some good chili and hot chocolate.”

“The Phillips Flurry (USSSA) qualifying snowshoe race was glorious, a winter wonderland with fresh snow.” Speer’s assessment is particularly poignant in this challenging winter-weather season, causing snowshoers to reflect on how lucky the sport is to be able to take advantage—and perform—on the beauty of those little crystals that drift down from the heavens.
Write phillip@ultrasuperior.com