The snow turned pink Saturday as an avalanche of snowshoers turned out the Tubbs Romp to Stomp event in Ontario.

Held at the Scenic Caves Nature Adventure resort, more than 400 garishly-garbed people toting snowshoes came out to play in the snow at the fifth annual Tubbs Romp to Stomp. They were all there with a common mission in mind; to raise money to find a cure for breast cancer.

The event is sponsored by the Tubbs Snowshoe company, and has pulled in many hundreds of thousands of dollars so far across North America. Until this year, the Ontario event was the only one in Canada. It’s been joined by a new Stomp in British Columbia now. 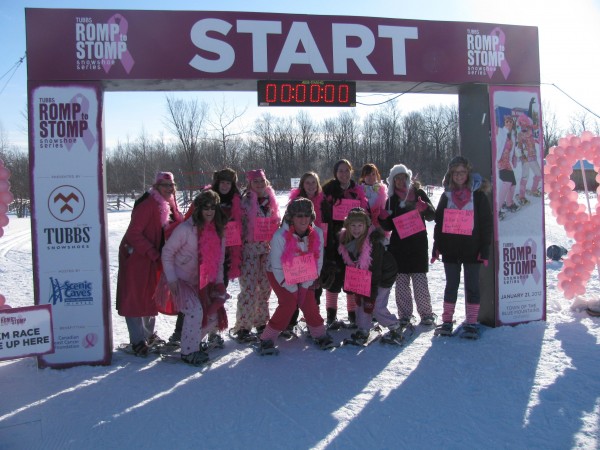 Tubbs Snowshoes, one of the largest snowshoe manufacturers, began the event in the United States several years ago. Snowshoeing has been perhaps the fast-growing winter sport for the last decade or so, following the development and popularization of high-tech models.

David Blasak, a sales and marketing manager for Tubbs, said the Stomps started about five years ago as an “Avenue to help promote the health benefits of snowshoeing.”

“We figured that breast cancer would be a great cause,” he said, “so we created this great snowshoe series, which is now in nine locations across North America, making it the largest snowshoe series in the world.” 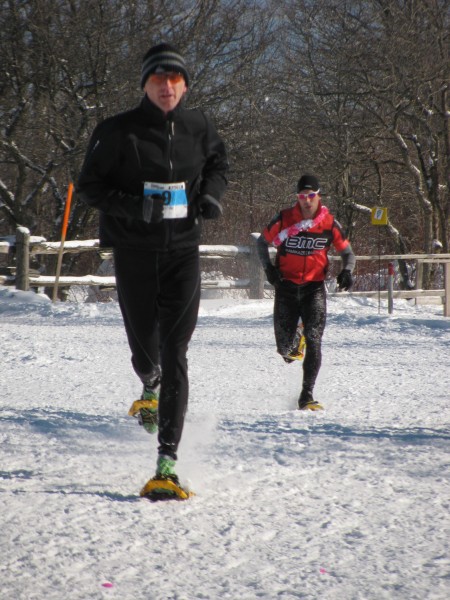 “It’s been growing year after year and so far we’ve raised $1.8 million for the charities and it keeps getting bigger.”

Blasak said that “once people have been exposed to snowshoeing and realize they don’t have to stay indoors for four or five months of the year and that they can stay active, they love it.”

“And we’ve come a long ways from the old beavertails!”

The company is flooded by questions during the Romp to Stomp events, said Blasak, but he stressed it’s still “all about the breast cancer cause.”

Fran Quinn from Waterloo attended the event for the first time with her team “The Healthy Hooters.” She’s a breast cancer survivor eager to jump at the chance to give something back.

“We’re pinked out!” she exclaimed, gesturing to the outlandish sea of pink surrounding her.

It’s been three years now that I’ve survived,” she said. “One of my girlfriends saw an ad for the event in a magazine and organized it. It’s just a different sort of fundraiser that we liked.” 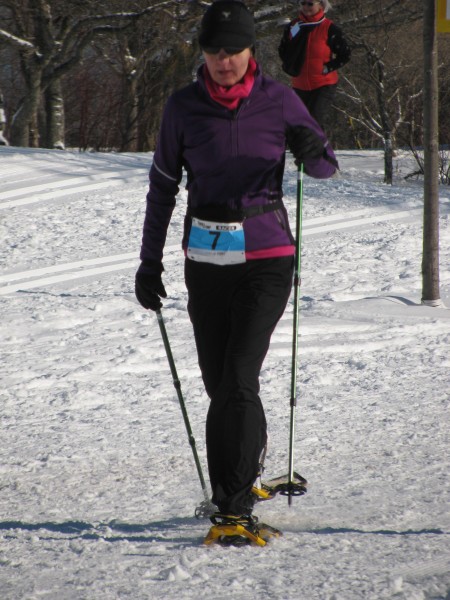 “It’s overwhelming,” she added, waving at the avalanche of fundraisers at the Scenic Caves grounds. It’s nice to know the support’s there and the caring is there. It means a lot.”

This was the first time any of her 11-member crew had been on snowshoes, although they were adapting fast.

“If you can walk you can snowshoe,” said Jen Nichol, the volunteer coordinator for the event.

“It’s a fantastic event the benefits the Canadian Breast Cancer Foundation. Everybody is affected by breast cancer,” she said. “It’s a really fun event for a great cause. And it’s a winter activity, taking it outside of the normal things we see for fundraisers.”

The shoes have made it possible for competitive runners to find a winter outlet. The Stomp featured a five-kilometre race, won in a time of just 16:40. Such races mark a return to the roots of the sport.

From the late 1800s to approximately the 1930s or so, long-forgotten snowshoers formed clubs with distinctive uniforms and challenged each other to races. Snowshoeing burns 45 per cent more calories than walking or running at the same speed.