How could one overlook racing this joint state championship and national qualifier in northwestern Hancock County? Only 10 clams—along with lobsters, Maine’s most prevalent seafood—for their registration, reflecting the values of the prudent residents of the country’s most eastern state. One had to be just plain unlucky not to earn one of their generous age-group medals set in every five-year blocks. 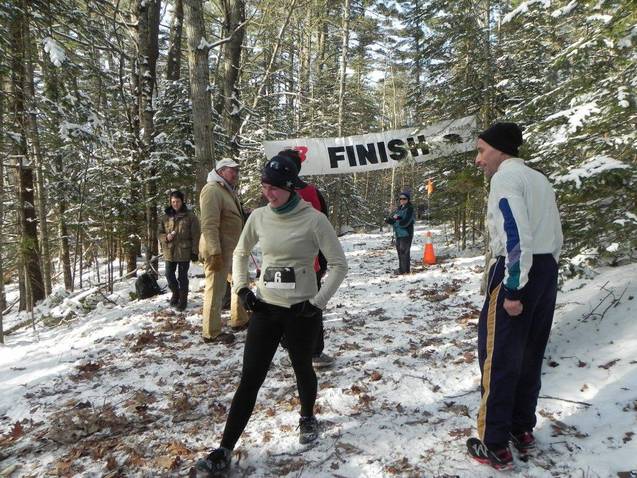 Some just didn’t make it to the race; maybe it was the well-advised warning in the application: “This run is only for the type of person who knows what to expect and prepares for an off-road event year-round. This is a winter event and subject to extreme cold.”

If that did not get your attention, try this: “You can expect the chance encounter of wildlife including moose. Footing is rough at best for much of this run, and there are hills to climb and small stream crossings to maneuver around. Also, there may be the possibility of icy or slippery conditions present on the course. Distance may be modified based on conditions the day of the event.” That is what results when heavy glacial activity carves land like a hammer in butter. 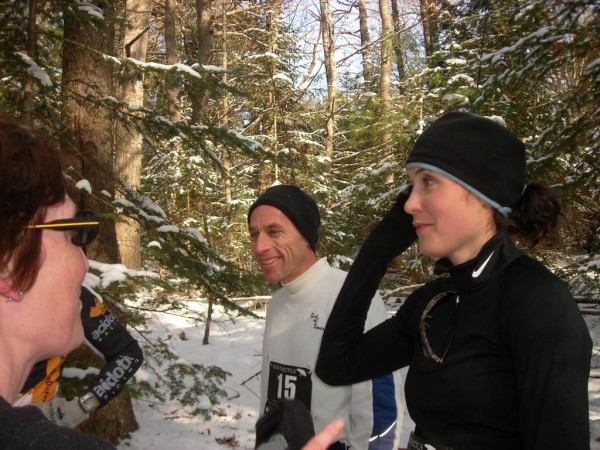 Katie Johnson wonders to Race Director, Peter Keeney, “When are you getting more snow?”

And they were serious. Race Director, Peter J. Keeney reported, “Temperatures ranged from -4 at the noon start to 16 degrees around 2:00 p.m. Our course was covered in snow but (just) not deep enough to safeguard from roots and rocks, so we decided on a foot race with spikes and crampons.” 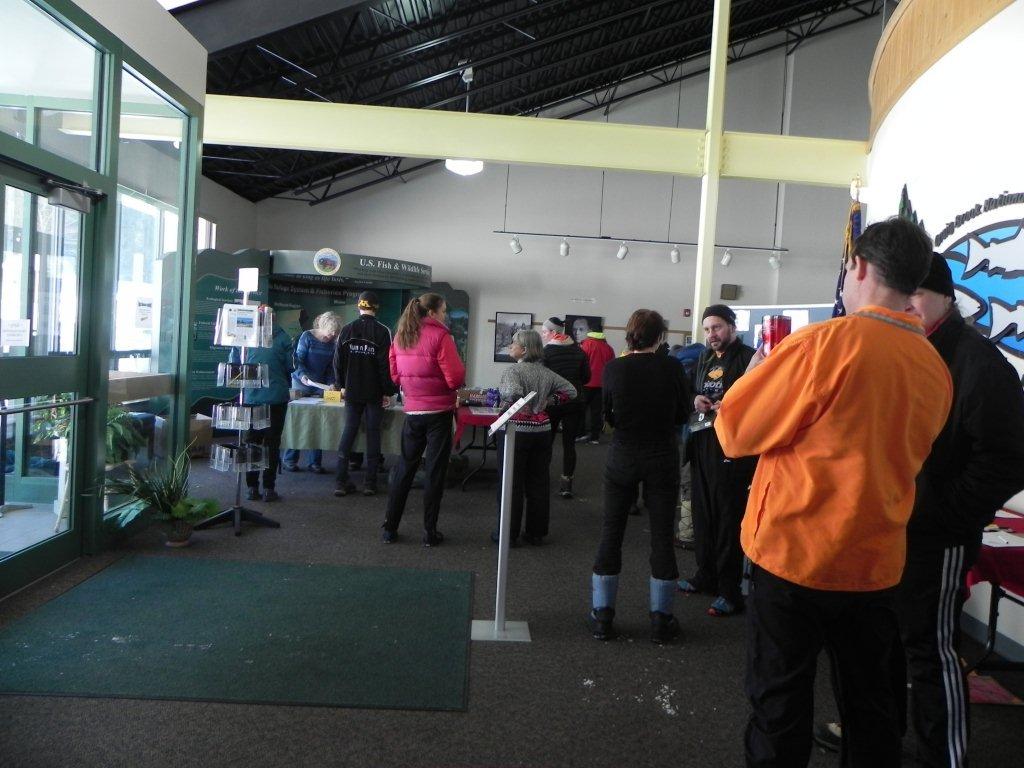 Gorgeous contempary registration in the wilds

Those who did show enjoyed the ruggedly scenic 4.9-mile course. “It was amazing to see the age range in our finishers,” noted Keeney. Overall winner, Jeff Lombardo, youngest competitor of the day excepting his wife Lindsay finishing tenth, crossed the line in 35:08, a seven-minute-mile pace over the challenging terrain. Peter Keeney took the silver about 73 seconds later.

Jeremiah Graham captured the bronze with a 39:45, with Steve Sprague missing these designations but still leaving happy with his age group medal. 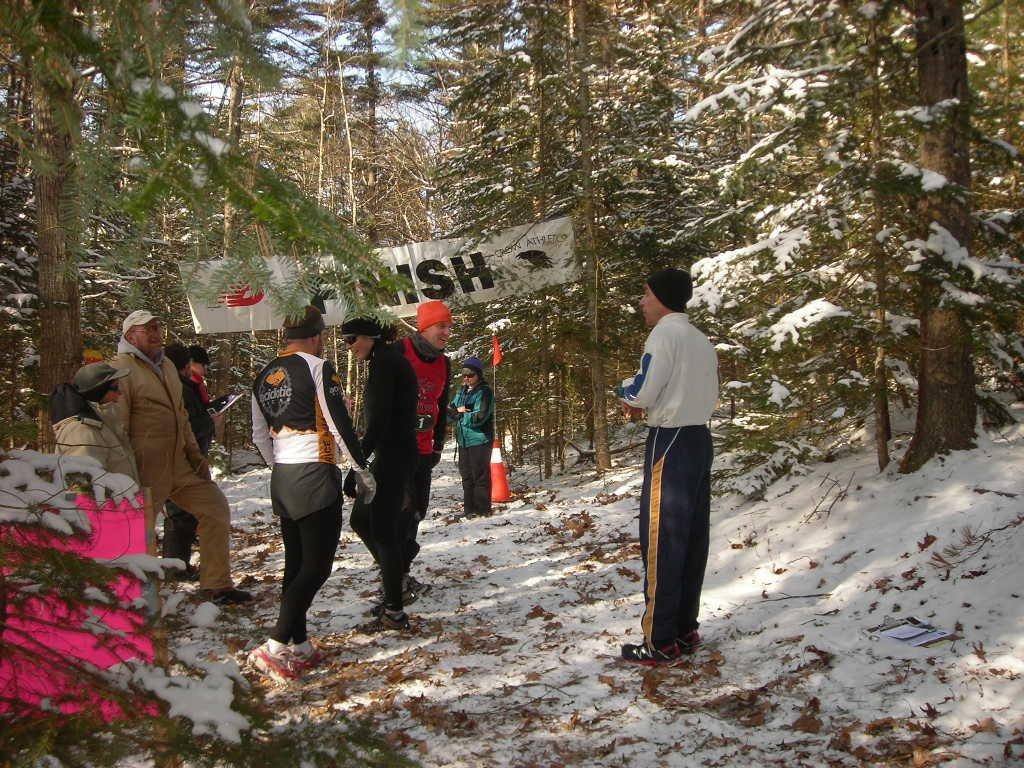 Desiree Sirois followed Sprague by a few seconds to win the women’s overall gold and fifth with Katie Johnson pressing Ryan King right up to the finish as he nailed sixth and three-seconds later she took the women’s silver. Theresa Withee followed in less than 100 seconds for the bronze. Tom Kirby, 55, ninth, finished out the top 10.

Each of these top-ten racers won their age group except King whose age group (and exact age for that matter) matched Sprague’s.

Keeney called Ed Raymaker, the race’s 80-year-old finisher, “The Gordie Howe of Snowshoe racing, being at every race we have held over the years dating back to the 1990’s.” 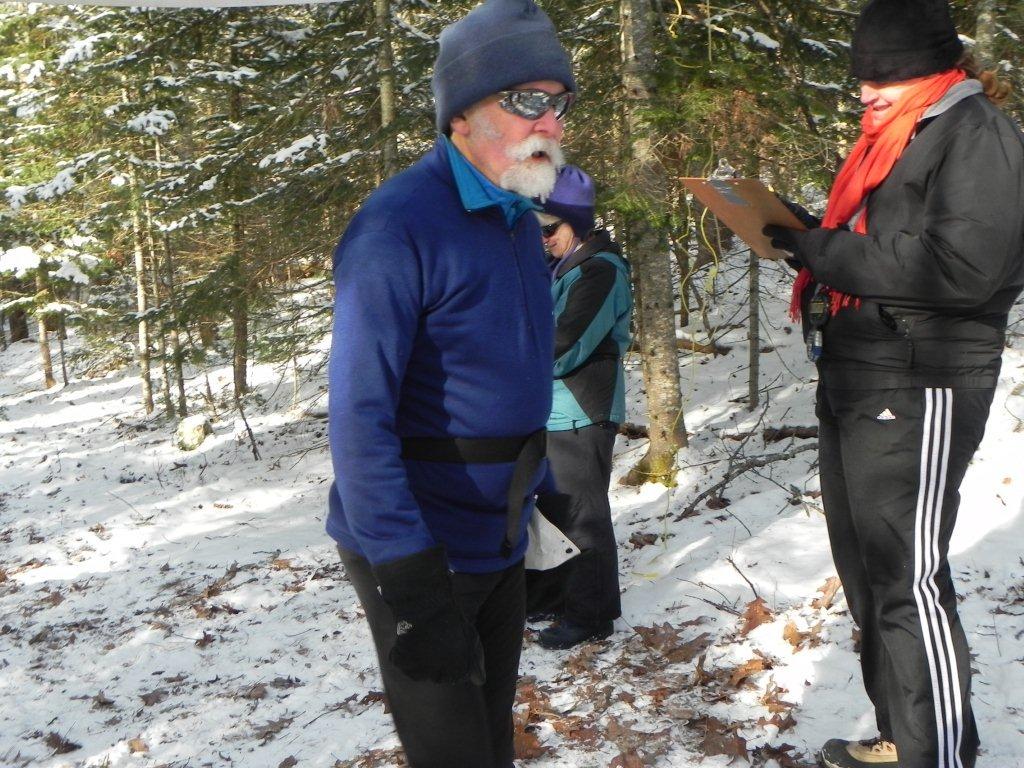 Ed Raymaker looking fresh, ready for yet another race

There is more snowshoe racing to come in Maine! “We are hoping for weather to change and supply us with the right amount of snow for our other events planned  later on in Winter.”

For more Info on the Great Pond Trust:
http://greatpondtrust.org/partners/state-of-maine-championship-snowshoe-race/