The Dion Snowshoes USSSA National Championship Qualifying Races made their first ever foray into North Carolina, perhaps holding the state’s first ever snowshoe race here, period. Held at the highest altitude city along the Eastern seaboard, Beech Mountain at over 5,000 feet, hopes were high for a white January. But in a season where traditional snow races are run on soil like the Jingle-Bell in the Adirondacks or cancelled like Boulder Ridge–not that far from the nation’s official refrigerator designation, International Falls, Minn–it is not surprising that the moisture that fell here on race day came, disappointingly, in the form of unfrozen snow, better known as rain. 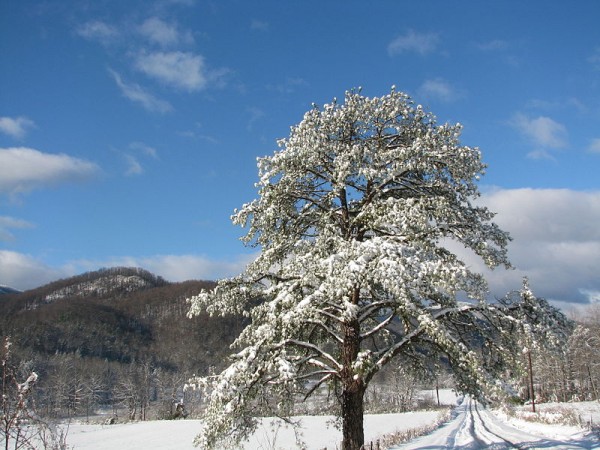 Plenty of mountain snow in North Carolina; just not this day

The enthusiasm, however, belied the weather in the planning and execution of this inaugural event. Mark Elmore Sports Director of the USSSA told me, “The folks were great there, and I’m really excited about the sport returning to North Carolina next season. They are very interested and a great group to work with.”

A hearty 14 racers braved big winds, 40 degree temperatures, and drizzle-rain to battle and march away with the North Carolina State Snowshoe Champion designations. In a cruel trick by Mother Nature, a week earlier there could have been a course with snow.

Here are two names to remember: Jane Schwarting of Fort Bragg and Jonathan Czarnecki of Charlotte. These are the first two USSSA members from the state who qualified for the National Championships. South Carolina had theirs a few years ago, a snowshoer who flew to Minneapolis and competed at the Snowshoe Shuffle Qualifier. The new plan for 2012-2013 will have to be filling out the remaining 50 states who have yet to break the ice, if there was any, by qualifying for the national championships. 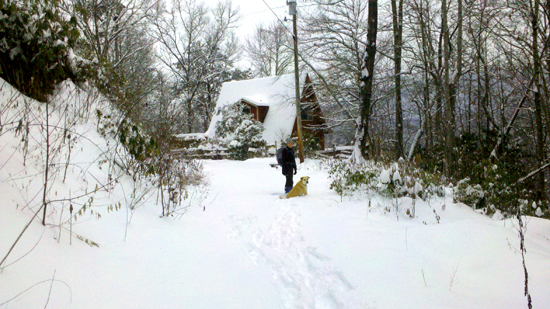 For that matter, there’s still plenty of time this season. The southern-most state, Texas (okay, Florida might be more so) has their multi-year USSSA National Team member, Laurie Lambert, to showcase the sport; snowshoers should be reaching out to those states not yet having a qualified snowshoe racer to do so, and close the gap. I’ll get the list for you.

The Town of Beech Mountain Parks and Recreation developed a strong sponsor support-base in their first year with Atlas, Easton, Crescent Moon and Dion Snowshoes all joining forces to expand the sport to this mecca of business (for example, rated in top five by Chief Executive Magazine). 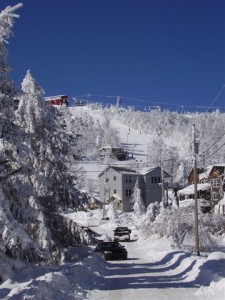 Hammer products were there along with Lees McRae College, boasting their campus’ altitude (“Highest East of the Mississippi”) along with their tag line, “an outdoor enthusiast’s dream.” With 22 majors and 16 minor degree choices, this liberal arts institution is continuing the state’s large educational outreach that started with the country’s first public institution back in 1795–I remember the day; no snow then either–now known as the University of North Carolina Chapel Hill.

Carolina’s song, The Old North State, has closing lyrics “As happy a region as on this side of heaven, where plenty and peace, love and joy smile before us.” And plenty of gumption, too. As Elmore closed, he said, “Lots of interest in having snowshoeing here. The town of Beech Mountain and their Winterfest celebration will certainly have their second qualifying race in 2012. Hopefully, Mother Nature will be a little kinder to us then.” 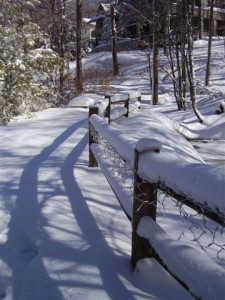 And everyone can ascend with snowshoes to their theme: “Elevate your Recreation.” The state’s toast says they have to: “The near land, the dear land, whatever fate. The blessed land, the best land, the Old North State!”

Then everyone can buy a house located where? Snowshoe Lane, Blowing Rock, NC, of course.