The 12th season of the United States Snowshoe Association (USSSA) qualifying snowshoe events kicked off December 10, 2011, with the 18th annual Jingle Bell Snowshoe Race on the dirt at the birthplace of competitive U.S. snowshoeing, Paul Smith’s College. This is a disappointing beginning to this dynamic year race as qualifiers are working their way to the Rockies to race the Dion Snowshoes USSSA National Snowshoe Championships in Frisco, CO with an early date: February 24-26, 2012. 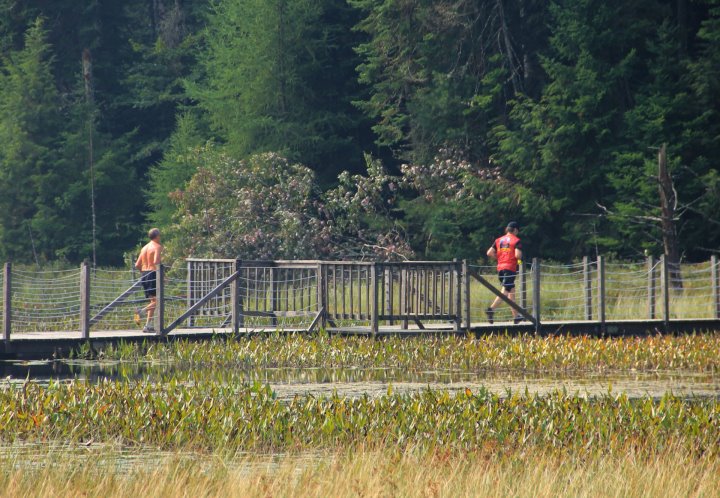 The floating bridge stretching over the Heron Marsh trail

But, fun and exciting racing occurred anyway providing some advantages in the points battles that will no doubt occur in the regional snowshoe series.

Held on The College of the Adirondacks’ VIC (Visitors Interpretative Center) trails nearby, thousands of acres surround the area with Boreal Forest, marshes and the Jenkins Mountain towering up. This is an important year as the College has assumed ownership and management responsibilities for this Adirondack Park. 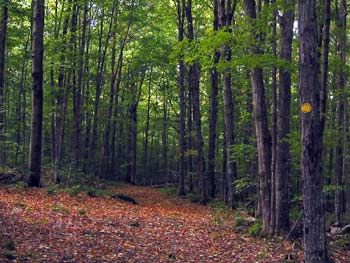 The silviculture trail approaches a mile in length of easy trails

The course includes the Heron Marsh Trail and the Silviculture trail skirting wetlands and ponds. Much of the topography is hilly, up to 5,000 feet.

In the 8 km loop, 16-year-old Erick Hulbert continued his fast ways, shoeing away with a 48-second victory over Paul Smith’s Jack Mulvihill . . . that’s trail shoeing for this year’s edition. Hulbert ran a 19 minute flat 5000 M in track sectionals in early November, following an almost exact time at the Adirondack Invitationals. His running prowess paid off at this snowshoe race turned trail run. 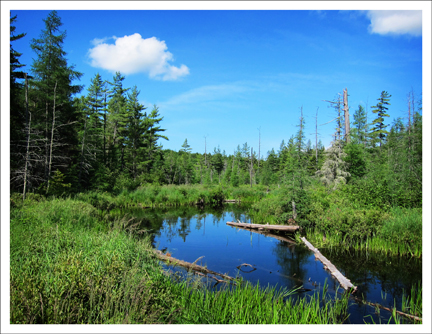 In a perfect world, the grass would be covered with white, and the marsh frozen over

In the 16 km race, Jeremy Drowne dominated both loops with a 1:11 finish followed by Kenny Burd’s 1:23. Burd edged Eric Kowalik of PSC by a narrow 17 seconds as Kowalik turned up the heat and dramatically cut the halfway margin of nearly two-and-a-half minutes. Drowne, 34, is highly experienced at this distance as shown by his 55th placement in the highly competitive 2010 Utica Boilermaker Road Race. He covered that 15 km course in 51:25.

There were no women entrants in the 16 km.

Young snowshoers (under 10) ran a 1 km lap with Adam Ploe, Carsen Coleman, Specer Davies, Cameron Coleman and Anna Ploe (the only girl) finishing in this order.

Weather, as in this case of a lack of snow in the right states, was a disappointment for this first event in the 2012 Dion Empire State Snowshoe Series. But there are 11 more to go, plenty of time to have fun on the snow. With the winner of the series taken from the top six events, and since trail running will typically be quicker than snowshoeing, those who braved the dirt and competed may have a leg-up on the series title or perhaps making the podium.

Unique to this race, all participants have a free pass to the Paul Smith’s College swimming pool for a post-race dip; just like summer in December.