“Would you care to try a “little coffin?” asks George, our bike tour guide.

“A “little coffin” is a typical Czech pastry. They’re very good,” he said.

We head towards the local bakery, next to a bike shop on a street corner in Litomerice, Czech Republic. It’s midway through a week-long guided biking trip. A big metal tray of ‘little coffins” is displayed behind glass. These pastries are rather small rectangular bars of light airy dough and iced with swirls of very sweet vanilla cream. With a cup of rich black coffee, George is absolutely right; the “little coffins” are very good. This is a great way to spend time waiting for the rain to stop.

Rain clouds hover over Prague’s Old Town Square. It’s Saturday morning and in spite of a near downpour, spectators gather in front of the Town Hall. The Astronomical Clock at the top of building displays the procession of the 12 Apostles on the hour. Shortly after the clock strikes, a bride in a billowy white dress and groom in grey suit and matching tie, emerge from the Town Hall. A guard tries to push away the crowd so the smiling newlyweds can enter their waiting limousine. Close by, vendors in the square are setting up shop for the weekend.

Big, fat hams are roasting over a wood burning fire. Juices from the meat crackle, spit and pop when they hit the flames. Bottles of Slivovice, the Czech brandy and made from either apricots, plums or pears, line the counters on some stalls. Tourists queue up at excursions booths where city tours are sold. The church of Saint Nicholas, a good example of high baroque architecture, is now open and it’s possible to purchase tickets for this evening’s organ concert. Waiters scurry to put out menus and wipe the seats at the side walk cafes surrounding the square.

Phil and I spend a few days in Prague before we begin biking to Dresden, along the Vltava and Elbe rivers. We stay at the Savic Hotel which is on a cobblestone alley, a few minutes from the square. The view from our window on the third floor is a reality painting and presents a typical picture of the city. Red/orange tiles cover the slanted roofs of nearby buildings. The buildings are of different heights and sizes so the roof tops create a jumble of odd angles and patterns. Many local artists paint these views of Prague’s colorful, geometric skyline and the paintings are often found along Charles Bridge.

Just around the corner from our hotel is U Zlate´ho tygra (The Golden Tiger), the famous Prague pub. Here the ghost of Franz Kafka lingers and you can drink a Pilsner Urquell, the best known Czech beer. The pub is crowded and filled with cigarette smoke but we managed to squeeze in and sit on one of the benches that border the room. Somewhat high wood tables, meant for sharing, surround the room which is as big as a hall. Within minutes a waiter in a long sleeved white shirt and long black apron appears. We order, he nods. He makes two slashes on a slip of paper, and then hurries away. Soon the waiter is back and places 2 glasses of Pilsner Urquell before us. The beer is golden with a thick edge of creamy white foam at the top of the glass. One sip and I know why this beer is a favorite among Czechs and foreigners.

The hotel receptionist tells us about a restaurant where the Czech people like to dine. We follow the curving street, cross a trolley line to U Medvikku, where the first Prague cabaret was situated and subsequently rebuilt into a brewery. We enter a traditional Czech beer hall with wooden tables and chairs scattered about.

A few black and white photographs decorate the white walls. Most of the tables are occupied but a waiter sees us and signals towards a table against the wall. I order roast boar with creamed spinach and Phil tries baked pork knee with white bread dumpling. We’re content to be dining among locals in such an authentic atmosphere. As we eat and enjoy the typical Czech cuisine, the door to the restaurant swings open and a busload of Asian tourists arrives. Like a line of army ants, the group weaves through the tables and is ushered to an adjoining room that is used for large parties and tour groups.

On Monday, we meet George our biking guide in the hotel lobby. Mileage for this bike tour is around 200 miles. During the year, George works at Charles University in the computer education department. Wearing bike shorts and flip flops, he picks up our suitcases without any effort and heads towards his parked car. We trot along behind him. Speeding through the city, we reach the trailhead on the Vlata River. Here we meet Annika, George’s girlfriend, the one in charge of transporting our luggage each day for the week.

Annika also works at Charles University. She’s a former volley ball player, about 5’10”, with dark, dark eyes and hair, pale skin and gorgeous. . This must be a new romance. George and Annika can barely keep their hands off each other. Phil and I try to look the other way. It’s just the four of us on this bike journey and we eat breakfast, lunch and dinner together each day. Annika does not speak English and we don’t speak Czech but somehow we manage to communicate and develop a bond.

My assigned bike is heavy, with fat tires and a high cross bar. Later in the week, I’m glad I have this clunker as we ride though thick gravel, over rocks, pot holes and very deep puddles. “How’s the trail today”, I ask George.

We’re off, following the bike path next to the Vltava River, the longest river in the Czech Republic. We veer away from the river for a time and ride past fields of wheat that shimmer and bend from the wind. The fields are sprinkled with bright red poppies and white daisies. We pass plots of hops strung on wires. George knows where to turn on the road to cross the river. Walking through waist high grasses, we reach a narrow stair case leading to a bridge. A gas pipe line takes up most of the space on the bridge, so walk our bikes across, descend and we’re back on the bike trail. 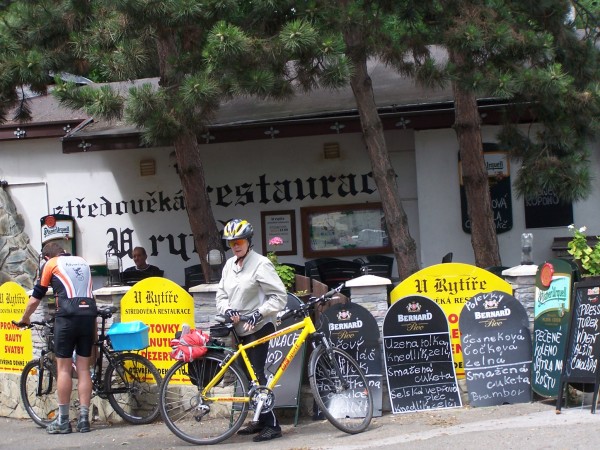 Along the route, George points to a two story white, clapboard house. A small bronze plague marks the birth place of Antonín Dvorák, the famous Czech composer, known for creating romantic and chamber music as well as operas and symphonies. Further along on the bike trail, we reach the “no big deal” hill. I struggle with ascending while alternating walking and grinding up slowly on the bike. Towards the end of the day we arrive at yet another big hill. It’s upwards to the Hotel Jaro in Mêlnick, a wine producing region.

In the morning, we ride down the hill in a heavy mist to the confluence of the Vltava and Elbe Rivers. Crossing the bridge with heavy traffic, we bike on a very cramped side road to the bike path. Now we follow the Elbe, one of the major rivers of Central Europe. The trail is flat and lined with tall Queen Anne’s lace plants. The mist turns into a downpour and the Elbe looks like it’s boiling. Relief from this rain is necessary and fortunately a pub is nearby.

Workmen seeking refuge too, sit at the wood tables, drinking beer. When the rain quits, we start out for a short while only to stop once more when the rain begins again. Annika comes to the rescue. We pile into the car, along with the bikes and she drives us very quickly to Litomerice. There’s no room for George but he doesn’t seem to mind. He dons a rain jacket but keeps his flip flops on.

The sun plays hide and seek throughout the week. We bike along the path as the Elbe bends and curves offering spectacular views. Dramatic cliffs on one side and castles galore dot the landscape on the other. By Thursday, we arrive in Hrensko, a border town located in the heart of the Czech-Saxon Switzerland National Park. Entrance to the park is crowded with many little shops operated by Vietnamese vendors. Hotels and hostels clutter on both sides of the road. But it’s uphill for us. Annika roller blades behind me and every so often she touches my shoulder for a little push as I struggle upwards towards our hotel for the night.

On the last day of biking, Dresden is 31 miles away and we reach the town, crossing the Elbe, on several ferries. Here we say good bye to George and Annika and we’re on our own. We miss having dinner with them. 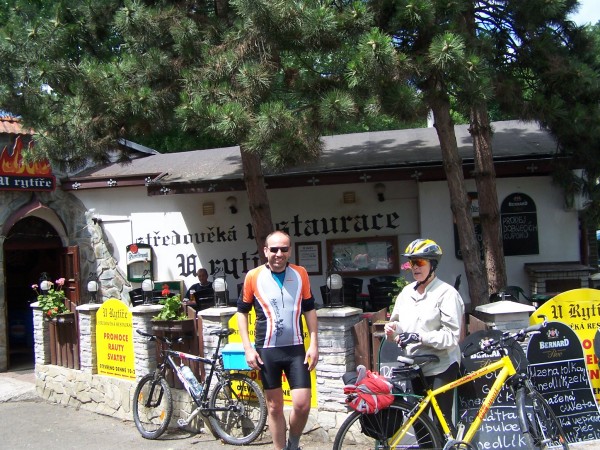 A city of striking contrasts, Dresden was completely destroyed during the Second World War but was rebuilt 60 years later. It’s a showcase of old and new. The Altmarkt, Dresden’s oldest market square, houses a mega mall in a neo-baroque building that covers three city blocks. The mall is three stories high and includes high end shops, like GAP, ZARA, BOSS and an Apple store. There’s even a food court. One of our guide books recommends the food court as a good place to eat. At one counter, long and short, fat and skinny sausages dangle from an overhead rack. A display case below presents a variety of open face sandwiches, including one with steak tartare garnished with a thin slice of red onion. Across the way, desserts are available.

Our hotel for the next two nights is directly across from the Frauenkirche Church. The church was originally built between 1726 to 1743 but it was bombed completely and then rebuilt. We’re within walking distance of the major sights and we make short visits to ZWINGER (known as the hall in the open air which encloses a cluster of baroque buildings and pavilions), the Royal Palace, the Semper Opera House and the Bruhl Terrace, also called the “balcony of Europe”. A panoramic view of the city can be seen from here.

It’s hard to believe that our journey has ended. As always, the time passed much too quickly. We leave for home with many fond memories of people and places.

For more information, visit www.bikeholidays.eu. If you plan a trip, don’t forget to request George as a guide.