A black ribbon curlicues into the distance, cutting a meandering but distinct line through the greenscape. Immediately in front of me, the blacktop wends left, then left again before hightailing it steeply downhill to the right. I lower into the drops of the bike’s handlebars, tuck my knees to my chest, lean into the downturn of California’s Highway 49, and go.

Air as hot as the inside of a sauna whizzes past my ear. Roadside trees blur into a high-speed, green slurry. Carbon fiber buzzes ever so slightly, a sensation that is more felt than heard, as it absorbs the road. My skinny tires roll over the highway’s solid white line.

A red pick-up truck pulls even with me, the gloss of its hood flashing like a beacon in the midday sun. Its passenger, a heavyset woman with pink polka dots on her shirt, says something that I cannot understand. Her mouth moves normally, but her words arrive to my ears sounding like Charlie Brown’s teacher. The world is, apparently, happening faster than my brain can process it.

I feather my brakes until my speed slows to a world I can comprehend. I look to the woman again—the truck has remained even with me on this deserted road—and can, finally, understand her, “You were going 46 miles per hour!” She and the truck’s driver grin widely before continuing down the hill. They are as excited about this descent as I am.

The Sierra Nevada is a massive mountain range, stretching 400 miles long and 80 miles wide through eastern California. From the state’s Central Valley, the western foothills rise gently into the range’s high ridges and peaks. In the foothills, hundreds of miles of two-lane roads snake among lush greenery and see-forever views. Constantly curving, laced with screamer descents and thigh-destroying climbs, topped with butter-smooth surfaces, and occupied by only a bit of tourist traffic doing the same scenery gawking as you: these roads seem born for road biking. 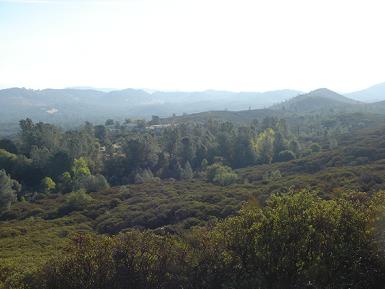 It is in this region that John Marshall and John Sutter found gold in 1848, beginning the California Gold Rush and giving reason for the building of prospecting roads and trails through these foothills. Just as some believe gold still lingers in hidden mountain pockets, so linger the roads upon which we play today.

After a short but wild descent, I pause atop the Bagby Bridge, which spans the broiling waters of the Merced River. This canyon is like an oven, and its dry heat evaporates sweat from my temples at the same rate that it forms. I guzzle water from my bottle and notice that one of my cycling shoes feels looser than the other. When I lean over to make an adjustment, I see that one strap has detached. The glue on the back of the Velcro strap has just plain melted! While I carry the typical cyclist’s repair kit, I’ve got nothing of the rubber cement variety to solve my problem. The glue is gooey, so I press the strap against the shoe and it holds. Not perfectly, but it does hold. I remount my bike for the steep, northbound climb away from the Merced River. It’s a handful of uphill, then downhill miles to the village of Coulterville and I’m hopeful that its residents, a hundred or so resourceful folks living in the middle of almost nowhere, can help me with my shoe predicament.

The climb is what I would call perfect, uphill but at a grade that allows me to stay out of my granny gears and moving well. Blue Oaks press toward the edge of the road, their lobed leaves lifted by an almost imperceptible breeze. A Maserati convertible passes me like I’m unmoving, its driver casting an extended wave. When I crest the climb, I take a short pull of water, check in on my melted cycling shoe to see that it’s still sticking, and begin the descent into town.

Perhaps the best cycling offered in the western Sierra Nevada foothills is between Auburn and Oakhurst, which are connected by the area’s artery, Highway 49. A host of other roads dissect the region, running both parallel and perpendicular to Highway 49. Day trips and touring opportunities are abounds here, from point-to-point trips to circuits of varying sizes. 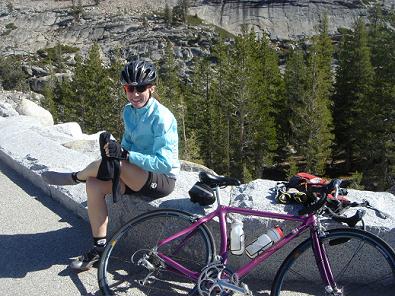 Small towns and villages dot the roadways and provide ample spots for food, lodging, and re-supply. Towns are located every 20 to 30 miles in the foothills, allowing you to create trips of the length and intensity you desire. One of my favorite half-day loops, for example, is out of Mariposa to Catheys Valley, Hornitos, Bear Valley, and back to Mariposa again.

It’s the heat of the afternoon as I arrive to Coulterville, and the thermometer in front of the small general store there reads 109 degrees Fahrenheit. When I see a freezer filled with ice cream inside, I forget about my broken shoe and buy an ice cream sandwich held together by two giant chocolate chip cookies. On the general store’s shade porch, I dig into my delight. It melts fast at this temperature, so I look a bit like a whirling dervish deep in celebration as I eat. One sandwich isn’t enough, nor is two. I’ve been riding my bike for three hours, and I still have to turn around and do it all over again. A can of Coca-Cola does the final, sating trick.

I’m giddy with the sugar that’s now coursing through my body, and fast to mount my bike and begin the climb back out of Coulterville. A few miles out, I remember my shoe. Magic must be holding it firm, however, because the strap still works. As I climb toward the Sierra Nevada heavens, I realize that, between the lady with the polka dot shirt, the melted shoe, the zooming convertible, and the ice cream, this is a cycling adventure I’ll long remember.

Begin planning the logistics of a cycling outing in the western Sierra Nevada foothills by contacting local chambers of commerce. Here are some good towns to start with:

Photo 2- The author takes a break while cycling in the Sierra Nevada (photo courtesy of Meghan M. Hicks). 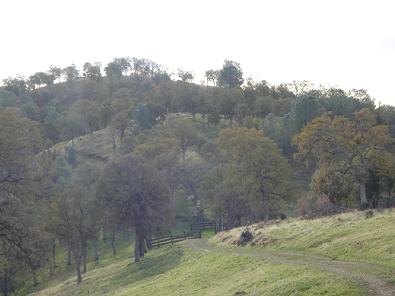