A down slope breeze whispers from the west, off the Teton Range and through the Lupine Meadows Trailhead in Grand Teton National Park. It is 4 a.m. and otherwise silent here at 6,700 feet above sea level as our pack of four begins its uphill journey in sleepy, stuttered steps.

Mike and Sarah are hiking fanatics who log 50 or 60 miles during a normal weekend. Rick and I are ultrarunners who race distances of more than a marathon, mostly on trails. We are a rough-and-tumble bunch beginning a rough-and-tumble day. If all goes well, we’ll trek to the summits of both the Middle and South Tetons, a roundtrip journey of more than 20 miles—half of them off-trail—and about 8,000 feet of elevation gain, before returning to this trailhead tonight.

Wyoming’s Teton Range, a snaking line of mountains that rise from Teton Valley to the west and the Snake River Valley to the east like snaggled teeth, owns me. In the 1980s, my family road-tripped the West in a maroon-colored Ford station wagon from our Midwest home. The kid version of myself watched in wonder as my mom full on screamed and jumped around when we pulled into view of the Teton Range. I’ve since journeyed to Grand Teton National Park more times than I have fingers and toes. I can’t get enough of this place and, though I don’t yet see today’s playground, I can feel it, so I pray that I never do.

We’re working off the fuzz of not much sleep and an overnight drive to the trailhead, and though we carry with us strong spirits for the day, we’re not yet ready to chat. When we began, mountains cut a jagged, black profile through a Persian blue earliest-of-morning sky. Now we have been gobbled up into the dark heart of the range and Rick says, “This is like entering a cathedral.” 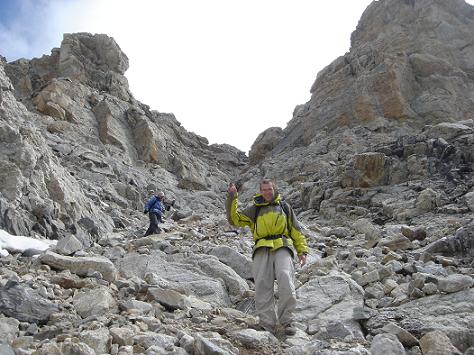 Two hours later, we’ve followed the switchbacking trail to its terminus at the back of the Meadows, a backpacker’s camp here in Garnet Canyon. Pre-dawn provides enough light to spy on the morning activities of this camp, including the man gathering water from the creek wearing only hiking boots and underpants. From here, we follow a cairned and mostly trail-less route to the saddle that separates the Middle and South Tetons at about 11,450 feet elevation, more uphill miles from here.

It’s August, but much snow remains, and the cairns disappear into a steep and hard-frozen snowfield. Safe passage across it requires mountaineering gear that we don’t have, crampons and an ice axe at the very least. We still take a few testing kick steps onto the snowfield. Mike is the bravest, or perhaps the least self-preservational, and he ventures 15 meters out. After retreating, he summarizes, “We could do it and not die. Probably.” None of us trusts probably so we take long and grueling care to ascend the boulders on one side of the snowfield, cross above it, and contour a glacial moraine to rejoin the route. We repeat this process a time-consuming two more times before we reach the saddle.

The notch between the Middle and South Tetons offers a view past Ice Floe Lake and the western Teton Mountains so pretty it buckles my knees. We take time to buffer our bodies from the high-altitude wind with down jackets and mittens and to consume snacks to fuel our first summit push. As we chow on Fig Newtons, Goldfish, and Twizzlers, we bet about whether or not the day will blossom the thunderstorms for which this range is known.

The sky is giving us the all clear, though, so we push for the 12,804-foot Middle Teton. We take time to avoid one more snowfield before we funnel our foursome into the summit’s thousand-foot tall Southwest Couloir. The route through it and the last 150 vertical feet of ridgeline is Class III with perhaps two Class IV scrambles. “This feels like the tippy top of the world,” I say to my friends as we paw mitted high-fives to each other on the summit rocks. A cotton ball-shaped cloud swallows us whole, then puffs on eastward.

To the east and west, the Earth falls away so dramatically that looking in these directions makes the contents of my stomach shift. To the north, the Grand Teton looms almost 1,000 vertical feet above us. Another friend is climbing that mountain today, and he should be about on its summit now, too. I wave in his direction, then laugh at the absurdity of communicating with someone across a landscape as forever reaching as this one. 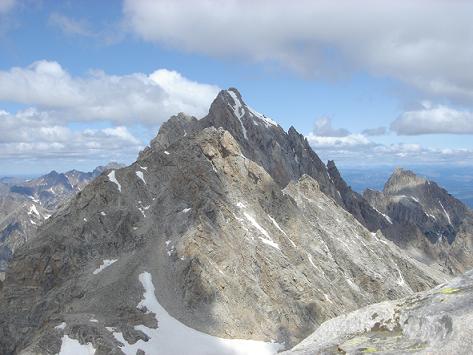 To the south, the South Teton sits shorter and stouter. It’s also calling our name, so after a 30-minute peak party, we drop carefully into the Southwest Couloir again. The rocks are loose, so we descend as a tight pack. Back at the saddle, we take a short break, then begin our ascent of the South Teton.

At 2:30 p.m., we reach the top of the 12,514-foot South Teton under the same docile, cotton-ball clouds. We’ve been traveling for more than 10 hours on just a nap, so we each pull up slabs of sun-warmed rock and lapse into catnaps. I dream I am a fairy with wings like a butterfly and ballerina shoes on my feet. I leap from mountaintop to top with open-legged jumps and a few wing beats. When I wake, I realize that the real-life descent from this mountain will involve a little more work.

After a rapid descent to the saddle, we begin the downward journey through the glacial moraines and snowfields that slowed us this morning. I’ve been worried about this part of the day, but I fast find my concerns unnecessary. Subjected to a day’s worth of high-altitude sun, the snowfields are soft, totally traversable, and dare I say, fun to descend. We skitter down the snow in varying kinds of foot and butt-based glissades, squealing like pigs in slop.

We gain an eastward view through Garnet Canyon to the Snake River Valley. It’s lit by jasmine sunset light but bisected by the black, bladed shadow of the Teton Range. It feels like a movie set, too beautiful to be real, so I snap a photo as proof. I’m sleepy and stumbling, too, so I also take the photo in case I lose this memory to exhaustion.

Seventeen hours after beginning our journey, and one hour after we, literally, scared the poop out of a little black bear grazing along the last couple miles of trail, we arrive at the Lupine Meadows Trailhead. It’s 9 p.m. and, once again, pitch black and dead quiet, save for a little wind sending into the air the scent of sagebrush. Each of us is ready to be unconscious the moment our bodies stop moving. 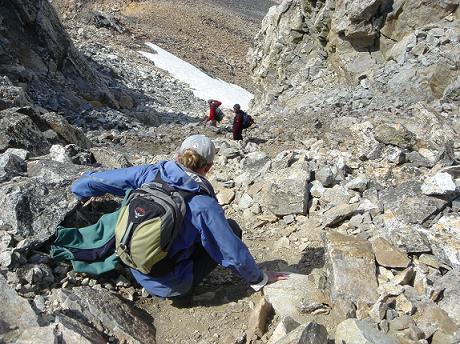 If you asked me to turn on a dime and go back into the mountains right now, I would. My tired mind and body would chug itself back up the trail, past the skittish black bear, the underpants campground man, the steep snowfields, the glacial boulders, and the summit scrambles. All of it I’d do again because these mountains own me and I’m still not sated.

About half of the route described here is typical singletrack trail. Another quarter of the distance is a cairned route over variable surfaces ranging from vegetation-less ground to glacial moraines. The other quarter is on the exposed and rocky sides of steep Teton Range mountains, where you can (and people have) fall to their death. Bring with you the ability and gear to safely traverse Class II, III, and IV terrain. Trekking season is generally late July to late September. The Teton Range experiences summer thunderstorms, so begin outings early and be ready to bail if the skies change. Getting caught in cold rain and lightning can endanger the most savvy of backcountry travelers.

The 310,000 acres and 240 miles of trails in Grand Teton National Park are a backcountry paradise administered by the National Park Service in western Wyoming. Surrounding the national park are millions more acres of other federally designated open space. This vast tract of undeveloped land could fill several lifetimes of play.

Photo 2- Looking north from the South Teton summit, the Middle Teton is alighted by sun and the Grand Teton looms larger in the background (Meghan M. Hicks photo credit).

Photo 4- Rick smiles on the flank of the South Teton. The saddle that separates the Middle and South Tetons is to the left of Rick’s left foot, and the Middle Teton’s Southwest Couloir rises above his head. The Grand Teton’s summit juts out from behind the top of the Middle Teton (Meghan M. Hicks photo credit). 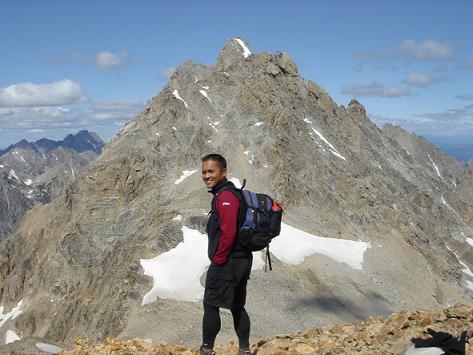