In this world there is an élite group of athletes.  They show strength, determination, pride and dedication.  They inspire us to do more, to push harder and to challenge ourselves – even when we think it is impossible.  This group doesn’t believe in the phrases “it’s too hard” or “I can’t do it.” These athletes are special not because of their disabilities but because of their “differing abilities.”

It was a great honor to attend the 2011 Idaho Special Olympics.  I was given the opportunity to not only present awards to these amazing athletes but to spend the day surrounded by the most wonderful group of people I have ever met.

The snowshoe event was held at Trinity Pines Camp just outside Cascade, Idaho.  Trinity Pines Camp and Conference Center boast an amazing array of activities including a zip line, kids playground, climbing wall, cabins, RV Park, and so much more.  The town is a small but active community where recreation abounds and the people are always warm and welcoming.  The event could not have had better weather or a more beautiful location.  The area was surrounded by mountains, covered in pine trees, warmed by sunshine and blanketed with snow.  Athletes from all over Idaho turned out to compete for the Gold, Silver, and Bronze.

When I entered the lodge’s main floor dining area the energy was high.  Competitors were just finishing breakfast and beginning to group together with their teams.  Moving through the groups of athletes I found Dallas Leatham, VP of Operations for the Idaho Special Olympics.  He was welcoming and grateful for my help.

As the start time was quickly approaching he put me to work doing a small job on his huge list of things that needed to be done before the event could begin.  With the title of VP you might assume he is all about his job and never has time for the people below him, but in this case you would be entirely wrong.  This VP spent as much time talking to volunteers and athletes as he did doing the jobs he needed to do.  Not once did I hear him say he was “too busy” to answer questions.  Nor did he turn away any athlete looking for a last-minute handshake or some positive words of encouragement.  No matter how big his work load he always took time to put others first.  He represented the Idaho Special Olympics with professionalism, leadership and dedication.

As I stapled the last race packets I realized the moment had finally arrived the action was about to begin.  While the first heat of athletes made their way out to the starting line, I was placed with a director for a rundown of how the day’s events would unfold.  While I toured the awards stage I was given direction on how to present.  It all seemed surreal to me, seeing so many people from all different walks of life working together.  The event had brought in police officers, parks and recreation officials, teachers, mothers, cheerleaders, and so many more.

With both long courses and short courses on the schedule I knew the snowshoe event would be exciting to watch. As I looked around at the next group of racers lining up, I could see the determination in their eyes.  They had trained long and hard for this moment.  Everywhere I looked there were champions on snowshoes. The competition was tough, but they made it look easy with the speed and agility that only a true athlete can exhibit.

I took a few minutes before we began presenting awards to walk around and shake the hands of the athletes.  I felt humbled by their ability to make me feel like an old friend with warm conversations and an abundance of laughter.  I met contestants of all ages, from all over the state and each had their favorite brand of snowshoes.  When I ask these athletes why they chose snowshoeing the answers varied, but all had one thing in common: Their love of the sport.

Being an avid recreational snowshoer, I know just how incredible floating on snow feels.  For these athletes, snowshoes give them more than just freedom, they build confidence, coördination, self-esteem and friendships.

Many of these athletes have competed for years.  I had the privilege of speaking with Chad Schaff,  an athlete with 10 years of experience.  He has won medals of every color and loves the Special Olympics as much today as he did when he began competing.  I appreciated the time he gave me and the insight he shared about the people who dedicate themselves to this organization.  Chad is an outstanding athlete, an amazing snowshoer and a man with a deep appreciation for those who have helped him get where he is today. 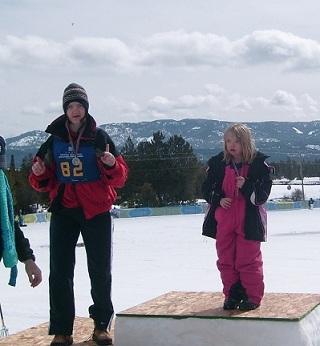 and her family.  Abby is the youngest female racer at these winter games.  She was competing in the 25 meter, 50 meter and the relay.  This amazing athlete has opened the doors for younger competitors.  Many coaches had thought she was too young to compete, but after seeing her winning race they quickly changed their minds and began to accept younger athletes.

The morning had passed quickly and it was time for lunch break. I used my time to go from group to group meeting more of the athletes.  I enjoyed learning their names and hearing their stories.  I encountered groups of competitors socializing, sharing tips and reflecting on past events. 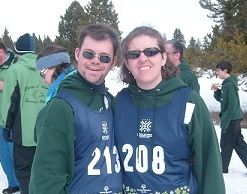 One man shared with me the story of how he met his wife.  The couple had met at an Olympic event, fallen in love and have been happily married for two years.  Jacob Watkins and his wife Adina are quite simply one of the most down-to-earth, friendly couples I have ever had the pleasure of meeting.

The snowshoeing continued through the afternoon.   Racers cro 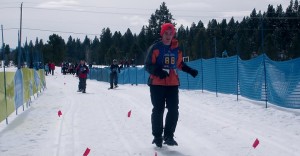 ssed the finish line with all the excitement and energy you would expect from an event like this.  Sometimes they crossed in groups so close together it was only through a skilled judge’s eye that a winner could be identified.  The afternoon was a flurry with racers moving from one race to the next many having back to back events and then heading to the awards presentation. 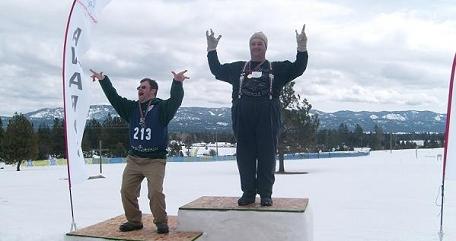 These athletes came together to compete against the best, to test themselves and to give it their all.  At the end of the day when the medals had been awarded and the athletes had removed their snowshoes there would be no regrets.