You know that old story about walking in four feet of snow and going uphill both ways? The Georgian Triangle Snowshoers sure do.

The Snowshoers are a Facebook-based group of outdoors enthusiasts who meet once or twice a week at the south end of Georgian Bay in Ontario, Canada, centred on The Blue Mountains region. The area is best-known as a haven for alpine activities, with Blue Mountain Resort as the hub along with several private clubs, but truthfully, it’s just as good an area for Nordic activities.

In the summer, the group switches gears to become the Georgian Triangle Hikers. As in the winter, they often meet twice a week to scamper up and down The Blue Mountains like well-conditioned mountain goats. Their pace will leave the average weekend warrior or recreational type gasping for mercy. 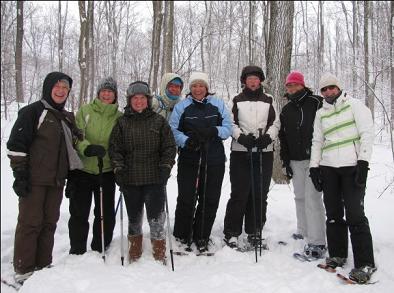 Of the core membership, more than 90 per cent are women, which might well make it unique.

Also unique is the focus on fitness. That’s not surprising since most of the core group, including founder Susan Brindisi, met at a “boot camp” managed by trainer Sara Heipel of Good Energy fitness.

“She inspired us, basically” explained Brindisi. “I’ve been through three of her camps. She started to incorporate a hike in some of these and I just loved it.”

“I believe the idea for the group got started last summer after taking my boot camp group on a hike one evening during the week off between boot camp programs,” said Heipel. “They enjoyed it so much they decided to make it a weekly event. We are so lucky to live so close to so many beautiful trails that are begging to be enjoyed. Making the time to answer that call is rewarding for both body and spirit.” 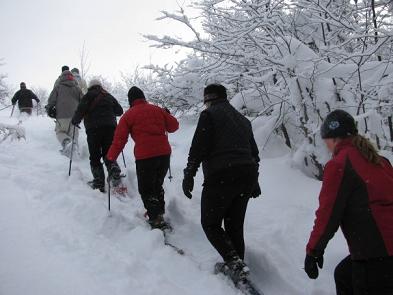 The demographics, though, is a conundrum, Brindisi said.

“We do have men who are members – they just don’t come out,” she said. “I started the group in 2009 just so that people could enjoy hiking.”

Brindisi is perhaps the most enthusiastic snowshoer in the club. She lives at the top of The Blue Mountains, not far from the venerable Bruce Trail and Scenic Caves Nordic Centre, which is perhaps the premier venue of its kind in the area.

Most of the excursions in the winter involve the Bruce Trail, as there are several looping side trails in the region that are both perfect for short outings and nigh-irresistible.

Recently, Brindisi participated in both the Ontario Tubbs Romp to Stomp event at Scenic Caves Nordic Centre, as well as the Nordicfest held earlier in February along with other members of the club.

For more information on the Georgian Triangle Snowshoers, click here. 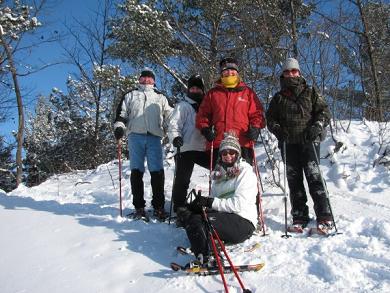