The White Clouds Mountains and their snow-covered trails lift snowshoers to the sky with peaks visible above 11,000 feet. Welcome to the Sun Valley Nordic and Snowshoe Center in the backyard of the world famous Sun Valley Lodge and the stunning terrain — perfect place for a USSSA Championship showdown at high noon!

Here the confrontation at 12 bells takes place with snowshoes clacking snow, firing rooster tails while filling the eyes with vista views in these eastern Rocky Mountains. Both 5 km and the 10 km qualifier launch together on a course described as “well marked, safe and staffed,” along with the all important two aid stations. Tracking the White Clouds Nordic trail system, the route is groomed, packed single track and some cross country sections. The 10 km qualifier has the bonus of two loops for even more fun in this beautiful zig zag. Organizers said, “With the abundant snowfall, the course is in amazing condition, 100 per cent snowcover, no sage or dirt. The single track has been stomped in and is being maintained weekly.

The course starts happily enough, with a flat section leading to a small initial climb then starts to get serious at about the first kilometer. Some ridge running takes a competitor back to a bottom near the second kilometer, then in the clockwise loop, the snowshoer climbs to a peak before zooming superfast half-mile kilometer downhill to the finish, or another loop, with that flat start to catch one’s breath if you are in the lucky ten distance. One participant wrote on the event’s race site, “Knowing the race director, I expected a grueling course, and was not disappointed . . . The course represented snowshoeing at its best, with thigh busting open sections, beautiful vistas, and a long, screaming downhill single track to the finish.” 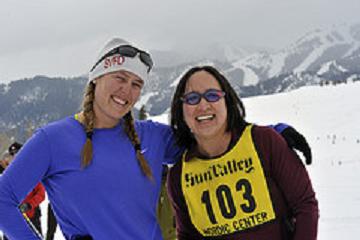 Andy Jones-Wilkins led everyone over the finish with a nine-minute lead over the exciting race for second. Kathy Morell battled Ian Blasch and finished just seconds ahead to win women’s overall and second overall. John Fox finished third male under two minutes later while Christopher Burns made the race from Florida along with Michael Naylor of California.

The citizens open was an aptly named wide-open affair for the first four finishers. Dick Anderson won with gold in 38:21, just a dozen seconds over Dan Young and New Hampshire’s Ross McLeod following seconds behind him.

Next came the women’s overall winner, EJ Harpham, followed by Cynthia Burns of the Florida clan, and Elizabeth McLeod of Virginia.  Also notable were the Lester’s, Ada and Allen of Virginia, finishing together and Matt and Russ Pillar, Idaho and California respectively finishing on both sides of the hour clock. 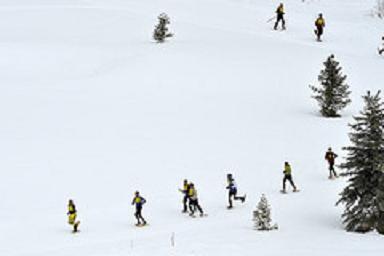 One sponsor, the Elephant’s Perch, has a named snowshoe race the week after the USSSA Nationals, so after running up and down the Kettle Moraine hills of Wisconsin, head out to the clouds for another chance to race before the season ends.

Atlas Snowshoes had models on hand for use by those who needed them or wanted to test their racers. Hammer Nutrition stocked the aid stations while Pete Lane’s Mountain Sports provided assistance, too.

Note to self: enter this event early and receive their official race beanie! Yes! Then, after sweating that finish downhill, gulp their hot chocolate, beanie in place, as you recover with warm snacks and cookies for your hard work.

There is a kids race, too, with “great parent spectating possibilities, kids snowshoes for use, finishers award for each, and the same food and snacks” offered to the big folks, too. Competition, exercise, and food should provide some quiet time in the back seat on the drive back to Idaho Falls or spending the night in the lodges. 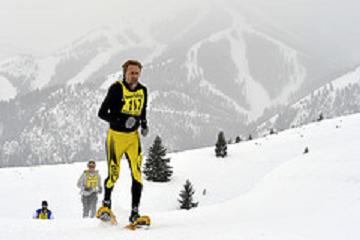