Big Foot identified at the Big Foot Boogie Qualifier, Michigan, and he bops and hops on the snow better than anyone else.

Traverse City nestles in the West Arm of Grand Traverse Bay while its boundaries spill over into its East Arm twin. The pair creates north-south slivers of an inlet — a giant piece of water anywhere else — but on the eastern shores of Lake Michigan, the big great lake dominates.

Dominates how? Something along the order of Yaro Middaugh’s (see Photo top) annual performances at the Bigfoot Boogie, one of the most popular of the DION USSSA National Championship qualifiers. In 2008, Middaugh finished second by 36 seconds to Nick Miller’s win. On 2009’s course, he won outright with a 56:58:25 tape with Miller giving chase, but a couple of minutes behind. 20 seconds later, teenager Ryan Rebain, chasing Miller, nailed third.

On the 2010 course, Middaugh won with a finish under fifty minutes, the only competitor to do so, ahead of Kevin Deyo, who showed at age 51 how to get it done. Rebain was right there, too, ninety seconds or so back taking another third overall. 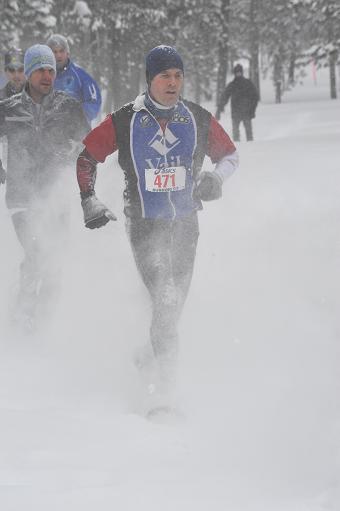 In the 2011 edition, Middaugh, was once again a medalist, third overall, in this exciting day of snowshoe racing as the first five finishers separated at the banner by less than one minute. Kevin Tarras won the gold, chased by Jeb Stone just four ticks back, then Middaugh, Samuel Darling and Jacques Henning.

In four years, Yaro Middaugh has won this race twice, and when not winning, finished second and third. His pace, his mastery of this terrain reveals he is the Bigfoot of “The Boogie.”

Over 100 finished this year’s event. Special note of the work RF Timing, with software by ChuckScore, providing both gun and chip time finishes. With the top five there was about a second difference for  the two clocks. 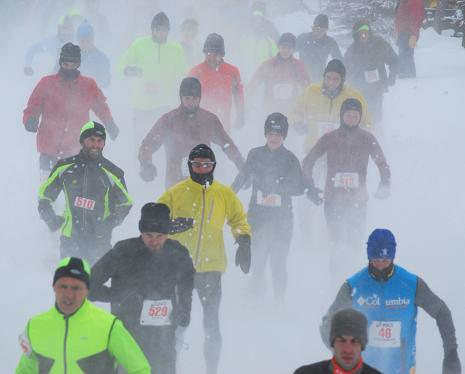 An adventure resort all on its own,The Timber Ridge Campground, is the location for the race. Interestingly, one of the more unique snowshoe races occurs here in March, combining ‘suds and snowshoes, a snowshoe race ending with local microbrews.

The Boogie cares. I understand their shirts are quite the collector’s item — as the race says on the registration, “You’ll want one.” But, check out this idea: Each finisher can print out their own memento of the race, a finisher’s certificate suitable for framing featuring the event’s unique logo — yes, Bigfoot on snowshoes, and they are modern ones, too — along with all important information like official finish time, age group finish, gender finish, and overall finish.

Hammer Nutrition, Running Fit and the USSSA are all displayed on the printout providing yet another advantage to sponsoring the race. Best of all, the certificate is signed by Randy Step with his prestigious title for the Bigfoot Boogie: “Head Goat.”

With the course a “super hilly off-trail run with plenty of logs to jump and branches to duck,” one can only count the time until the snows return for the 2012 Boogie on January 21 where once again weird assortments of animals — and hundreds of healthy snowshoe racers — converge on this American snowshoe qualifier.

Photos courtesy of Greg Sadler Photography / Sadlershots.com. Sadler specializes in family, sport, corporate and product event photography at very reasonable and affordable rates. These examples in my article reflect their combined ability to capture the action and bigtime feel of an event. Find yourself in the race here: http://bit.ly/f6hE92 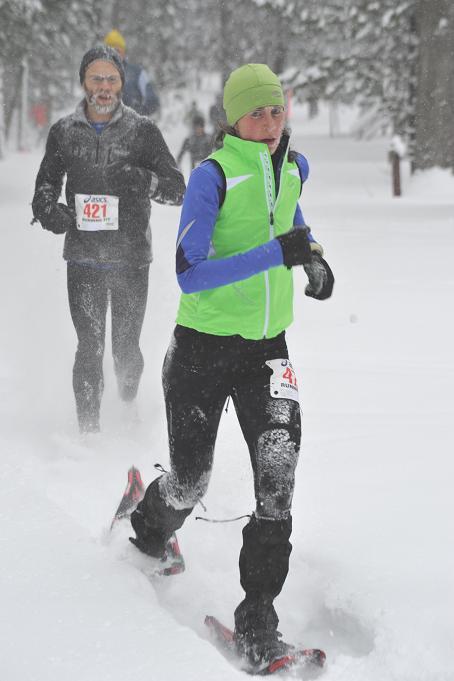 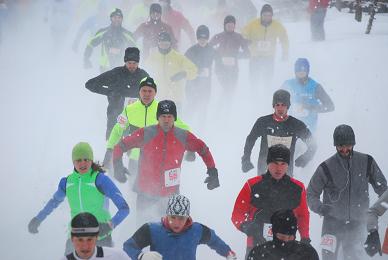