There’s nothing more festive than combining snowshoeing with a visit to a traditional German Christmas market. Many cities throughout this western European country, of 82 million, feature a Christmas market – Christkindlmarkt or Weihnachtsmarkt in German. With more than 150 official Christmas markets throughout Germany, Christkindlmärkte are celebrated during the four weeks of Advent. Each offers their own distinct celebration of Christmas.

For example, the quaint village of Murnau am Staffelsee, just south of the Bavarian capital Munich, is the perfect venue for experiencing both snowshoeing and a traditional Christkindlmarkt.

According to Murnau tourist information specialist Alexandra Sichart, “Our Christmas market is very traditional and is set against the attractive backdrop of the Alps.” The market features handmade crafts, including candles, Christmas ornaments, socks, and of course, Glühwein. The latter, also known as mulled wine, is usually prepared from red wine, heated and spiced with cinnamon sticks. It’s great for warming the body on a cold wintry night. 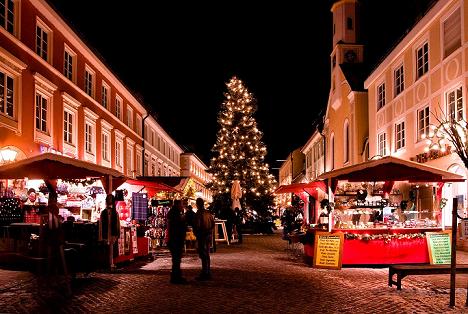 Adding to the festive setting of the holiday season, concerts are held in the baroque Church of St. Nicholas, along with horse-drawn sleigh rides through the Murnauer Moos, a picturesque nature preserve. The Murnauer Moos is also the preferred venue for snowshoeing.

Though visitors can snowshoe the trails of the preserve on their own, the city of Murnau also offers guided snowshoe tours every Monday beginning Dec. 27.

“Our snowshoe tours are always on Monday, beginning at 2 p.m., and take about two hours,” says Sichart. “The price is 15 Euros (about $20), which includes the snowshoe equipment, Glühwein, and biscuits (German snacks).”

As part of Murnau’s winter program, since 1995, the snowshoe hikes are easy routes of about 2.5 miles. The Murnauer Moos is just one of many snowshoe options in Murnau and Staffelsee, which is part of the district of Garmisch-Partenkirchen. The popular ski resort of the same name is less than 20 minutes to the south near the Austrian border. 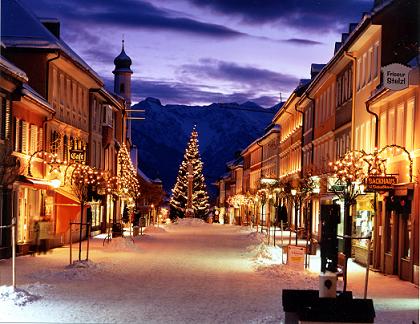 For those desiring a little more challenge, Sichart suggests snowshoeing up nearby Mount Hoernle, a 4,600-foot hill in the nearby village of Bad Kohlgrub.

After snowshoeing and shopping in Murnau, don’t miss a visit to theSchloßmuseum. Picturesque corners and narrow alleyways inspired world-famous paintings by Wassily Kandinsky and Gabriele Meunter; both were both part of the Blue Rider group of Expressionist painters from the early 20th Century. The Schloßmuseum shows the internationally significant history of art and literature connected to Murnau a century ago.

Small restaurants, cafes, boutiques, and international visitors give Murnau its special flair. With a population of 12,000, Murnau has adequate hotels to accommodate its many guests. More than 1,300 beds are available in a variety of settings, including hotels, inns, bed & breakfasts and guesthouses, private homes, and farms. A few that have very good reputations include Griesbräu zu Murnau, Hotel Ludwig, Hotel Post, and the upscale Hotel Klausenhof, located in the heart of town.

One visit to Murnau and it’s easy to see why city officials market the region as having Lebenslustatmen, or “Inhaling the lust for life.” Snowshoeing is a part of that Lebenslustatmen. 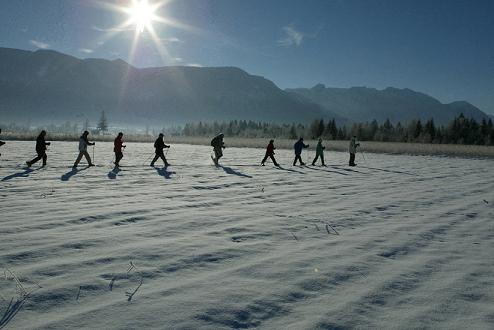