Whatever the name, Turkey Day runs have proliferated, becoming as much of a tradition as the Macy’s Thanksgiving parade. What was the name of the race you were in? One stands out as quite special.

Whether snowshoeing or runshoeing there is a special feeling of gathering together on Thanksgiving. Pilgrims competed with musket rifle games, but cities look askance at blasting a ball in metro areas, so we crowd halls, tents and buildings to prep ourselves for a good ole fashion foot-race. It may be cold, snowy, rainy or a bright day, but these races are growing in numbers and popularity.

Whatever the distance and whatever the finishing placement, one can always smirk inwardly, enjoying the number one advantage of a Thanksgiving Day competition. Why is that? No, not being with family and friends outside, though important and nice; no, not helping others by donating food goods collected at races, but it does reflect the caring attitudes of outdoor athletes, and no, not hanging around fit, happy and nice people that seem to dominate the start lines at all of these events — why is it being outdoors and exercising makes us so happy.

The real reason we grin is . . . we can eat out hearts out today with second portions and even more of that devilish gravy. While we are at it, how ’bout another piece of pie — everybody needs pie — because we got a wonderful start to cranking up the day’s metabolism and creating a calorie deficit that definitely needs filling. Definitely.

Were you at: Any of the 17 Turkey Trots raced in Ohio from the favorite 5 km distance, five-mile, 10 km and all sorts of variations in-between. Favorite name?

For the vowel challenged among us, how about the Tuscarawas County YMCA Turkey Trot 5K in Dover, Ohio.Then there was the Galloping Gobble 4 Miler in Fort Wayne, Indiana, Feed the Need 5K in Kenova, West Virginia, or perhaps Arnold Palmer was Turkey Trotting at the start line in Latrobe, Pennsylvania .

Sandwich, Massachusetts, holds their We Gather Together 5K while Sandwich, New Hampshire waits for the annual USSSA qualifier they race — called the Sidehiller — on January 29.Out west, surely everyone in Littleton, Colorado, could not miss the Clement Park 5k Gobble Wobble, no doubt named after many of our running gaits, and the related Hobbler Gobbler 10k in Albuquerque, New Mexico.

They do Thanksgiving differently in Owasso, Oklahoma, with their popular 9th Annual Hog Jog just like the Huffing for Stuffing Thanksgiving Day Run in Bozeman, Montana. 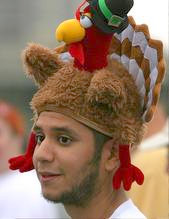 On the coasts, Florida has Cocoa Beach launching their Space Coast Art Festival Turkey Trot 5k, and the aptly named Run 4 the Pies in Tequesta. San Jose would not want us to forget their claim to fame with the Applied Materials Silicon Valley 2010 Turkey Trot chipping away pounds.

Around the USA there was the Tamarac Turkey Trot 8K with its unique distance in Fremont, Michigan for its inaugural year. They also ran a Gobbler and Hen 2 mile walk — wonder how many couples did that one together? — and the Poult Prance Mile. In the best of the Thanksgiving tradition of gobbling up awards, this 8K had finishing awards for the Youngest Poult, Oldest Gobbler (and Hen, but the hens I know are always young at heart). The Stuffed Turkey awards goes to — care to guess? — the heaviest runner, the Slowest Trotter awarded to . . . well, you get it, and the Best “Dressed” Turkey.

Austin, Texas has the ThunderCloud Subs Turkey Trot (photo, turkey on head www.statesman.com American Statesman News) that had to move its start because there was another small event competing with it — Texas A&M and Texas in their annual football love-fest. This race attracted nearly 15,000 in 2009, no slouch at all.

I raced the Dash and Dine (see logo, bottom) starting on the dot at 9:00 a.m. with both a five kilometer and a five-mile option northeast of the Twin Cities at the Chisago City Sportsman Club. All on paved roads, the temperature was a few ticks above zero as each start heads off simultaneously in opposite directions. Turning corners, facing the northwest winds was enough to get one thinking about picking up that “Wobble Gobble” gait to find the finish line just a little quicker. It is nice to recall by spring these temperatures will seem, if not warm, at least more comfortable . . . but not yet.

Anthony Peter, a champion at Adventure Sports races, did not lose his way on this somewhat rectangular five-mile loop. It would have been hard to do unlike his last race at the Halloween’s Great Pumpkin Chase on trails in Lake Elmo. He collected the first place prize — a turkey, like every event likely would have today — and commented, “I enjoyed the nice county road course.” Trailing his 28:17 win by less than two minutes was Brenden O’Flanagan racing his first in three months. “I felt great out there; I had a smile on my face.” 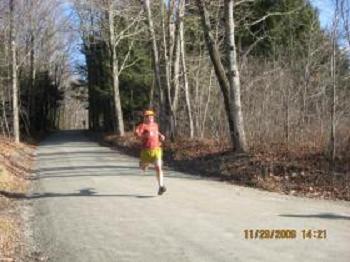 He commented that Anthony and he stayed locked for the first couple of miles until he decided to not push it, and Peter took off. Warming in the lodge, Anthony held his dog whose name resembles being comfortable as implied by living the Life of “Riley.”

Emily Prall, 25, won the frozen bird for the women with a 35:47 finish followed by 25-year-old Aileen Galatowitsch finishing with one of the youngest medalists of the day, 17-year-old John Galatowitsch along with Joseph Galatowitsch, gold medalist in the 50-59 class following the twosome across the finish seconds later.Then new mother, Andrea Vollrath of nearby Forest Lake finished with new father, Joe Jensen, in 41:46 and 47 respectively, holding the prize of the day in the Sportsman’s building — baby Adalyn all of eight months old.

“She’s celebrating her first Thanksgiving,” mom said in anticipation of the remainder of the day. Yes, I replied, and by definition, her first Christmas, too! Thankfully,  Andrea did not grab one of the turkeys and whack me on the head for that observation, I later learned the reason: Adalyn means “noble kind,” a nice characterization of the proud parents, too. Wearing her medal, she commented, “We do a lot of Vacation Sports races. My mom Mary watches the baby in the warmth of the truck when we’re on the course.”

In the 5 km, John Leaf’s 17:15 led Nathon Koster, visiting from Madison, Wisconson, by 32 seconds. Carol Bartz,42, won over the younger set, Rachel Dedeyn of Fort Collins, Colorado and Emily Fellow, also of Madison, by seven seconds and 29 seconds respectively for the best race of the day. Cam Raedeke, 69, won gold in her class for the day. In the five mile, the most senior racer Harvey Johnson won his class and beat many much younger across the finish.

In the third year of this race and though temperatures were down 30 degrees over 2009, participants were more than 30 stronger. The five mile option was just added this year.

And so you can race snowshoes on Thanksgiving weekend, Copper Mountain, Colorado, has its seventh Annual Gobbler Chase, a way to work off excess baggage post-feast, as the race shoes off on Saturday morning at 11:00 — before lunch! Where else can you get the “Best logo of  Thanksgiving,” a fit and happy turkey dressed in blue with a scarf, hat, sweater and earmuffs racing blue snowshoes. 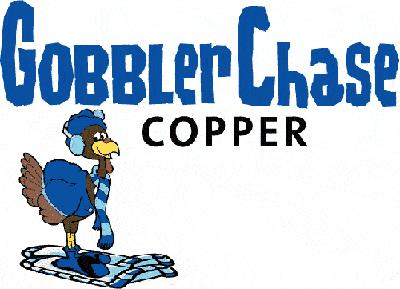 My favorite Thanksgiving race name? The Harmony for Ohio Turkey Trot. Why? Because I’ve just published the book titled “HARMONIZING: Keys to Living in the Song of Life.” What better keys to living happy and in a Harmonized way, with all of struggles that seem to try and trip us up like roots on the Sawtooth trails, than by running, racing and hanging with joyful people on trails, paths, and snow who just can’t seem to quit smiling.

Just in case you missed your Thanksgiving Day race, Colorado Springs had a Friday Turkey Trot 5k, on Saturday you can race the After Turkey Day Trot in Seattle with a 15 km option. Sunday has a morning Noodleini Run/Walk with another 15 km option and plenty of Noodles, too, from Noodles and Company in Depere, Wisconsin. Lastly, try the afternoon running of the 13th Annual Turkey Lane Turkey Trot in Hinesburg, Vermont (photo, finisher, 2009). Raising money for the Hinesburg Land Trust to buy more public lands, the start is at the only Turkey (Lane) Bridge I found.

Okay — what are the best Thanksgiving Day Races in the World? Those held by and run by our service women and men all over the globe, and particularly in the war zones like Afghanistan. For example, the Turkey Dan Run held at Camp Phoenix there featured Air Force, Army, Army Guard, and Marines. Parades with military vehicles outfitted as floats were reported at some bases.

More on Dash and Dine:
http://www.vacationsports.com/events.html

Thanks to the Colorado Runner online Calendar:
http://www.coloradorunnermag.com/

More on HARMONIZING: Keys to Living in the Song of Life
www.iHarmonizing.com 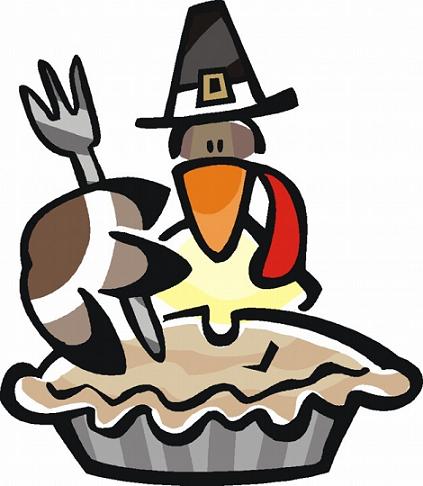