“Mastery is the natural result of mindfulness.” –Ron Kurtz

Trail running and snowshoeing have been in existence for centuries and both sports have experienced explosive growth in recent years. The complementary nature of these art forms provides an ideal off-season cross-training platform.

Mastering the essence of said sports is an ongoing process. The fusion of mind and body, art and science, through discipline requires mindful practice. It is this mind-body interface that often delineates effort from struggle.

The learning curve on snowshoes is approximately 50-100 meters. Its kinesiology is nothing more than a pronounced version of running. The ethereal aspects of snowshoeing will become evident soon after the learning curve.

The first order of business in one’s transition from trail runner to snow runner is the selection of snowshoes to meet your needs. Exhaustive research, rigorous testing, innovation, and technological advances have dramatically refined the gear, apparel, and accessories related to both sports.

Many snowshoes designed for running weigh per pair a mere two pounds and measure eight inches or less in width. The tapered ergonomic frames reduce drag and enhance flotation.

There are three primary techniques inherent to snow running that you must master in order to maximize your snowshoeing fitness and racing goals: climbing, descending, and traversing. Trail runners are familiar with these techniques save for the subtle differences in execution when the snow flies. 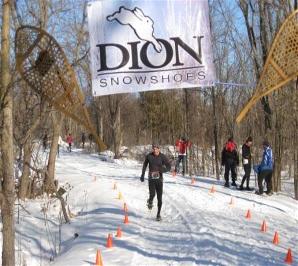 Shift your weight forward onto your front cleat to maximize traction on moderate climbs. Kick the cleat into the snow to mimic a mountaineer on steep climbs. Accentuate arm drive in both cases to complement breathing from your diaphragm.
Descending

Always think tail to tip. Press the tail of the snowshoe into the slope and roll forward until the femur passes under the hip. Do not contract the hip or pelvic region. Heighten the knee lift and draw the heart center backward to lift the spine away from the hips. Advanced techniques include bounding and leaping or riding the tail plant to mimic skiing or gliding.

Evert your foot position to the uphill on climbs to mitigate tail swim. Point the cleats straight down the slope while stomping the snowshoe for maximum traction when heading downhill.

Sponsored trail runner, snowshoe racer, and coach Derrick Spafford, stated that a shorter stride length and consistent cadence are vital during ascents. The difference in the sports lies in the descents.

Spafford advocates combining an aggressive mindset with gravity to facilitate your descent. “Don’t be afraid to increase your pace on the downhills. This can be very exhilarating and one of the most exciting parts of your race,” he said.

Snow running is an art. Allow the nuances of the foregoing techniques to radiate through your breath and postural awareness. Mastering these techniques will transcend your cross-training effort and pay dividends during the trail running season. 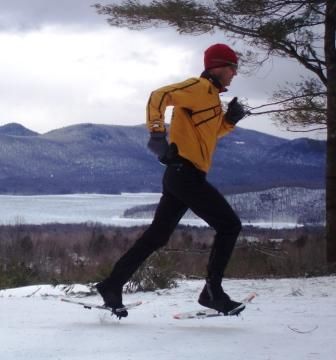 Contrary to popular belief the transition from trail runner to snow runner is often not as seamless as one would envision—especially for beginners. Sport snowshoeing demands input from more muscle groups, pulverizes lower body musculature, breeds new life to your hip flexors and extensors while your heart rate skyrockets. One can easily burn 500-1,000 calories per hour depending on terrain and related conditions.

The beauty of snows running as a cross-training application is its ability to expose biomechanical, psychological, physiologic, and kinesthetic weaknesses—even in the most proficient trail runner. Though both sports are running disciplines they are light years apart in the manner each moves across the earth.

Spafford emphasized the importance of understanding that when first making the transition to snowshoeing it will take considerably longer and more effort to cover the same distance than it will while trail running. A training log is useful but he recommended tracking time versus miles.

Ilg maintains that trail runners who implement snow running will reap a multitude of benefits that will empower their lives and trail running long after the snow has melted. He offers “3 Noble Truths” along the path of snow running. Read more about these “Truths” in his upcoming “Running on Water” column.

Sport snowshoeing is light both on your joints and the planet. This sport is about suppleness and finesse not rigidity and power. It is about humility not ego. Snow running is about flotation versus muscling through the snow. It is about releasing your expressive self versus conquering something. Think fluidity and freedom.  Think yin versus yang. Never fight the snow. 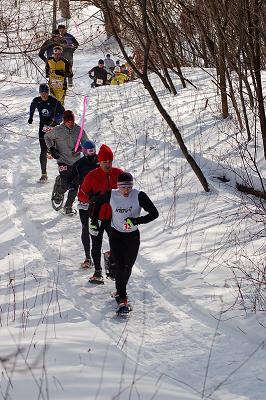 Snow running is about precision. Biomechanical rigidity or complacency will spell your snowshoeing demise in a heartbeat no matter your physical condition or amount of technologically-oriented equipment and gear. Immediate and consistent amplification of running biomechanics must implemented or else your snowshoe running endeavor will soon become a losing proposition. Mother Nature always prevails.
Core development

Yoga is the union of mind and body. The key to your snow running prowess lies within your core — physically and spiritually. Yoga and snowshoeing humble us and mercilessly attack our weakest links by design. Yoga and running require breath and postural awareness while dancing the precipice of pain. Yoga practice will unlock the pelvic region and open the doors to deeper, more refined training of your mind and stabilize your core. Allow your “True Nature” to flow through each footfall, arm swing, inhalation, and exhalation.

Discipline means learning. These running disciplines teach us a lot about ourselves. Trail running offers a magnitude of intrinsic and intangible rewards far beyond the scope of sport performance. Kinesthetic training is often overlooked as the key ingredient to athletic success — whether a podium finish or cultivating personal growth.

Mindful application of your physical, mental, and spiritual energy through snowshoeing will allow you to merge with the purity of trail running and take your sports performance and life to a higher level.

Discover the essence of running from a new perspective and learn more about yourself in the process. 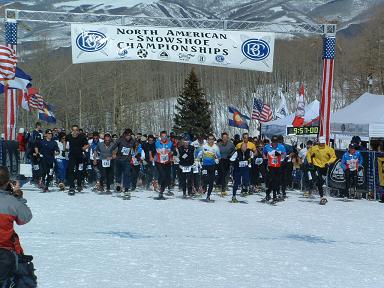