On February 27, 2010, over 250 snowshoers from around the world will gather on Vancouver’s Mount Seymour to celebrate the sport of snowshoeing by participating in the World Snowshoe Invitational. Held during the 2010 Olympic Games, it will be an amazing opportunity to showcase our sport on a global level. This event is part of Canada’s hugely popular Yeti snowshoe series and will double as the Canadian National Championship. But, what exactly is the Yeti? And how did it morph into an international event attracting elite athletes from at least 10 countries?

The Yeti Mountain Snowshoe Series has been around since 2001 when it was created by Marc Campbell, a mountain biker and adventure racer who was looking for a winter sport to provide off-season cross training. At that time snowshoeing hadn’t yet gained the popularity it enjoys today. Nonetheless, Campbell fell in love with the sport and welcomed the chance to introduce other people to this accessible and fun way to enjoy British Columbia’s stunning mountain landscapes in the winter. 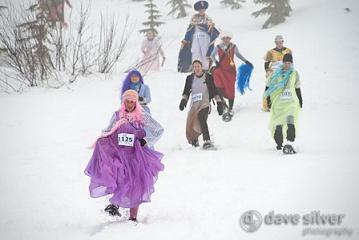 Enter Dave Howells who likewise was introduced to snowshoe running by a friend well before the sport started to gain popularity. Howells eventually entered one of the early Yeti races with a field of 30 to 40 competitors and finished in the top three. He had such a good time that he asked Campbell if he could help out. Since then, Campbell and Howells have been bringing their own distinct skills to the Yeti. Campbell manages the business, marketing and sponsorship side of the venture, while Howells is responsible for technical aspects such as course design and safety considerations.

The Yeti has become an annual race series that takes place on several of British Columbia’s most spectacular mountains. It is Western Canada’s only snowshoe race series and in 2010 is poised to set a new record for the biggest snowshoe race in the history of the sport in Canada. The Yeti alternates years with Eastern Canada’s Mad Trapper Snowshoe Series for the Canadian National Championships.

If all of this sounds like it must attract a field of very elite athletes, it does. But, Campbell and Howells are adamant that the Yeti is all about having fun and enjoying winter. They hold Thursday night drop-in clinics for snowshoers of all levels. The clinics and indeed the races themselves are accessible, fun and friendly events for all. It isn’t at all unusual to see snowshoers racing in costume. In fact, the Mount Washington race on Vancouver Island has a team of costumed “snow queens” who race the 5-kilometre course annually and this year are using the race as a fundraising initiative for a children’s charity. 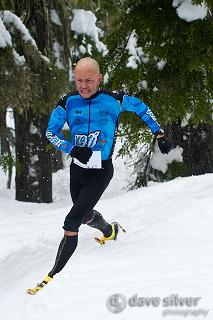 For 2010, the organizers have settled on two strategic locations for the Yeti races. The first Yeti of the season was held on Mount Washington which is known for its rolling course and great snow conditions. Some snowshoers will view Mount Washington as a training ground for the World Snowshoe Invitational which will be held a month later on Mount Seymour’s scenic slopes. Snowshoers can register for the 5 or 10 kilometre race on Seymour, but only the 10 kilometre qualifies for the Canadian National Championship or the Worlds.

Campbell and Howells hope that by holding the World Snowshoe Invitational during the 2010 Winter Olympics, they will expose the sport of snowshoeing like never before. There is a built-in contingent of media in the area for the Olympics and the hope is that the news will trickle through to them and the International Olympic Committee. It doesn’t hurt that a handful of former Olympians have expressed interest in the race and plan to participate.

Of course it isn’t far from the organizers’ minds that snowshoe running could some day be accepted as an Olympic sport, although they are well aware that there is a long and rigorous process that must occur before this can happen. When asked their greatest hope for the outcome of the World Snowshoe Invitational, Dave Howells says “It would be great if people would some day look back on this race and see it as a turning point for the sport of snowshoeing.” With the high level of interest and excitement surrounding this event, the organizers could very well get their wish.

For more information on The Yeti Snowshoe Series and the World Snowshoe Invitational, visit www.theyeti.ca. 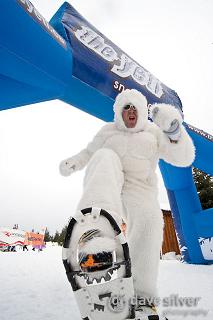