Barb Van Skike  (see photo right) gave snowshoer racers a beautiful gift on the 20th and final year of the Northwoods Snowshoe Championships . . . Beautiful weather! After a couple of years without snow and a few with incredible cold and wind, today was as perfect of a day as Gitchee Gumee could provide as temperatures tempered a mild 30(F) combining with azure blue skies hovering over white-iced Lake Superior.

USSSA two-time National Champion Greg Hexum, racing his home course, sizzled the snow with a 42:27, winning with ease, reflecting the injuries of the past are just that. Greg told me, “The Northwoods race was, as is often the case with snowshoe races, very different from Rib Lake.  The temperatures were near 30, turning any tracked trail into sugar.  This, of course, makes things more challeging and somewhat slower.  That said, the course was in good shape—except where the marathoners and half marathoners had preceded us.

I have always enjoyed the Northwoods race for its camraderie and its challenge.  As the course rises from its start near Lake Superior, it climbs steadily until 5k.  The return trip is obviously, then, downhill.  I have found this good preparation for the championship style races that are often hosted as ski resorts—featuring long climbs and descents.

While the Northwoods race is ending, I believe that a new race will emerge in Duluth for 2011.  The city has abundant trails and a very active winter population.  I have encouraged a few of the experienced local organizers to start a new tradition!”
Throughout the USSSA Calendar one can observe top performances at the front, like this one, indicating the Ten Year National Championship Race in Syracuse, NY, March 6, will be the most competitive of them all, a special year for many reasons.

The best race was for second place as David Hyopponen, 49:07, edged Rob Class by a few ticks, giving Rob his third 3rd-place finish in as many races, establishing himself as a factor in the 45-50 group at the Nationals.

All of the top ten finishers of the day clipped the clock under one hour, no easy task on this roly-poly layout with its twists and turns, including the number one woman finisher, Kristin Miller. Winning her first three snowshoe races, including her second Qualifier, Kristin is enjoying a sensational return to the sport. Emi Yasaka took second, also under 60 minutes, with Amanda Lepisto narrowly edging Meg  Rubesch for the third woman overall.

And forever, the youngest racer of the day, 12 year old Caytlin Neuberger, will have the honor of being the last finisher of the 71 entrants in this race, the last Northwoods 10km USSSA Qualifier. 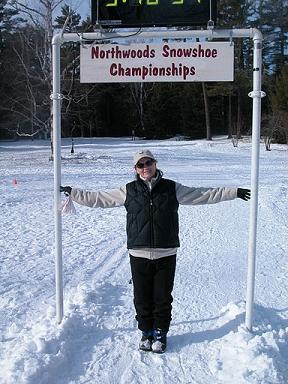 Jim McDonell, Braveheart Snowshoe Series Director, racing the half-marathon, said the course was “Tough and beautiful. The snow on the half and marathon was sugary and uneven, sucking the energy right out of you. This is real snowshoeing! I savored every moment knowing it was the last Northwoods. I especially lingered over the ‘no charge’ sign with the view of Lake Superior from on high after the long climb.”

Winning the half-marathon was Gregg Robertson with 2:03:00, a phenom time. Effervescent Lisa Trainor won first female, finishing at 2:41:26. Note that 68 entrants raced this distance almost the same numbers as the 10km, showing the growing popularity of longer snowshoe races.

The marathon distance for this event is completing the half-marathon course twice. Why not just say, ‘two loops?” The marathon is not only a test of distance and physical endurance here, but really tries one’s mental powers as the half-marathon trips by the finish twice. Therefore, the full distance will bring you by that finishing line spot — and the opportunity to get out, drop out, and stop — multiple times, so if one isn’t prepared, the siren song of the comfort of the car can be overwhelming, pulling the racer in like metal to a magnet. 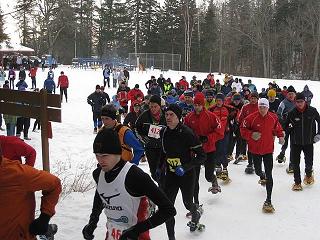 Ultra Distance master, Allan Holtz, noted, “This was the seventh time I ran this marathon. This event is a favorite for me for many reasons. Due to the potential variation in temperature and snow conditions from one year to the next, this race is unique each year and will show more variation in finish time than any other venue. The challenge of the event due to the toughness of running that far in snowshoes over varied hilly terrain that includes steep climbs and descents of loose snow to the faster hard-packed cross country ski trails combined with the great quiet scenic beauty of the course drew me back each year. It is more like an ultra than a traditional marathon.”

All realize that Samuel Darling’s 4:24:13 overall win and Lynn Saari’s first female 6:28:27 are substantial accomplishments along with the other 26 who finished this marathon for the last time. Event record holder, Rick Cleary, added another marathon finish to his list — now his 4:00:55 is safely retired — while daughter, Mollie, raced the 10km. Snowshoeing is one of the best possible family sports, particularly when multiple distances are available to attempt like Northwoods.  The results reflect that popularity as Jim McDonell counted some 23 families on today’s finishers list. 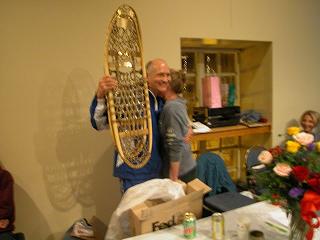 The awards are celebrated at the Fitgers Hotel, a historic site in Duluth; this year’s party had all of the earmarks of a classic itself as not only were awards and prizes given to participants, but also a special tribute was made for Barb Van Skike. Jim McDonell teamed up with Snowshoe Magazine and together with a dozen or so donors awarded Barb the “Dream Catcher” wooden snowshoes (see photo above) from the Theriaults in Maine (see article). Specially made, these snowshoes had several plaques attached to celebrate and memorialize the occasion. “Barb hugged me and cried when I gave her the snowshoes. She said it was especially touching because she had a special place in her heart for Native Americans. We did good!”

Barb also was awarded a commemorative plaque by snowshoers and a bouquet of rose.

Bob Rusch was recognized for racing all 20 marathons from 1991-2010 with a handcrafted quilt Barb created by using each year’s finisher shirts. Bob commented, “Just an endearing event! She did a great deal to develop the sport. She worked tirelessly, and we all owe her a great debt.”

The night also enjoyed a huge raffle with lots of participation. Two pair of Altas Snowshoes were awarded in the drawing along with lots of pizza, beer, pop, water to satisfy hunger and thirst. The crowd was raucous and full of energy and camaraderie. “I don’t think anybody wanted the night to end.”

With a sense of sadness, but with a host of memories, the Northwoods Snowshoe Championships crosses through its own finish trestle. Al Holtz said it best , “The great organization and dedication of Barb was greatly appreciated. This race will be missed.” 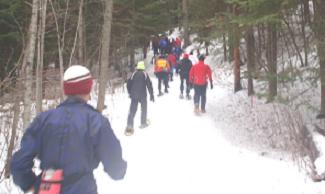