Aiming to top last year’s 3,600 participants and more than $250K contributed to the Susan G. Komen for the Cure foundation, the Tubbs Romp to Stomp Out Breast Cancer Snowshoe Series is lining up five events in five states for 2009, including its first ever event in New Jersey, the Garden State. Anticipating another successful season, 2009 will mark Tubbs’ donation of more than a million dollars to the fight against breast cancer.

The Romp to Stomp is a fun 3K or 5K Snowshoes benefit walk featuring free snowshoe demos, tons of prizes, raffles and a grand prize that will be awarded to the single largest individual fundraiser.  The cost for online pre-registration is $25 per person, and on site registration is $30. Both individual and team registrations are welcome.

“The Romp to Stomp Out Breast Cancer is a fabulous excuse to get outdoors in the middle of winter and raise money for a great cause at the same time,” said Alyson Ruby, captain of Romp to Stomp team P-Ruby and a past series top fundraiser. “I didn’t really know what to expect when I became involved with the event in 2004 as a person who was very new to the sport of snowshoeing and had only recently become a part of a family battling breast cancer. Over the past two years as my family’s battle became bigger so did our team and our donations. It has been, and will continue to be, an honor to be a part of this wonderful event.” 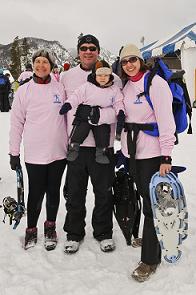 For more information on the Tubbs Romp to Stomp Out Breast Cancer Snowshoe Series, visit www.tubbsromptostomp.com.

***The following advertorial was paid for by Tubbs Snowshoes*** 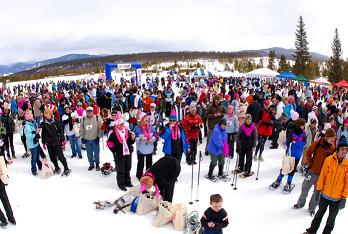