After one of the coldest Januarys on record (a stretch of 30 days with no temperatures above freezing), the Arctic ran out of frigid air and suddenly, just days before the start of the 2009 Snowshoe Shuffle, a spring thaw began . . . and Spring in Minnesota is weeks and weeks away. Sometimes it seems to arrive just before the 4th of July. South facing hills went bare of the 37” of snow that had fallen early in the year, putting in jeopardy the new date the race had chosen for earlier in the season, in order to get away from this annual threat when the race was held on the last weekend of USSSA Qualifying.

But the Long Lake Park Reserve held its snow and racers were treated to a terrific course and mild 32 degree temps at the start, warming even more with the sun popping out during the race. This new date also eliminates the race’s conflict with the largest Cross Country Ski Race, the Birkie, held in neighboring Hayward, Wisconsin so the numbers were up for the 2009 Shuffle. Kathy Jurichko, a key volunteer, said, “We’re very gratified with the strong response to our race this year!”

As is its tradition, the race started right on time at 10:00 A.M. A combined group race of the 5km snowshoers and the 10km participants headed enmass for the big squeeze as the track narrows to a single way about 100 yards to get into the woods; being at the front pays off. Someone quipped, “This is like trying to merge onto (Interstate) 694 during rush hour,” a reference that could match any number of freeways in the Twin Cities. 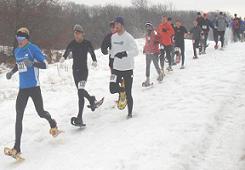 Today’s race was destined to be special as boarding the shuttle from the auxiliary parking area, I sat down next to Bob Durband who showed me the taping job he does on the bottoms of his snowshoes for crusty snow like today’s (see picture). Then, in what would be the mantra for the day, he said, “Did you know Cindy Brochman is here? I talked with her when I got my registration pack before parking down here.”

Cindy Brochman, 2007 Snowshoe Magazine’s Person of the Year, Race Director for the 2007 National Championship Race held in Minnesota, perennial National Championship Team member, had announced a few months ago that she was beginning a chemo battle. And how would she celebrate an interim break in that vicious therapy? By racing the 10km Snowshoe Shuffle USSSA Qualifier, finishing second in her class, with husband, Kevin, and showing off to everyone her new bald look . . . and what a beautiful sight it was. Jim McDonell, known as Mr. Braveheart in the region, said, “She had a smile beaming from ear to ear. She is a very positive person and an inspiration to us all.” 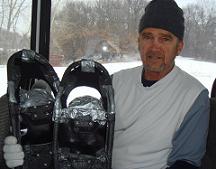 Just having her here to race with all today no doubt boosted her spirits – you could see it in her eyes. But the lift she gave to all who know and admire her for the grit and determination required to do this was incalculable. It made us all appreciate even more the opportunity to be in the beauty of the outdoors, racing along on snow, breathing the fresh air, being with those who enjoy the same experience.

The race course, the same layout as 2008’s, is lots of fun . . . plenty of variety in each of the two loops required to complete the 10km. From crossing railroad tracks a half dozen times as you bob in and out of the single track, up and down embankments, and skirt Long Lake’s ice by racing through the reeds, plenty of strategy can be used if you are trying to pass or keep from being passed.

Brad Canham, racer from the Western Suburbs (see picture, above, blue jacket), gave me this detailed report on the two loops:

“The first loop, snow conditions on the single track: the snow was packed in wooded sections making for excellent traction. However, passing a racer meant blowing through the 12 inches of loose snow outside the hard pack track. During the lake portion of the race snow condition was a bit looser with 1-2 inch sandy snow. Some slush for a 20 foot stretch, but generally hard pack with a loose cap on top.

Open field areas made for a little bit of tricky footing as the overall firmness of the single track was not as well established as the wooded areas, so there was some lateral sliding around. The goal is to pick up on that firm line of snow pack to maintain momentum. Often times you find it for ten feet and then it disappears and the snowshoe slides sideways, and it’s back to looking for that firm line.

By the second loop, even in wooded sections, the single track snow got churned up a bit to about one inch of sandy snow even as the temp tipping above 32F.

The final 100-yard dash to the finish line was several inches of churned loose snow on top of the snowbase. This was a true test of snowshoe grit for racers digging for an extra ten seconds off their time, or racing mano-a-mano to the finish line.”

There was no race at the win today as Scott Gall, Iowa, (see photo, below, red USSSA National Jersey) led from the get-go for the entire distance, finishing the race in a blistering 41:06, with noted Olympic marathon qualifying competitor, Kelly Mortenson, St Paul, crossing next at 42:55.

One of the top five finishers failed to make the forficate turn at the 5km mark for the second loop and continued to the 5km finish line where he was directed back to the course by going down and up an embankment. I was taking the trail race photos just after the split so anyone who came up the trail had to be a 10km. I saw the racer not turn and then head for the finish; I thought he was winning the 5km. The next racer to pass me I said, “You’re number three.” Well, if whoever-that-was finished fourth and wondered why someone would’ve said ‘three,’ this is the story of the confession – and confusion

Several USSSA National Medalists like Jim Graupner and Jim McDonell finished under one hour as did a total of 14 men. Josh Boyd, Apple Valley, #14, eked out a 59:56.

A lot of new names showed up in the women’s race. Erin Ward, St Paul, led a group of six women in the class to a sub-one hour finish with 52:14. A race for second followed with Rebecca O’Hean, Baxter, crossing at 57:22, about 22 ticks ahead of Lindsey Molstad, Duluth. Lindsey Hoeft, Minneapolis, was the last to make the line under 60 minutes.

Last year’s to-be-married couple, now known as Mr. and Mrs. Chris Kinner, came back to celebrate their first year anniversary of snowshoe racing – and marriage. Chris followed wife, Page, across the line in 1:16.

The biggest group so far, as Ben Zhao, Edina, nailed the finish in 27:06, beating out 2008’s winner Tim Zbikowski, Maple Grove, the only two men to break 30 minutes on this course. Tim and Carol Klitzke (winning her class today) were instrumental in the 2007 Minneapolis National USSSA Championships in working with Cynthia Brochman. Their home was converted to a warehouse staging area for the boxes of materials that are required for these events. Meeting wonderful and kind people like Tim and Carol, and Cindy, among all of the people of snowshoeing, is the victory that we all win whether or not a medal is received or not. There’s something about racing in the snow that brings out the nicest of people.

The women’s 5km was the largest group today with 88 finishers. I know from talking with many in both groups of the 5km racers this was their first snowshoe event and for some, their first time on snowshoes. Such events like the Snowshoe Shuffle, other USSSA Qualifiers, and the myriad of regional snowshoe races and events through the country continue to introduce many to exciting world of snowshoe racing.

As usual, the good folks at Hangar 51 Software provided their VIRA results of the races today and had them online within hours of the finish. Go to www.myvira.com and select the Snowshoe Shuffle, 2009. The format gives plenty of detail on each competitor.

How was your experience at the Snowshoe Shuffle? Let me know at: phillipgary@snowshoemag.com. 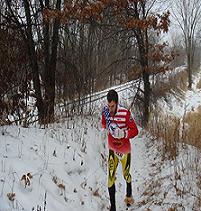