To qualify for the Championship race (see photo, right) a snowshoer is a member (or joins, of course) the United States Snowshoe Association — the country’s best sports bargain — and races at one of the season’s 21 Qualifiers scattered from Coast-to-Coast . . . and beyond.

Here are highlights of the upcoming season.

The USSSA map shows a new wrinkle this year as each of the four major divisions – Western, Rocky Mountain, North Central, and Northeast – has five qualifiers making up their schedule. Added to the list is the Alaskan Regional consisting of the only race now in that state, the Fairbanks Snowshoe Classic.

This qualifier gained notoriety by providing two medalists at the 2007 Championship race in Minneapolis and winning the unofficial ‘longest travel’ award to make it to the event. Although Alaska (see photo, bottom) is typically the coldest race of the year, the 2008 qualifier at the Northwoods Snowshoe Championships, Duluth, MN, was a downright chilly -22 (F) at the start  and had a good stiff wind to make sure one didn’t start to get too comfortable.

The Rocky Mountain Region has the honor this year of kicking off the 2009 race season — while still in 2008! Pazzo’s Eagle-Vail Holiday Snowshoe Races, at the Eagle-Vail Pavillion, Colorado,  will be held on December 27th, a perfect way to celebrate the day-after-the-day-after Christmas. The one who doesn’t eat too many sugar plums on Christmas Day may have a real advantage.

It is about time snowshoe racing gets in the mix for the activity schedule for these holidays; the Holiday Snowshoe Races understands this and  wins this column’s ‘Best Race Date’ award. 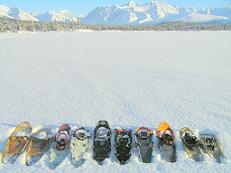 Now, who will have the fortitude to schedule a race on New Year’s Day? Well, Rib Lake, Wisconsin, comes close with their Rib Lake Snowshoe Adventure, Westboro, Wisconsin, to be competed on January 3rd.  For the 2008 season, the first qualifier of the year and the first for this organization, at www.skiriblake.com, opened the season. Looking ahead, in 2010 their date will be January 2nd. That should be an interesting start. (photo, right)

For the Rocky Mountain Region the end of January will see four of their five qualifiers completed. If you don’t make it to one of these, your last chance in the region is the Gold Run Swift Skedaddle out of Breckenridge, Colorado, on February 23rd.

The North Central Region almost gets all of its racing done in January, with competitions on each January weekend except the second of the year. The big change this year is the Twin Cities Snowshoe Shuffle moves to its new date to early February, the 7th, from its traditional last day of qualifying it shared with Alaska and Breckendridge.  Ruth Ann Weiss, East Side Neighborhood Services Director, beneficiary organization of the race, said that the challenging snow conditions approaching March made such a move prudent and more exciting for the snowshoers.

The Western Region doesn’t get its first race on the map until January 17th at the Grand Teton Race in Idaho Falls, Idaho . . .but what  a start. The region has the biggest weekend of the racing year with two more events on Sunday, January 18th, at the Kahtoola Flagstaff, Arizona challenge and a preview of the National Championship at the White River Snowshoe Race on Mount Hood, in Lake Oswego, Oregon. Even though a different course than the Championship Race, getting a race in on Mt. Hood has to be a real advantage for those who can make it.

The region completes its season the following Sunday at the zesty Jazz Trax Snowshoe Stomp in California, that state’s first appearance on the calendar.

Kicking off the North East Regional Events is the Mendon Ponds Winterfest on the busiest snowshoe weekend of the season – January 17th and 18th with five races in three regions. Wow, what a weekend. If my memory hasn’t become too frozen from spending way too much time on snowshoes (wait a second – is there such a thing as ‘too much time on snowshoes’??), this same weekend during the 2008 Qualifying season was also the busiest of the year. The NE Region calendar gets jammed with two races on the weekend of February 7-8, and two more on February 14th. What better way to celebrate Valentine’s Day but to show your love of . . . snowshoeing? Of course! Keeping healthy and enjoying all the benefits of a snowshoe workout – like firming up a little, getting rid of what is gingerly termed ‘excess’ body fat – now that’s true love.

Then, on March 8, 2009, with 21 qualifiers completed in their entirety (Blackjack!), all will gather as the world’s snowshoeing eyes are on Mt. Hood, Oregon, for the 9th Annual USSSA Championship, offering a chance to dethrone the fleet Josiah Middaugh, Vail Colorado, and Keri Nelson, Grand Junction, Colorado, as the 2008 Snowshoe King and Queen, Champions of the Snowshoe World.

As the sport continues to grow here and globally (note the new International Amateur Snowshoeing Federation at www.internationalsnowshoeracing.com ) these Championships are becoming more and more valuable and noticed in national media.
Don’t worry . . . Snowshoe Magazine is committed to helping our favorite activity get the recognition it deserves . . . read about your race and the results at our online site and through our publication. Subscribe online. Then you can do your part by joining and participating in USSSA National Qualifiers and other snowshoe events throughout the country, enjoying the fastest growing winter sport around.

phillip gary smith writes about snowshoeing from his home in Minneapolis, Minnesota, USA. Author of Ultra Superior, the book (www.ultrasuperior.com) he is completing a new book titled “Harmonizing: 88 Keys To Living In The Song Of Life.”