The Special Olympics Athlete’s Oath is “Let me win, but if I cannot win, let me be brave in the attempt.” In the case of snowshoe athlete Hazen Meade, this bravery is complemented by strong doses of commitment, focus, perseverance and sheer hard work. On February 26, Hazen, who lives in Campbell River on British Columbia’s Vancouver Island, will be travelling to Quebec City with Team B.C. to compete in snowshoeing at the 2008 Special Olympics Canada Winter Games. 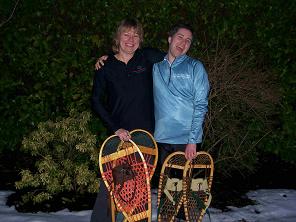 This will be Hazen Meade’s second National Games. Four years ago in Prince Edward Island, he was leading his 400-meter snowshoe heat and fell 5 feet before the finish line. He got up, finished the race and won a Bronze, narrowly missing a spot on the National Team. A heartbreaking scenario, but Hazen is positive and philosophical about it. In his own words, “at least I finished the race”, and describes the entire experience in glowing terms – the chance to meet new friends, the sense of adventure and the opportunity to travel. In other words, back to the Athlete’s Oath – winning is nice but it isn’t everything.

Whether he ends up coming home with a medal or not, Hazen is justifiably very excited that he has qualified to compete in Quebec City. In fact, when he isn’t training for the Games or working at one of two jobs, Hazen is busy teaching himself to speak French in order to better communicate while in Quebec. Hazen personifies what volunteer coach Maureen Brinson describes as “the abilities, not the disabilities our athletes have”. Hazen trains five to six times a week incorporating running, swimming and floor hockey into his workouts. He especially enjoys weekend snowshoe runs on the slopes of Vancouver Island’s Mt. Washington. A typical training session on snowshoes will involve a warm-up, distance running, speed drills and skill development followed by stretches to cool down. Hazen is proud of the progress he has made and feels he is in very good shape for the Nationals. 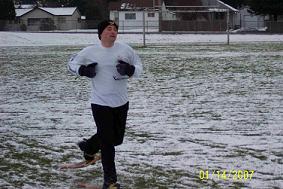 After 24 years of involvement with Special Olympics, it’s not surprising that Maureen Brinson has a lot to say about snowshoeing, coaching and her experiences with Special Olympics. Her favorite snowshoes were handmade by her uncle in Newfoundland, Eric Brinson, and have travelled with her to all major competitions including P.E.I. and the World Games in Japan. Rest assured those snowshoes will be making the trip to Quebec City. Maureen’s husband Harvey Hunter was a key player in bringing snowshoeing to the 1997 World Games, and got Maureen involved with coaching snowshoeing. Currently seven snowshoe athletes in Campbell River train regularly with Maureen and Harvey. Maureen says “it is the day-to-day accomplishments of the athletes that keep me motivated”. She has watched Hazen “develop from a person who could barely run 200 meters, to an athlete who can complete the 1500-meter in 8 minutes. Having the privilege to coach an athlete like Hazen is one of the main reasons Harvey and I keep coaching.”

When stating his snowshoeing goals for the 2008 Special Olympics Canada Winter Games, first and foremost Hazen Meade plans to “try (his) very best”. A worthy goal for snowshoeing, competing and life in general. Best of luck, Hazen.

To read about the 2008 Special Olympics Canada Winter Games: http://www.osquebec2008.com. 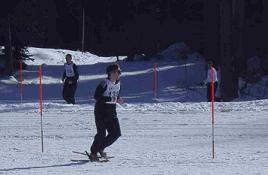