Gros Morne National Park in western Newfoundland is a snowshoer’s paradise. Canada’s eastern-most province is home to this majestic park that received international recognition in 1987. Twenty years ago, the United Nations Educational, Scientific, and Cultural Organization (UNESCO) declared Gros Morne a World Heritage Site, honoring its complex geology and remarkable scenery. And it is that remarkable scenery that will remind you again and again how splendid this island province really is. If you prefer the solitude of winter and breathtaking terrain, a visit to Gros Morne is a must.

Gros Morne is not only the name of the national park, but also the highest point within the park: Gros Morne Mountain at just over 2,600 feet. This is also a few feet shy of being the highest point on the entire island of Newfoundland. The term Gros Morne harkens back to the turn of the previous century when French still fished the local waters. Gros means big, and Morne is a Creole word for a rounded mountain standing apart from other hills. However, Morne can also mean “big isolated hill,” which seems more appropriate when nasty weather sets it. 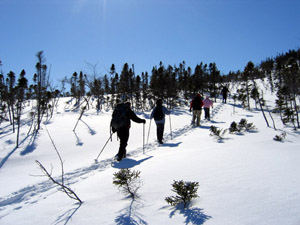 Averaging about 150 to 180 inches of snow annually, this magnificent park offers more than 60 miles of trails ranging from half-hour strolls to strenuous workouts. One thing is for certain: in the dead of winter, no matter what trail you choose, the serenity and solitude will be matched only by the picturesque surroundings. For example, Lookout Trail begins just outside the doors of the Discovery Center at Woody Point. The three-mile (round trip) trail rises to the summit of Partridgeberry Hill, which offers the best panoramic view of Bonne Bay and the Tablelands. You’ll want to stop at regular intervals for two reasons: The climb is extremely steep, and the views behind you are stunning.

Other trails that are worth consideration include Southeast Brook Falls and the Lighthouse Trail on Cow Head Peninsula. Southeast Brook Falls is an easy, pretty snowshoe route. There’s a good chance you will see either caribou or moose, as wildlife is abundant throughout the park. Lighthouse Trail is also a fun and scenic trail. You’ll pass Big Hill, which offers a great view of the surrounding area, including the Gulf of St. Lawrence. Snowshoers will also see three graveyards and an abandoned lighthouse (fog beacons, as they’re called in Newfoundland), which lends its namesake for the trail. 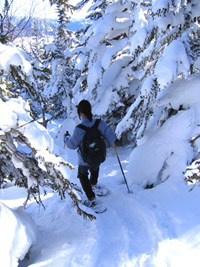 Wintertime is the best time to experience the Northern Lights. Unlike other parts of the globe that advertise the number of days the sun shines, a selling point in Newfoundland is the number of nights the Northern Lights are visible; some suggesting as many as 240. This most spectacular of light shows features dancing colors across the sky, including a combination of ever-changing pinks, greens, reds, and purples.

If you’re a first-time visitor to Gros Morne — and everyone is at one point — it’s best to use the services of a guide. One highly recommended company that’s been in business for 15 years in Scott Walking Adventures.

According to company owner and president Angela Chisolm, Scott Walking Adventures offers a variety of custom walking and hiking vacations, from British Columbia to Scotland, and all the way to Australia. “It was natural that we added snowshoeing to our offering,” she said. 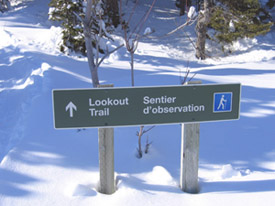 In addition to the wonders of winter on snowshoes, a Gros Morne adventure would not be complete without communing with the locals. It can be a colorful adventure just talking with them, as thick accents sometimes offer challenges in the comprehension department. The sport of curling, which gained lots of exposure during the recent Winter Olympic Games, is something that should also be on your agenda while visiting Newfoundland. Gliding a 42-pound stone down the ice is no easy feat, and the local curling club aficionados will readily offer their expertise and assistance.

The local fare is also something to experience. A traditional meal is the Newfoundland Jigg’s Dinner, comparable to corned beef and cabbage, and features pea pudding, which is cooked in a tightly knit cloth bag.

Wendy Scott, the founder of Scott Walking Adventures, once said that taking nature lovers into the wilderness was her magnificent obsession. For nature lovers who prefer a winter setting, a visit to Gros Morne National Park will be a highlight of your trekking adventures. In March 2008, Scott Walking Tours offers another snowshoe adventure to Gros Morne. To explore the details, visit http://www.scottwalking.com. 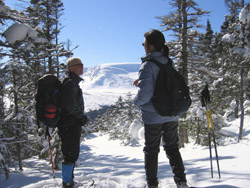