This is dedication. Becky Harman and Aaron Robertson have flown halfway across the world to run 6.8 kilometers on snowshoes. They arrive on Friday afternoon. They spend Saturday dealing with things like jetlag, altitude adjustment, and figuring out exactly where they are. On Sunday, they run the race, and then shuttle across Austria again in order to catch a Monday morning flight. They’re accompanied by the United States Snowshoe Association coach, Mark Elmore, who has made all this – oh, let’s just call it what it is – craziness happen.

The occasion that generates all this enthusiasm and distance? It’s the Dachstein Xtreme. This is a new event, tacked on to a mountaineering race. It’s easy to dismiss it as an afterthought, but the organizer, Karl Posch, has boundless enthusiasm for his inaugural event. It’s small, there are only 21 competitors, but there’s a decent international showing. In addition to our Americans, there are Finns, Swiss, Italians, Germans, and Austrians (of course). There’s a fair showing of the press, too, the local papers are there and an Austrian television station. 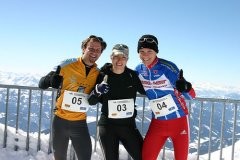 The race takes place at 2,700 meters on the Dachstein glacier. It’s a brutal course, in spite of the fact that it’s been trimmed a little, removing 200 meters out of the worst climb and taking a little bite out of the distance. Everyone seems flustered by the altitude.

The course goes downhill for a short stretch, then up long slow grade, then out on to a wide loop on the plateau. Finally, there’s the big climb, a steep gain to leave almost everyone breathless at this altitude, and another shorter climb back to the gate. It’s not an easy course at low altitude, but up here, it’s a whole lot harder.

But there’s good cheer all around. These runners are the first to do this course and the weather is unbeatable. The sky is Kodakchrome blue and it’s easy to imagine you can see all the way to Italy. There is no wind and the temperature is somewhere around a balmy 40F. It’s a perfect day. 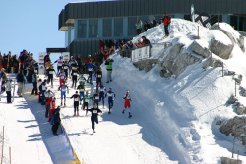 The pack opens up right out of the gate. Becky is towards the back, but her pace is strong and by the tine she’s heading up the hill, she’s left many of the other runners behind. The Italians are way up in front – this is their sport and they are making short work of the course. Their women’s champion, Daniele Cappelletti looks strong and relaxed even on the steep climb. 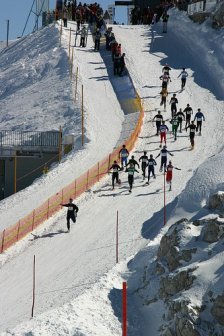 Because the race is so small, after it’s over there’s plenty of time to talk with almost everyone. There’s gear talk, of course – who’s wearing what and how much does it weigh? Mark is very popular; the European racers want to know what kind of events they could be attending in the U.S. The Italians invite everyone to Ciaspolada. The Atlas Snow-Shoe representative wants to know who’s coming to Dusseldorf for an early season race on artificial snow.

The Americans have one more race and then the season is over. That’s why they haven’t taken more time – the Nationals are the weekend following this race. They don’t seem disappointed about the brevity of their trip, though. Second and fifth are excellent souvenirs, and second comes with enough prize money to buy dinner in Salzburg the night before the team flies home.