Saturday Feb. 12 marked the third race of the season in the Beaver Creek Snowshoe Adventure Series. Truly, this race took the words adventure and snowshoeing to a whole new level.

Rumor has it that the previous race turned in too many “good finish times,” so someone decided to step-up the difficulty level just a bit. I missed the second race due to a knee injury, so I can’t vouch for its difficulty level or lack thereof, but I know that if it was anything like the first race of the series, easy is not the word I would have used to describe it. Challenging, both mentally and physically, is the best way for me to sum up the Beaver Creek series…but one of the most enjoyable experiences I’ve been privileged to be a part of.

In an attempt to keep the chaos to a minimum, it was decided this race would start at the top of McCoy Park, rather than near the base of the mountain as the first three races were intended to be held. What a perfect choice. The weather, while a bit brisk and not quite as sunny as I like, still allowed for the most magnificent views atop the mountain near the Strawberry Express chair lift. Eager snowshoers mingled around the start line, stretching and chatting with fellow competitors as they waited for the race to begin. Finally it was time for the 10K and the 5K races to begin.

The race started at the top of McCoy Park and immediately descended down through the trees and parts of the ski terrain. Heading down that first part of the trail I heard more whooping and hollering than I’d ever heard in a competitive race. The snow was so deep and powdery in some areas that the real challenge was how to remain standing while traversing down the hill. Snowshoes were flying everywhere as we slipped and slid our way down the mountain; being careful not to come into direct contact with any of the many trees along the path. Once I was able to get into a rhythm of traversing down the mountain, I found myself having more fun on snowshoes than ever before. The key was to keep your balance just slightly backwards and use the full range of the snowshoe to slide one after the other down the trail…catching an Aspen tree every couple feet to slow down the pace wasn’t a bad idea either.

We continued this way for quite some time, every so often exiting out into the open terrain and experiencing a moment of brief reprieve from powdered mayhem with a few steps on hard packed snow. I remember thinking to myself after some time that I noticed the race had been going downhill for quite awhile…which means only one thing.

If we’re going to get back to the same start line there was going to be a grueling uphill climb to the finish. And just as those thoughts were scrambling through my brain, I looked ahead to see a few of my comrades beginning a slow ascent uphill. At first you could only see about 50 yards ahead, which is typically a good thing because it means there might be a reprieve ahead. It was not to be in this case. I reached the end of the 50 yards I had been able to see and realized we turned a sharp corner to the left and what I saw next nearly knocked my shoes off. It was straight up hill from here on out. But with my competitive spirit in peak condition and my motivation to finish the race in better position than my previous 49th place finish, I stuck my head down and drilled on forward.

Gathering inspiration from one of my favorite athletes, Lance Armstrong, I knew that my best chance of finishing the race with a decent time would mean keeping steady and picking off one competitor at a time. In theory that sounds easy, but when a 45 degree angled snow packed hill stands before you, the task of carrying it out becomes a bit more difficult. But true to form as being one of the best things about snowshoe races, I was urged on with encouragement and shouts of “keep it up” from the few competitors I was able to surpass. It’s almost as if it’s a group effort out there…occasionally one person leads and helps to set the pace and then one by one, others take over the lead. And this was my time.

After the grueling uphill climb came to the peak just before you head down into the finish line, I was surprised by the sudden burst of energy I felt in my legs. Nearly an hour and 10 minutes had passed since the start, my legs burned and my shirt was soaked with sweat, but the exhilaration of standing atop the mountain on my way to the finish line was indescribable.

I cruised down the small hill and could see the finish line just 25 yards ahead. My fiancé, Brent Eggers and the publisher of Snowshoe Magazine, Ryan Alford, cheered from either side of the Finish line yelling for me to give it my all. Not knowing why, but I pumped my fists in the air, spread a smile wide across my face and gave it one last burst of energy through the finish line. This time, I finished 22nd overall in the 5K Women’s event.

I may never finish in first place, but I proved to myself that where there’s a will…there’s definitely a way. 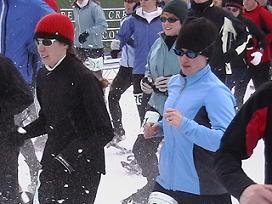