In any type of training or instruction, a teacher first asks him or herself, “What is it I want my students to learn?” So, they establish an objective that would identify what it is they want students to be able to do when they are finished with training. This would be the learning outcome. The most obvious objective in learning to snowshoe would be for someone to acquire the skill of walking on snowshoes. 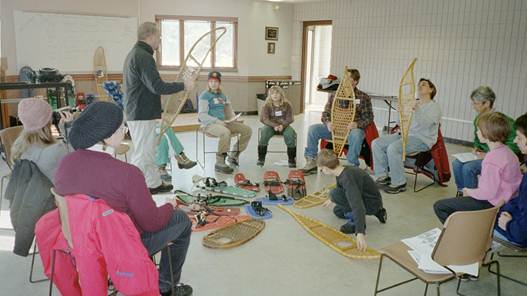 The next step is to select activities or lessons that will help to meet your objective. If your intended outcome would be that students be able to ascend a hill on snowshoes, you would want to come up with a method to teach the skill of snowshoeing uphill. In this case, you might demonstrate how to side-step, kick-step or do a herringbone-step up a hill, followed by having them mimic each of the steps with you. They learn the new skill by way of observation and modeling.

-Hands-on to learning about snowshoes-

Trying to come up with instructional methods is half the fun of teaching others. It’s an opportunity to use creativity and imagination. Setting an objective of teaching about snowshoes can go something like this: “My objective is for kids to be able to recognize major styles of traditional and modern technical snowshoes.” Here is a method to reach this objective.

At Treehaven, a 1,400-acre backcountry extension of the University of Wisconsin-Stevens Point, I facilitate Parents and Kids Snowshoe Weekend events. At these events I managed to collect one pair of many traditional snowshoes, including the Alaskan, Mich., or beaver tail, bear paw, green mountain modified bear paw, and Ojibwa. I also secured three different modern snowshoes including two styles of aluminum frame and a plastic mold-injected model.

Kids ages five through 10 each held a different snowshoe at the front of the class. As I went from child to child holding snowshoes, I asked the other children to tell me why they think the snowshoes were made the way they were. With fun and interesting answers, I then added all kinds of information about each snowshoe and gave the name of the snowshoe. They would all repeat the snowshoe names.

At the end of the session, I handed out poster paper and color crayons. The kids were asked to draw a pair of snowshoes that was of most interest to them. Each of the kids then told the name of the snowshoes they drew and why they selected the style they did. Children were learning about snowshoes with this hands-on approach followed by a creative drawing activity. I used similar hands-on activities for teaching kids about the parts of a snowshoe, such as frame, decking, binding, and traction device.

A measure as to whether kids were learning about snowshoes came about at the end of the weekend when we played an indoor life-size board game we call Snowshoe Shuffle. About 60 plastic snowshoes were laid out on the floor of a classroom in the form of an “S.” Spaced between the snowshoes were color-coded sheets of paper. Each team was made up of three children and one adult. They selected a team color. One of the kids carried a snowshoe as a live game piece. The second child rolled a large die. The game-piece child physically moved to the number of spaces indicated on the die.

If landing on their team’s color, the adult would read a multiple-choice snowshoeing question. The third child on the team gave the answer after consulting with kid team members. The first team to cross the finish line and correctly answer their last question won. Kids were answering questions about snowshoes and snowshoe anatomy accurately most of the time, indicating they were remembering almost everything taught to them over the course of the weekend. Games can be an exciting teaching tool.

Teaching history can be fun, for both the teacher and the student. Whether it is teaching small children or college students about snowshoe history, I find story telling to be a method that seems to cross all age levels. Most often I tell my stories when out on snowshoe trails and in other outdoor areas, such as along an old farmer’s fence, on a footbridge, or down by a frozen stream. It adds to the ambiance of the stories.

Some of my favorite stories relate to tales about how the Ojibwa Native Americans used snowshoes. After a first snowfall the tribes would do a snowshoe dance around a tall pole with a pair of snowshoes suspended from the top. The dance was in hope of a successful hunt for the season. Ojibwa women would use bear paw snowshoes around their village because the rounded snowshoes were easy to maneuver around close areas. Hunters on the other hand needed snowshoes with good tracking for deep snow. I set good rapport with my audience when I referenced that my great, great grandmother was considered a “metis” (a child of mixed parents; for her French Canadian and Ojibwa). Being an Ojibwa descendent helped to captivate my student’s interest.

I also tell how snowshoes evolved as they spread out from central Asia about 6,000 years ago, to the west to form skis, and to the east across the Bering Straits into North America to form snowshoes. To do this, I use a good-sized map of the world and point out the direction of the snowshoe evolution movement. I also use pictures of some old and even ancient snowshoes and combine them with stories. All this can be done outdoors as “trail stops” while on snowshoe hikes. I just pack my props in a daypack and select interesting locations along the trail to stop and do activities.

Another approach that works well with children is reading stories. A fun book is “Snowshoe Thompson” by Nancy Smiler Levinson, based on a true story. John Thompson was a legendary skier from the mid 1800s. He heroically skied across the Sierra Mountains during winter to assure people would get their mail and the local folks fondly named him “Snowshoe Thompson.” At our Parents and Kids Snowshoe Weekend, kids were wide-eyed while listening to this story around a warming campfire following a long day on scenic snowshoe trails.

As most teachers know, stating your objective and finding a method to reach it is one approach to accomplishing student learning. Parents can adapt this approach to teaching their children to snowshoe. All it takes is a little creativity and you can come up with a myriad of teaching tools to help your child learn to snowshoe and learn about snowshoeing.

What do I want them to learn? Whatever it is I can teach them about the exciting sport of snowshoeing.